Streaming live from the Arctic: the Northwest Passage Project

The 18-day Northwest Passage Project research expedition will depart on July 18 from the U.S. Air Base in Thule, Greenland, aboard the Swedish Icebreaker Oden, returning to Thule on August 4 after a 2,000-nautical-mile voyage through the Northwest Passage. 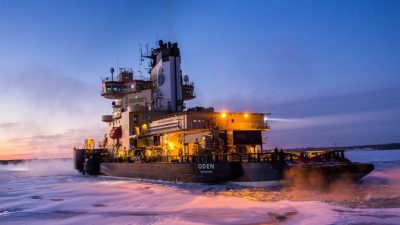 The Swedish Icebreaker Oden will take scientists, students and filmmakers on a 2,000-nautical-mile journey through the Northwest Passage to document climate change in the Canadian Arctic. (Photo courtesy of Northwestpassageproject.org)

A group of American and Canadian scientists are preparing to embark on a two-week research mission through the Northwest Passage.

Led by the University of Rhode Island’s Inner Space Centre, researchers will collect water, ice and air samples to help better understand the effect of climate warming on the environment and biodiversity in the Canadian Arctic.

Members of the Northwest Passage Project will depart from Greenland on Thursday, July 18, aboard the Swedish icebreaker Oden, equipped with the technology to share real-time observations and live broadcasts.

Mia Otokiak is a junior technical advisor at the Nunavut Impact Review Board in Cambridge Bay, who also works with Ikaarvik, a Nunavut youth initiative that acts as a liaison between southern researchers and northern communities.

Otokiak and her cousin Gibson Porter, another Ikaarvik member in Gjoa Haven, have both been invited to join the expedition as advisors and early career scientists.

“At this point with climate change happening so rapidly here in the Arctic, I think all the research we’ll be doing will be helpful in giving us some new baseline data,” Otokoak said.

“It might not seem like it, but all of this research is really important: the physics of the ocean’s circulation; knowing the changing conditions on the land and in the ocean.”

The expedition has four teams each working on a different research area: aquatic habitats, marine birds and animals, the melting Arctic and ocean physics.

For her part, Otokiak decided to work with the research team looking into marine birds and animals, out of her own personal interest.

Although Otokiak doesn’t see many whales around her home community, she hopes to see those species on the expedition.

Otokiak will make her way to Thule, Greenland, to board the icebreaker.

The expedition’s first stop is Pond Inlet on July 20, when the team will livestream the first interactive broadcast from the Northwest Passage.

“Sharing it with the communities in Nunavut is amazing,” Otokiak said, “Being able to do these live broadcasts to so many places across Canada and the U.S. This is information that will be shared with the whole world.”

From Pond Inlet, the expedition will sail through Lancaster Sound to Barrow Strait, stopping in Resolute. The group will then sail west to Melville Sound and south into Prince Regent Inlet on its way back to Greenland.

The Northwest Passage Project also has filmmaker David Clark aboard, who will produce a documentary on the expedition.

Learn more about the project here.