“Part of my healing journey has been, the more I learn about my ancestors, the more I realize, that’s the story we must invest in” 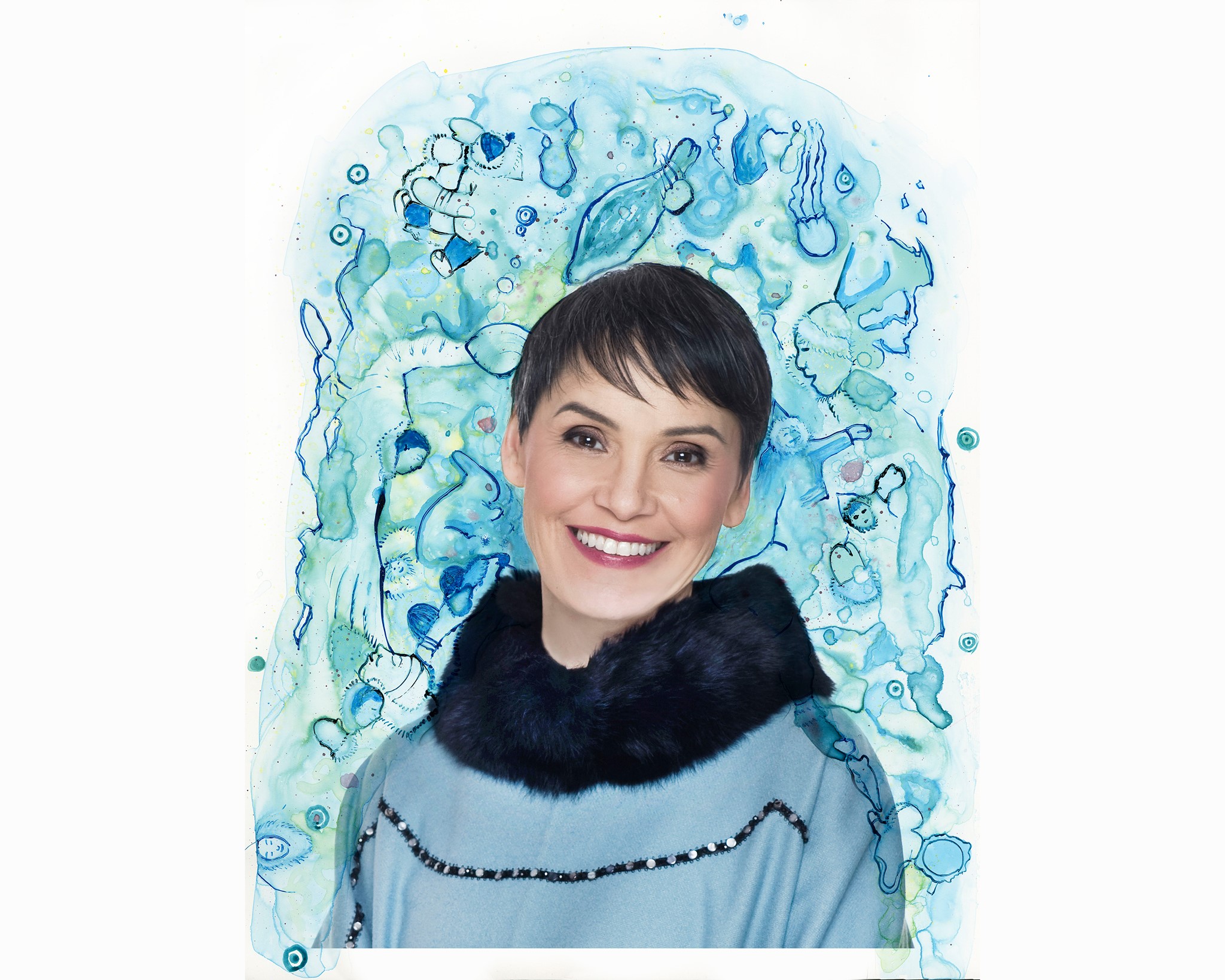 Before Aglukark entered, the band—or bands, as Aglukark’s bandmates sat in the front half of the massive stage, while the NAC Orchestra were arranged behind them—started too early. The video screen, positioned above the stage, flashed to life with images of ice and snowy tundra.

After a few seconds, the music stopped. The screen went black. And the audience waited in confusion. But none of that mattered when Aglukark walked onstage.

The audience, cheering, was ready for a night with an icon.

The concert, held on Friday, Sept. 20, was a collaboration between Aglukark and the NAC Orchestra as part of the lineup for Mòshkamo, an Indigenous arts festival that rang in the centre’s new Indigenous Theatre program.

It was one of three shows headed by Aglukark. The singer-songwriter also hosted Northern Adventures, a youth-focused show introducing Inuit culture through song and storytelling, alongside Silla and Twin Flames. The orchestra also accompanied those shows as well. Northern Adventures played Saturday, Sept. 21, and Sunday, Sept. 22.

While a night with the orchestra and a youth-focused educational show may sound like they have little in common, each concert had a quality consistent in Aglukark’s work: a strong and thoughtfully crafted story.

And, for her September shows, themes of reconciliation heavily shaped that story—especially in the form of healing.

That idea decided the narrative of her first concert for Mòshkamo. The evening followed the story from Inuit ancestors up to now. Rather than begin the show on a darker note, focusing only on traumas that Inuit are recovering from, Aglukark chose to balance those stories with what Inuit are working towards.

“Part of my healing journey has been, the more I learn about my ancestors, the more I realize, that’s the story we must invest in,” Aglukark said.

“I grew up in an environment where I was surrounded by alcohol and drugs and I thought that was normal.… So I would hear Inuit and environment, and I would immediately think, well, that’s what I know. And then when I learned about the ancestors, and how brilliant they were, how resilient they were, how we were painted this picture of these happy smiling Eskimos and ‘look how cute they are.’ But wait, they were much larger than that. What’s that story?”

Aglukark used more than music to present this story. Positioned above the stage, a large screen presented video throughout the evening. Sometimes, it played music videos to accompany the songs performed onstage. Other times, it showed minutes-long documentaries, highlighting different points in Inuit history. Near the end, the screen even showed a slideshow of Aglukark’s family.

The images were included to convey the realness of the stories being presented. “Senses are important telling truths,” Aglukark said.

“We engage as many of the senses, so when they [audience members] walk away, they walk away having shifted something in them.”

It wasn’t just the September 20 concert that was based in themes of reconciliation, however. The Northern Adventures shows were also born from ideas of healing and the power of narrative, even though the show itself focused more on cultural education.

“There’s so much work to do before we can really truly begin to reconcile,” Aglukark said. “Part of it is, what’s our story? We didn’t learn this in our schools.… And as much as we live traditional lives in our communities … there’s a lot we lost, because it was not part of our conventional learning. And so reconciliation has to be part of getting that story back.”

With her focus on story, it’s surprising to learn that Aglukark doesn’t work with a specific audience in mind. “I like to create and wait to see who responds,” she says.

“We’re all healing from something,” Aglukark explained. “We’re all on a journey. Even from the very beginning, with the Arctic Rose album, when I wrote the very personal stuff in that album. I hadn’t set out to be a public figure.… I hadn’t planned on becoming the voice of abuse for so many. And it happened, and I wasn’t prepared for it. But I realized, it can’t become the job.”

Beyond the themes of reconciliation and story, another reason these events were so exciting was the collaboration between Aglukark and other artists.

While her partnership with the NAC Orchestra worked because many of Aglukark’s songs had string parts that could transfer over, the collaboration was built just as much on excitement as practicality. “Yeah! Yeah, no-brainer there,” Aglukark said, describing her response when the centre proposed a concert with the orchestra.

In Northern Adventures, meanwhile, Aglukark worked with a diverse range of Inuit talent: musicians such as Silla’s Charlotte Qamaniq and Cynthia Pitsiulak and Twin Flames’ Jaaji and Chelsey June shared the spotlight with Aglukark. Nunavut Sivuniksavut students also took part, both onstage and in preconcert activities.

The artists all come from different genres, from traditional to folk to trip-hop, but Aglukark says that everyone came together through the shared theme of the North.

“I think that’s going to make putting these kinds of events together easy. If the theme is the North, what’s the story? Stories [are] always the traditional way of the Inuit, and part of that is always our music and the drum.”

It’s also exciting, she said, because with organizations like Qaggiavut and Nunavut Sivuniksavut promoting and developing Inuit talent, there’s a growing group of artists to call on for collaboration.

However, Aglukark also acknowledged that shows like her Mòshkamo concerts are rare: “I get a show of this size maybe once every three or four years.”