Joe Panipakuttuk on the St. Roch: Through the Northwest Passage 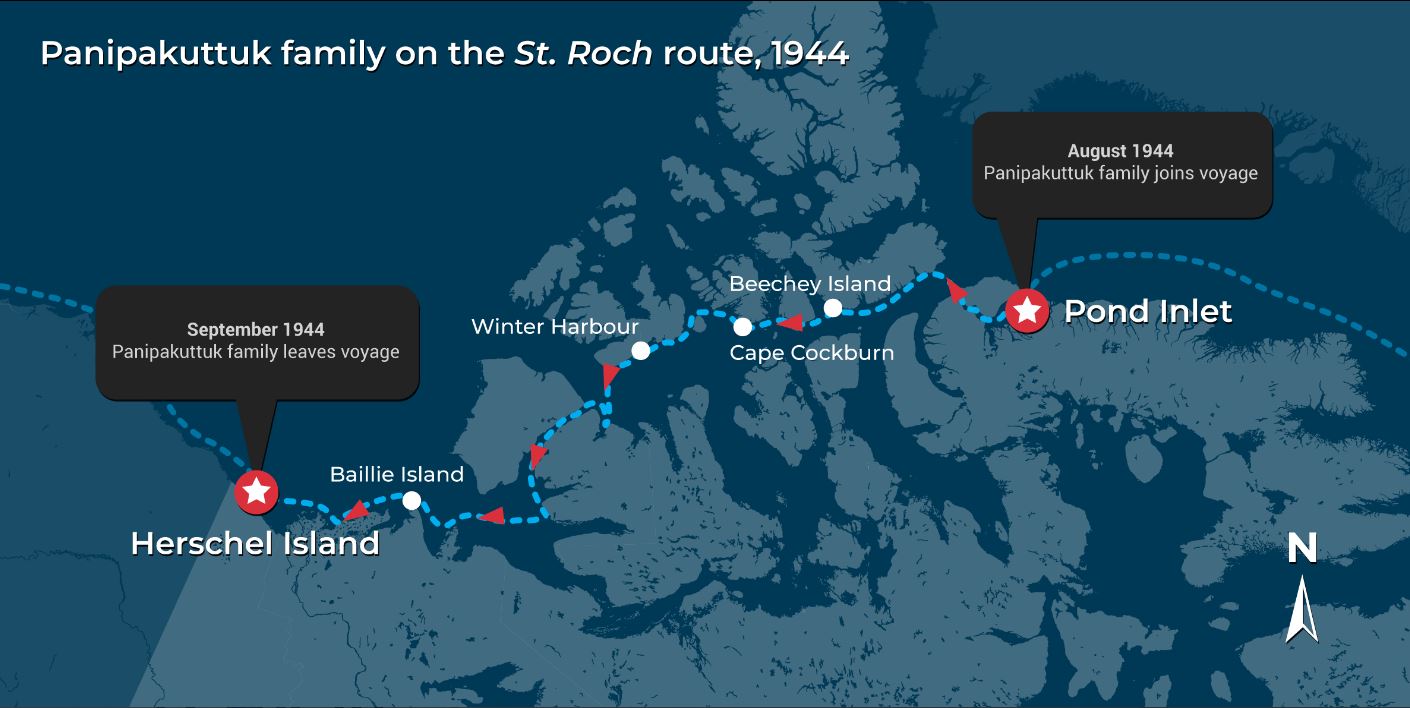 A map showing the Panipakuttuk family’s voyage on the St. Roch in 1944. (Image courtesy of the Prince of Wales Northern Heritage Centre/Government of the Northwest Territories)

In 1944 the tiny Royal Canadian Mounted Police vessel St. Roch headed north from Halifax, bound for Vancouver via the Northwest Passage. En route, Captain Henry Larsen stopped his vessel at Pond Inlet, the site of a police post since 1922. His purpose was to pick up an Inuit family who would provide assistance to him through the icy waters of Canada’s far north.

Two years earlier, the St. Roch had arrived in Halifax by making the same journey but from west to east. That journey had taken 28 months, including a winter in the Arctic. On that voyage, Larsen had no Inuit assistants. But a winter in the Arctic was nothing new for the veteran captain. Norwegian-born, Larsen had spent many years in the Canadian North. His vessel had been built in 1928 as a patrol and supply ship for the police, and had often wintered in the Arctic. Larsen once described it as “ugly, slow and uncomfortable to live on” but with “many good qualities in a tight spot and especially in the waters she was built for.”

In Halifax, the St. Roch had spent 1943 and early 1944 being refitted. Canada was at war, so when the little vessel finally left port, once again commanded by Larsen and carrying a crew of 10, its mission was shrouded in secrecy. The mission was to maintain Canadian sovereignty in the Arctic and assess the feasibility of supplying far northern posts in the eastern Arctic from the west, in the event that German U-boat activity increased and became a serious threat. 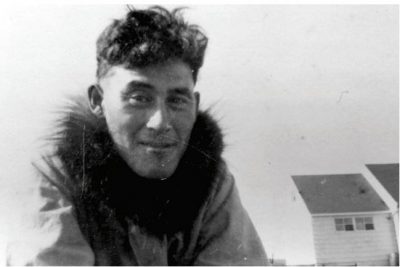 On Aug. 12, the vessel put in at Pond Inlet to pick up an Inuit family who would assist the crew on its passage. Joe Panipakuttuk was a hunter who had been born at Igarjuaq, a whaling and trading site just east of Pond Inlet, in 1914. He was accompanied by his wife, Letia, three children under 10 years of age, and his mother, Panikpak, who went along as seamstress. Panikpak insisted on bringing her granddaughter Mary Panigusiq, whom she was raising. Joe was also accompanied by his 15-year-old stepson Aariak (sometimes spelled Arreak). Larsen considered Joe and Aariak to be natural-born seamen. Seventeen sled dogs were also loaded in Pond Inlet. The crew’s quarters were limited, and so the Inuit lived in a tent on the deck.

There have been many books and articles written about the St. Roch’s voyage, but it is not well known that Joe Panipakuttuk also wrote an article containing his reminiscences about the trip, in Inuktitut syllabics. It was published in Inuktitut Magazine in 1968, and translated and published in “north” magazine the following year. He starts his memories with this:

“I remember I left Pond Inlet on the RCMP boat in the summer of 1944, on the 17th day of August. On our way we stopped at Nalluaq where I got two dogs. Captain Larsen obtained two narwhal tusks at this place. I shot one bear when we were leaving. On crossing Lancaster Sound from Nalluaq a very heavy gale set in….”

They crossed the sound safely and coasted westward along the south shore of Devon Island, making a stop at the abandoned police post at Dundas Harbour. On Aug. 20, Joe wrote, “We arrived at a small island off the west end of the big one we had been sailing alongside.” They had reached Beechey Island, which is well-known in Qallunaat histories of the Arctic as a place where Sir John Franklin and his ill-fated crew wintered on their way into the central Arctic. But that meant little to an Inuit hunter and guide. Joe simply wrote, “It is said that in the old days some white men got lost and the head of the expedition was never found although many ships had called here searching for him. The name of the man was Franklin. On the island I saw some stone markers and graves of white men.”

One of Joe’s tasks was to provide fresh meat, and he was, of course, successful at doing so. “Two days later we left for Resolute Bay,” he wrote, “and on the way I killed three walrus and a fourth at a place where the boat was touching the bottom because of the shallow water.”

He recorded that Larsen and his crew erected cairns—inuksuks—at a number of places where they stopped. They went ashore on Dealy Island, a small island off Melville Island, and Joe noted the remains of a building there. “It is said that there was once a shipwreck,” he wrote. “The building was made of rock with a wooden roof. They had a lot of firewood inside and quite a lot of food. The crew of this wreck had been found, it is said; they did not starve. There we found old clothing and canned food which they had left.” This was the remains of a site known to history as Kellett’s Storehouse, built in 1853–54 by Henry Kellett, captain of the ship Resolute, as a refuge and supply depot for sailors in distress. It was built of local stone and its walls were four feet thick. When it was completed, it was estimated to hold enough provisions for 66 men for seven months. (I wrote about Kellett’s Storehouse in Taissumani on Dec. 14, 2007.) Henry Larsen thought that nothing useful remained; it was “partially destroyed and its contents scattered everywhere by marauding bears.” The shipwreck Joe referred to was probably that of the Investigator, farther to the west, which was abandoned in 1853 and subsequently sank.

Being from Baffin Island, Joe had never seen muskox before. Travelling with Larsen on Melville Island, the captain told the hunter that there were muskox there. “I went to where he directed me,” wrote Joe, with some amusement. “I searched the land with a telescope and saw no sign of live animals. All I could see were huge rocks. Mr. Larsen said that these were musk oxen, these very things I thought to be rocks. So I looked again through the telescope and the rocks began to move. We got near the musk oxen and I found out that they were carrying something on their backs. I thought to myself they must be carrying their little ones, but I soon learned that this was part of the animal. When you see musk oxen for the first time, they have such a huge back on them!”

Compared with the west-to-east voyage of a few years earlier, the 1944 voyage went off without a hitch. Joe guided the ship ably through the ice and he and Aariak hunted for fresh meat for the crew.

But Joe wasn’t the only one whose knowledge of the land and sea was put to use. One crew member later remembered, “One time in the Passage we weren’t sure where we were. Even Larsen was unsure. Then the Eskimo woman [Panikpak] looked at the coastline and checked with the chart. ‘That’s where we are,’ she said. And that’s where we were!” 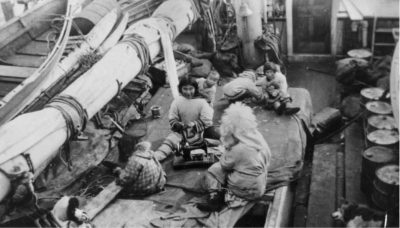 Joe Panipakuttuk’s family on the deck of the St. Roch in 1944. The crew’s quarters were limited, so the Inuit lived in a tent on the deck. (Harper collection)

The Inuit liked Larsen. They called him Pallursi—a word that describes someone with eyes that slope downwards at the outer corners—perhaps a sailor’s squint developed from years at sea. Joe’s daughter Sophie (Soopi) remembered him years later as “a straight man but a nice one,” adding, “His crew was the same way because he made them that way.” She remembered that the cook used to feed her and the family after the others had eaten, and that she especially liked spaghetti. But Mary Panigusiq, then aged 6, disagreed: “Oh, the smell of the spaghetti that the cook would bring to my uncle at the tent. I never smelled anything so bad.”

In fact, Mary would say, later in life, when she was well-known under her married name of Mary Cousins, “I hated the trip. I was very young and I was always worried. The older people didn’t worry but it was terrible living in the tent on the deck. The water would come right into the tent and I got scared.”

The Inuit were excited, but also a little nervous, to finally meet other Inuit when they reached Holman Island. “For the first time since leaving Pond Inlet we would now get to see a strange people and we began to feel shy,” wrote Joe. Ashore, the Inuit were welcomed into the home of a man named Kanguaq. Joe noted that the settlement had only two white people, the missionary and the Hudson’s Bay Company trader. “We stayed overnight there and left the following day for Tuktoyaktuk,” he wrote.

About Tuk, he said, “That was the first time I ever heard Eskimos talk English” among themselves.

Finally, the St. Roch reached the old whaling outpost of Herschel Island off the Yukon coast. It had been arranged that the Inuit would disembark and spend the winter there, while Larsen would take the vessel on to Vancouver. “There was a house ready for us to live in,” wrote Joe. Larsen left “and we were alone there. When I looked through my binoculars and saw there was a house, some dogs and people, I became nervous. The people looked so different.”

Look out for the next instalment of this story, Winter at Herschel Island, and getting home