A School for Inuit Explorers 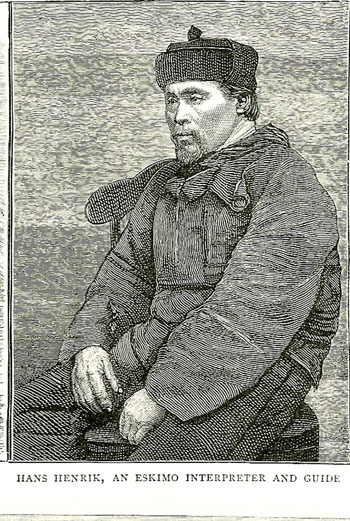 Hans Hendrik of Greenland, a famous Inuit guide celebrated for helping to save the lives of those who survived the ill-fated Polaris expedition.

A newspaper article published in 1882 was way ahead of its time.

In that year the Richwood, Ohio “Reporter” published an article called simply “The Esquimaux” (using the old French spelling of Eskimo). In it, the reporter, heaped praise on Inuit for their accomplishments.

“Even the comparatively civilized inhabitants of Mexico never constructed arched vaults of stone as these Arctic dwellers have done [of snow],” he wrote, adding that they used sleds long before other inhabitants of the Americas and they used dogs to pull them when even the ancient Incas of Peru had never used animals in this way. And “they did this while they themselves were in the stone age.”

Moreover, the Inuit were “inventive and highly ingenious,” claimed the article, stating that no modern boat builder could compete with them in constructing light boats for rough water and “no modern oarsman dreams of such feats in the management of boats as they constantly perform.”

Their fur dressing was unmatchable. They were mighty hunters, and “they invent weapons and means of making them from bones and ivory in a land where wood is often as rare as gold.” They are skilled carvers and fashion beautiful children’s toys from ivory. They warm their huts with seal-oil lamps. They make window lights of “fine transparent sealskin.”

Moreover, they were “faithful and peaceable.” The author notes the service of Inuit guides and map-makers to many Arctic explorers. In particular, he praises the work of the Greenlander Hans Hendrik and of Baffin Island’s “Esquimau Joe”, both of whom were responsible for saving the lives of the sailors on the Polaris ice-drift.

The writer obviously thinks highly of the Inuit, but not of their homeland. It is barely possible, he claims, for a white man — even with the help of the Inuit — to live off the country, where “nature seems armed with all the horrors of one of the circles of Dante’s hell.”

Too many lives of white men had been lost in Arctic exploration because the men were unfitted, physically, to cope with the hardships of an Arctic winter. Too much money had been spent in searches for the North Pole, and then in searches for the lost searches. But the Inuit themselves exist in this Arctic desert and apparently thrive.

The writer then comes up with a novel suggestion – to educate the Inuit, but only for the limited purpose of finding the North Pole. “There is no good reason,” he claims, “why we cannot safely undertake the education of at least enough Esquimaux to enable them to learn the objects of the quest for the Pole, the conditions under which science asserts the task can best be attempted, and what to look for when the goal is reached.”

This is a suggestion made a century and a quarter before today’s discussions of the interaction that should take place between Inuit traditional knowledge and science.

“These are the people to do the work,” he proclaims. “It is for us to show them how to do it.”

He suggests the establishment of “some kind of school” to be located at an intermediate point where Inuit could live “without being rendered physically unfit for the resumption of their former mode of life in high latitudes,” and where white men could also live without material discomfort.

The next expedition north should encourage intelligent young men to relocate to this explorers’ school, he suggested. Eventually, after learning why and how to find the North Pole, they should be returned north to their own people “and left to their own devices.” The writer predicts that the expense of such an experiment may well be less than the cost of fitting out an expedition.

Before long, the author thought, news would come out of the Arctic that the North Pole had been found, “and so, perhaps, in this way might be solved the problem which thus far has vanquished the energy and skill of the civilized world.”

Of course, no school for Inuit explorers was ever established, and explorers continued for a number of decades more to search for the elusive North Pole.