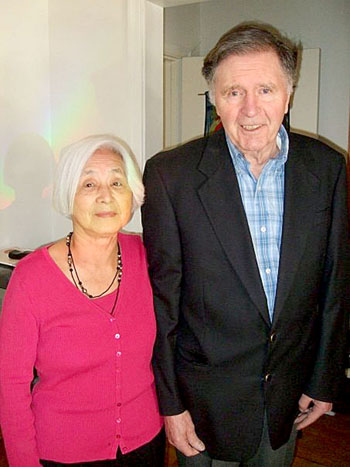 The late Keith Crowe with his wife Edna, to whom he was married for 54 years. This past May 16, Crowe, 83, died in Ottawa.

Inuit lost a great and loyal friend with the passing of Keith Crowe on May 16.

Keith Jeffrey Crowe was born in Yorkshire, England on January 30, 1927. As a young adult, he emigrated to Canada shortly after World War II. In Canada he found work as a surveyor. After working in that capacity for some time, he attended the University of British Columbia, from which he graduated with a degree in anthropology.

Keith’s study of anthropology and his interest in native people led him to accept a job with the federal government in the department that would eventually become Indian and Northern Affairs, a job that would take him north.

But first, while still in Ottawa, he began his study of Inuktitut, with Mary Panigusiq (later Mary Cousins) and Bob Williamson as his teachers.

Then, with his wife and young daughters, he moved to the Arctic in 1960. That first summer was spent in George River in Ungava Bay, working as a project officer with an Inuk entrepreneur, George Koneak, who also helped him in his continuing study of Inuktitut.

From George River the family moved to Fort Chimo, now called Kuujjuaq, where Keith was a government administrative officer for two years. Then they were off to Pangnirtung for another two-year posting.

Even in those days, half a century ago, the social landscape of the Arctic was changing rapidly. Few newcomers to the north bothered to learn to speak Inuktitut, but Keith persevered in his study of the language and acquired fluency.

He knew what others didn’t, that a facility in Inuktitut would help him in his work and bring him closer to the Inuit, for whom he developed a respect that would remain with him for the rest of his life. That respect was mutual. Keith was given an Inuktitut name — Tulugaq — a direct translation of his surname.

After Pangnirtung, Keith relocated with his family to Vancouver where he again attended the University of British Columbia, this time earning a master’s degree in geography. Field work for his thesis took him to Igloolik for two summers of research. The thesis that resulted was eventually published by the Northern Science Research Group of the Department of Indian Affairs and Northern Development under the title “A Cultural Geography of Northern Foxe Basin, N.W.T.”

Keith was an excellent writer and he demonstrated his passion for northern history and culture with another, more popular book, “A History of the Aboriginal Peoples of Northern Canada,” published by McGill-Queen’s University Press in 1974.

This book has been a perennial favourite, used in schools and purchased by the general public and increasingly by Inuit themselves. It was republished in 1991 with additional material on the rapid changes that had happened in the North since its first publication, especially material dealing with land claims, some of which had been settled by that time, some still under negotiation.

In his writing, as in conversation, Keith always talked about northern history from a native perspective, always sensitive to the often unrecognized contributions of Inuit to our evolving understanding of northern history and science.

Keith worked tirelessly as an advocate for Inuit. Although a government employee, he was seconded to work on the Inuit side of the negotiations that eventually led to the James Bay Agreement. He worked closely with Charlie Watt, then political leader of the Inuit of northern Quebec. Here again his knowledge of Inuktitut stood him in good stead.

In 1970, again because of his fluency in Inuktitut, he was asked to accompany a group of Inuit, many of them monolingual carvers, to Expo 70 in Japan.

Keith retired in 1985 but maintained a passionate interest in the north. In March of 1999, on the eve of the creation of Nunavut, he called me. He wanted to come to Iqaluit to join in the once-in-a-lifetime celebrations that would herald the reality of Nunavut, a dream that had once seemed impossible but that Keith shared with his many Inuit friends.

But he couldn’t find any accommodation — there was not a hotel room to be had in the capital. I was happy to offer him a bed, knowing that a few evenings of interesting conversation on northern topics would be my reward.

Keith was a dedicated family man. He wrote poems and stories for his children and grand-children. He played the guitar and sang. An outdoorsman, he loved camping and was never more happy than when paddling a canoe.

Keith was predeceased by his daughter, Wendy, who passed away while still in her teens. He is survived by his wife Edna and their two daughters. Kathleen is a teacher in Goose Bay. Sheila is a gastroenterologist at the University of Virginia. He also leaves four grandchildren.

Keith Crowe will be remembered fondly as a man who loved the north and who worked tirelessly for the betterment of Inuit at a time of intense social change. Rest in peace, Tulugaq.