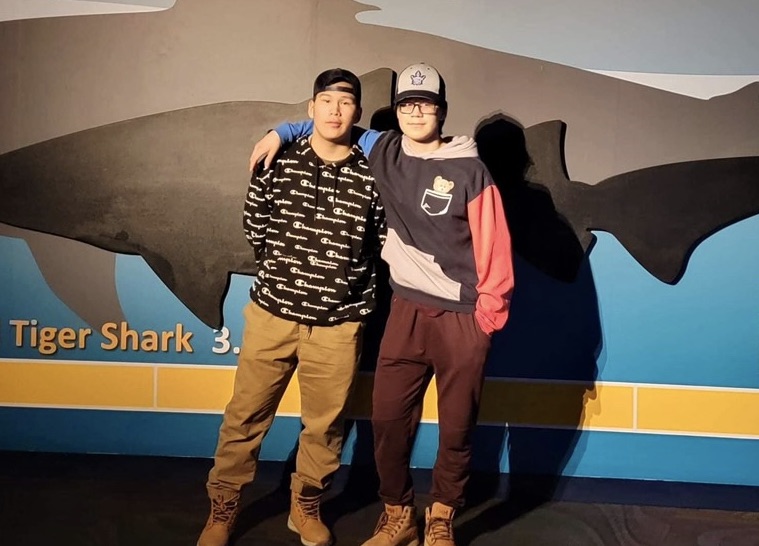 Darius Aleekee (left) and Jonathan Eetoolook, from Taloyoak, spent five months at the Academy of Hockey Training and Development in Gravenhurst, Ont., with help from a non-profit sponsorship. When they weren’t on the ice, the teens got to visit nearby sights like the Ripley’s Aquarium in Toronto, pictured here. (Photo courtesy of Darius Aleekee)

After spending five months perfecting their passes and shots on goal, Darius Aleekee and Jonathan Eetoolook are back home in Taloyoak and practising what they learned at the Academy of Hockey Training and Development.

The high schoolers spent much of the past season in Gravenhurst, Ont., on ice at the sports organization that offers high-performance training for youth who want to improve their hockey skills.

The boys were able to join the academy last December with sponsorship from the non-profit Indigenous Kids Network of Canada and the Inuit Child First Initiative, a government-funded program to help Inuit youth access health, social and educational support.

“Five months was long, but we made it through,” said Aleekee, 16, with a laugh as he spoke over the phone from Taloyoak.

He said he and his best friend Eetoolook, 17, learned a lot about the sport and how to improve their playing styles.

Aleekee, who plays defence, said his speed on the ice has improved, while Eetoolok, a left winger, said he learned to “battle hard” for the puck and use his full body when going on offence.

“The coaches taught me so much about hockey on ice and off ice,” said Eetoolook, who describes hockey as his biggest passion.

“During on-ice practice, they taught us how to play our positions properly, such as 1-3-1 (formation) which is our teammates protecting our (mid-ice) zone from the team we’re challenging.”

Eetoolook said he’s also better now at making plays and set-ups, and his positioning when the puck is in his own team’s end is better.

Off-ice sessions included fitness and strength training, and education in nutrition and hydration.

The teens lived together with a host family for the five months they spent in Gravenhurst, and worked with a tutor to keep up with their schooling.

When they weren’t playing hockey or studying, the two spent their time bowling, hanging out at restaurants or going for walks. They also got to check out some tourist attractions, like the Ripley’s Aquarium and Royal Ontario Museum in Toronto.

When they returned home at the end of March, Eetoolook and Aleekee wasted no time putting their newfound skills to the test — both have already competed in tournaments, Eetoolook with the Taloyoak Trail Blazers and Aleekee with another local team.

Eetoolook hopes to one day pursue a career in hockey, while Aleekee has dreams of becoming a doctor while coaching young players in his home community.

If they can secure another sponsor, the pair said they’d love to return to the academy next season.

“My favourite experience was everything I did,” Eetoolook said of his time down south. “I’ve learned and made friends, family and brothers. We all improved so much.”

“I like to say a big thank you to everyone that supported me through the five months,” Aleekee said.

“It was a great experience, the best I’ve experienced yet.”