The return of the dog-children — Parry and Lyon at Igloolik 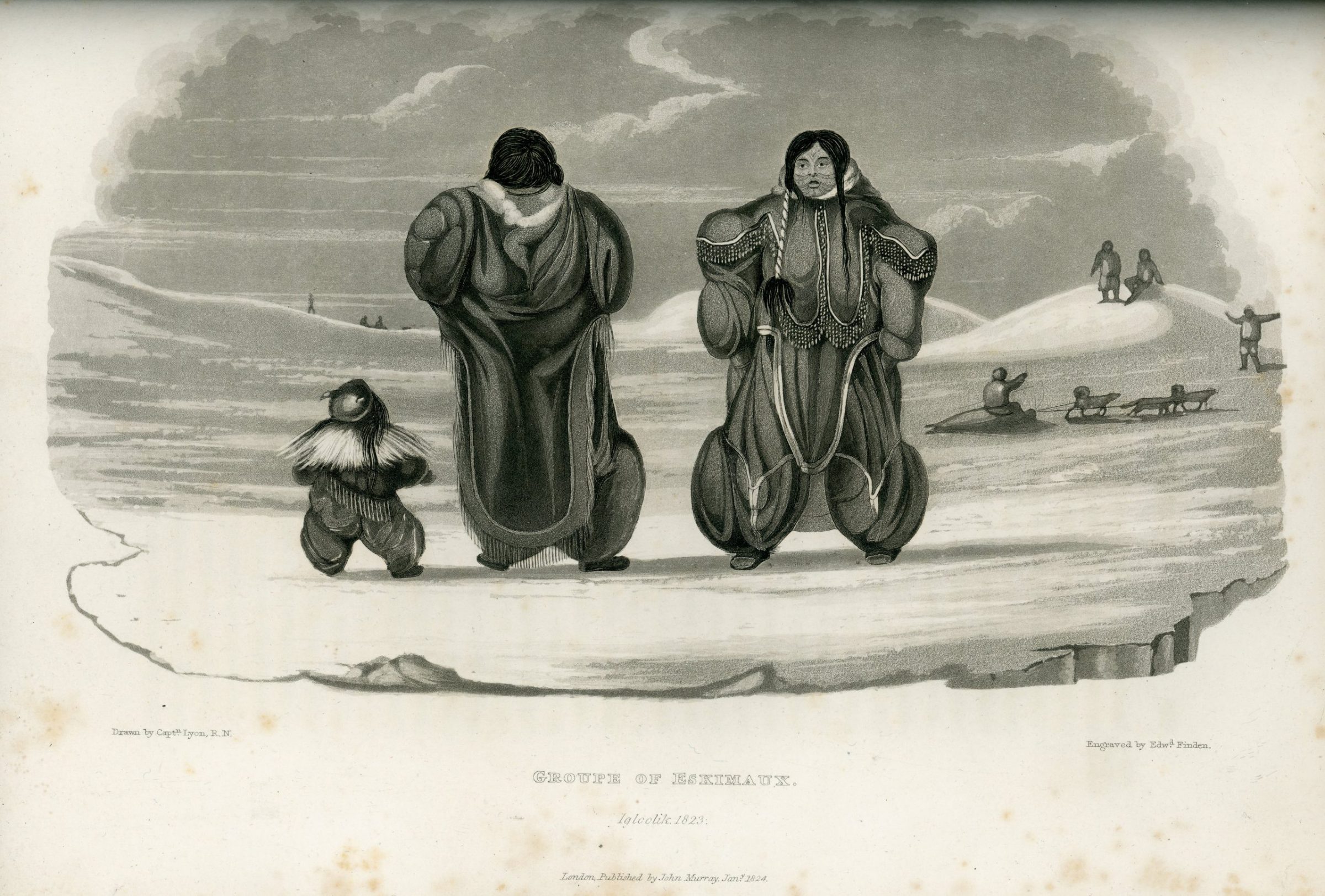 A group of Inuit at Igloolik. This illustration is from William Parry’s narrative, published in 1824. It’s from a drawing by George Lyon, engraved by Edward Finden. (Source: William Edward Parry: Journal of a Second Voyage for the Discovery of a North-West Passage)

When John Ross sailed into the waters of farthest northern Greenland in 1818, he became the first Qallunaaq to meet the isolated Inughuit — the Polar Eskimos.

But his visit had been foretold by a woman of the tribe some years earlier, who prophesied that “a big boat with tall poles would come into view from the ocean.” When Ross’s ship, the Isabella, hove into view, the Inuit thought it a marvel, “a whole island of wood, which moved along the sea on wings, and in its depths had many houses and rooms full of noisy people.”

Five men first approached the ship with some trepidation. Thinking it to be a living thing, they addressed it, calling out: “Who are you? What are you? Where do you come from?” John Ross was in the enviable position of having an interpreter on board, a Kalaaleq from Disco Bay halfway down the west coast of Greenland, who could make himself understood by the Inughuit, although their dialects were very different. The hunters asked him, “Is it from the sun or the moon?”

They imagined that each of the ship’s masts was a tall man who had come to destroy them. The interpreter could not convince them that the ships were not living beings — they asked whether the ship could fly as well as swim, because they had seen it flap its wings.

Four years later, two ships hove into view in an isolated part of the Canadian Arctic, near Igloolik in Foxe Basin. The commander, William Edward Parry, in charge of the Fury, had been second in command on Ross’s expedition to Greenland. He had encountered Inuit on that voyage and would now meet members of a different group, speaking a different dialect.

His second in command in 1822 was George Francis Lyon, in charge of the Hecla; he had joined the Royal Navy at the tender age of 13, and served in North Africa from 1818 until 1820. This was his first voyage to the Arctic and his first encounter with Inuit. 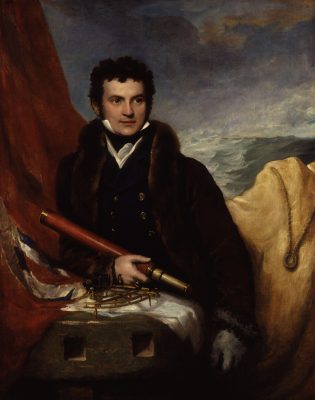 The two ships had spent the previous winter at an island the explorers called Winter Island, east of Repulse Bay at the mouth of an inlet that Parry named after Lyon. It was not until Feb. 1, with the ships firmly iced in for winter, that Inuit first visited the ships.

There is unfortunately no record of what the Inuit of Igloolik made of these two ships sailing into their waters the following summer. They would surely have heard from their fellow countrymen that spring of the ships’ arrival in Foxe Basin, for spring is the season when travel is easiest in the Arctic and news travels quickly, if only to break the winter monotony.

They may have been as mystified as the Inughuit had been a few years earlier. Or they may have already heard of such vessels from Inuit even farther to the south who were familiar with Hudson’s Bay Company vessels that travelled to Churchill and sometimes plied the waters north from there to Marble Island to trade.

But whether or not they were familiar with ships didn’t matter — once the ships had freed themselves from the clutches of the ice at Winter Island and reached Igloolik, the Inuit quickly discerned Parry’s reason for having come to their shores.

John Barrow, the powerful second secretary of the Admiralty, had dispatched Parry and Lyon to search for a passage west — the elusive Northwest Passage. John Ross had earlier bungled an attempt to find the passage through Lancaster Sound, earning Barrow’s ire. Parry and Lyon would now search for it in the little-known waters of Foxe Basin. But the Inuit knew none of that. They had their own ideas to explain the presence of these newcomers in their waters.

The clue to their deciphering of Parry’s purpose in coming to their land was their observation that he collected human skulls on the island.

“We were not a little surprised to find also a number of human skulls lying about,” Parry wrote, adding that he was “inclined to add some of them to our collections…” The Inuit helped him in this task. They “went eagerly about to look for them, and tumbled, perhaps the craniums of some of their own relations, into our bag.”

The white men, the Inuit believed, were searching for the skulls of their own ancestors.

In Inuit legend of Uinigumasuittuq — the one who didn’t want to marry — was a young Inuit woman who refused to accede to the attentions of a succession of suitors. There are numerous versions of this tale. In one, her father, in frustration at her rejection of all potential husbands, decreed that she would therefore marry her dog. The father took her and her dog-husband to the island of Qikiqtaarjuk, where she gave birth to a litter of babies. A garrulous old woman named Orulo told the folklorist Knud Rasmussen in 1922: “she gave birth to a whole litter, some as dogs and some in right human form.”

Orulo continued, “Those of her children that were born in right human form she placed on an alaq: a piece of sole leather that goes under the sole of the kamik proper, and these she sent drifting over to land. From these, it is said, are descended all the Itqiliit, the Chipewyan.” By extension, these were therefore the ancestors of all Indians.

Then she set her dog-children on a boot-sole and, after placing three stems of grass upright on it, set them adrift, saying, “You shall be skillful in the making of weapons.” The stems of grass transformed themselves into masts, and the boot sole became a sailing ship.

There are many variations to the legend. But significantly, in one of them, Uinigumasuittuq tells her departing dog-progeny, “You will come back by ship.”

This legend and its variants are known throughout the eastern Inuit world. Uinigumasuittuq became the powerful woman at the bottom of the sea who controlled the hunters’ access to sea mammals and could wreak havoc and hunger on Inuit unless visited and placated by shamans. In some places she was known as Sanna (a name since corrupted as Sedna), in others as Arnaaluk Takannaaluk, and in still others as Nuliajuk or Nerrivik.

Parry’s skull-collecting took on particular meaning for the Iglulingmiut. The island of Qikiqtaarjuk, where Uinigumasuittuq had given birth, was by then no longer an island, post-glacial rebound having caused it to join with the main island of Igloolik. But the conclusion was inescapable — the legendary dog-children had returned. Parry was clearly searching for the skull of his mother! In fact, according to what respected elder Rosie Iqallijuq told writer Dorothy Eber in 1998, he found what he was looking for. “Paarii and his people came around here for the skull of their mother,” said Rosie, “and took it from Qikiqtaarjuk — but we didn’t see that!”

Parry may never have known of the Inuit interpretation of his arrival and his activities. But it was clear to the Inuit. He was the realization of Uinigumasuittuq’s prophesy that her dog-children would return by ship. Despite the language barrier that separated the two races, the Inuit viewed Parry as their kin. This may explain why relations between the Inuit and their Qallunaat visitors remained friendly for most of that winter.

Next column — The end of the friendship