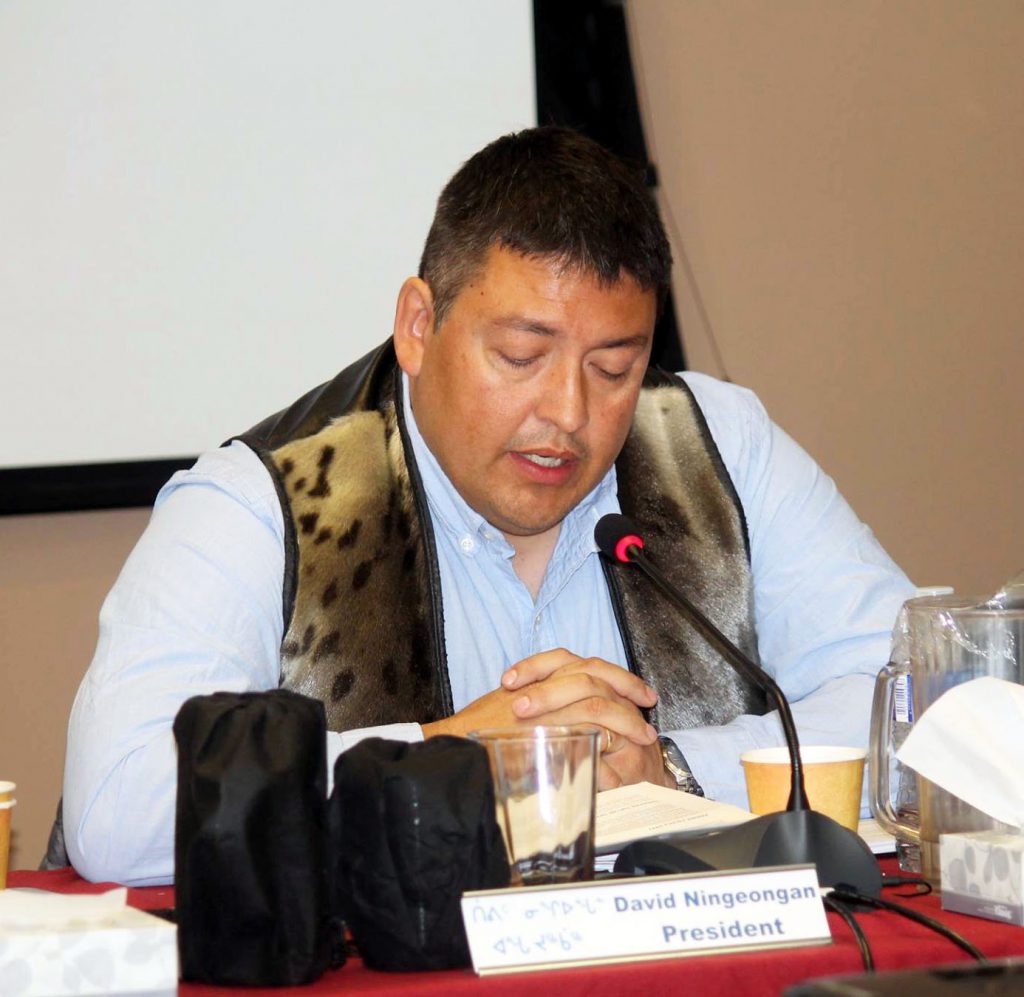 On Dec. 9, David Ningeongan will try to win his third election to the presidency of the Kivalliq Inuit Association. This time, he’s facing Stanley Adjuk of Whale Cove and Kono Tattuinee of Arviat. (File photo)

David Ningeongan of Rankin Inlet, who’s held the presidency of the Kivalliq Inuit Association since December 2011, will face two challengers in an election to be held this Dec. 9 throughout the Kivalliq region.

In that election, eligible Inuit beneficiaries in the region will choose from among three candidates: Ningeongan, plus Stanley Adjuk of Whale Cove and Kono Tattuinee of Arviat.

After winning his first election for the KivIA presidency in 2011, Ningeongan was re-elected to the position in December 2015.

His tenure as elected leader of the organization covers a period of rapid industrial development in the Kivalliq region that includes the opening of Agnico Eagle’s Meliadine gold mine near Rankin Inlet, and the start of satellite mining operations on the Amaruq property near the Meadowbank mine.

The names of the presidential candidates are on a list of accepted nominated candidates released Nov. 4 by chief returning officer Nancy Karetak-Lindell.

Another vacant executive position at KivIA will be filled by acclamation: Donna Adams of Rankin Inlet, the only candidate nominated for the position, will serve as the organization’s secretary-treasurer.

Under the organization’s bylaws, Adams, as a director, will serve a three-year term, like all other directors.

But the person elected as president will serve a four-year term.

The list of candidates for community directors is as follows:

To be eligible to vote, you must be:

• A beneficiary of the Nunavut Agreement.

• A resident of the Kivalliq region for at least 12 consecutive months immediately preceding the election day.

You can reach the chief returning officer, Nancy Karetak-Lindell, at 204-583-5493 or at kiviacro@ayaya.ca.

An earlier version of this story reported that two candidates were running for the community director position in Chesterfield Inlet. However, one candidate has since withdrawn and Peter Sr. Kattegatsiak has won the seat by acclamation.