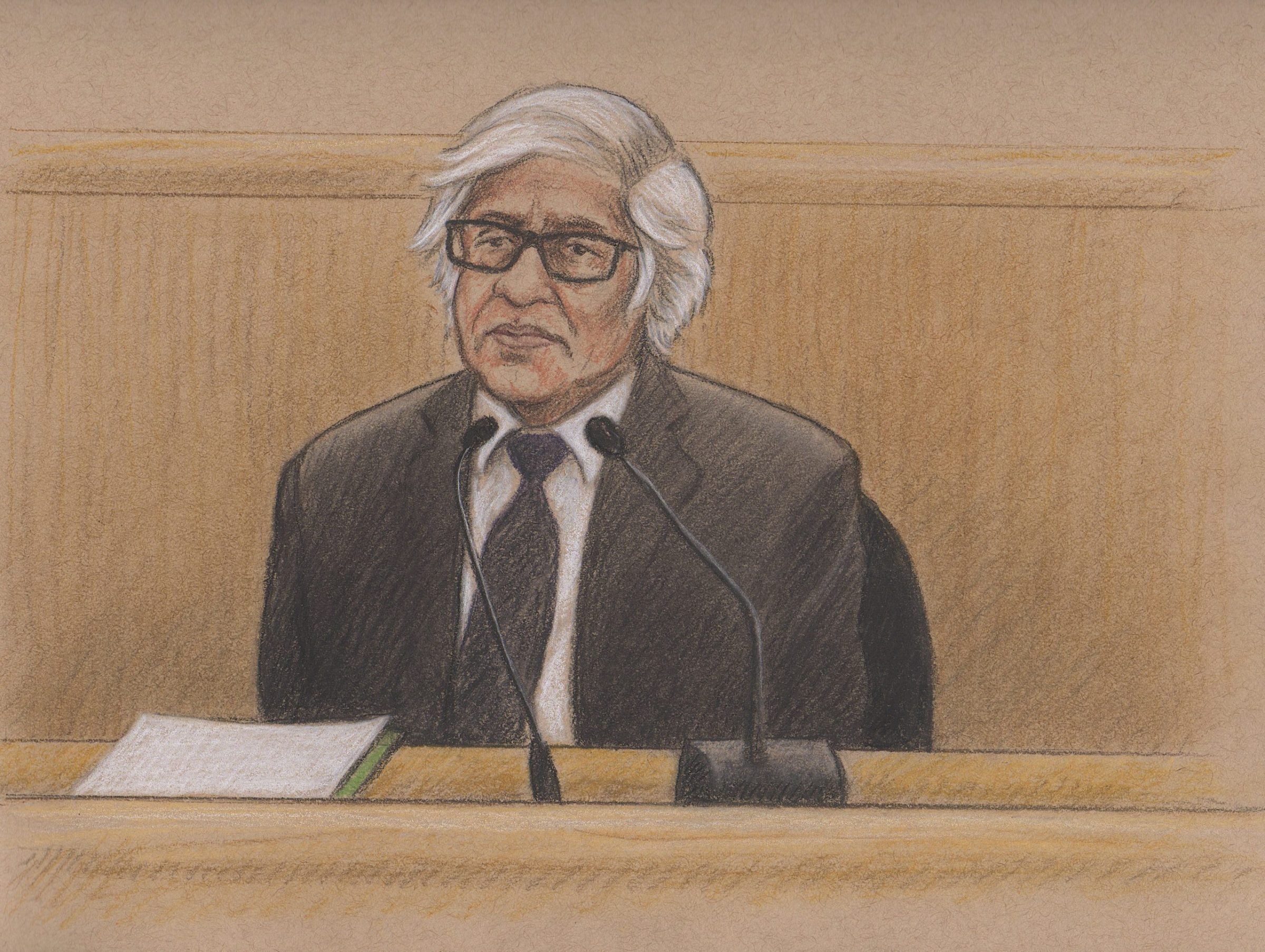 Dr. Julian Gojer testified on Thursday at the trial of Tyler Hikoalok, who is accused of first-degree murder in the 2018 death of Elisabeth Salm in Ottawa. Dr. Gojer, a forensic psychiatrist, performed an assessment of Hikoalok and concluded he has sexual deviancy, anti-social personality disorder and fetal alcohol spectrum disorder, which combined with alcohol consumption may have contributed to his actions that led to the killing of Salm. (Courtroom sketch by Lauren Foster-MacLeod)

Tyler Hikoalok’s mental state did not meet the threshold of being not criminally responsible for his actions, a forensic psychiatrist testified on Thursday at the Cambridge Bay man’s murder trial.

Dr. Julian Gojer is a forensic psychiatrist at the Ottawa Hospital who was called as an expert witness in the first-degree murder trial of Hikoalok.

Hikoalok, 22, has pleaded not guilty to the May 24, 2018 killing of Elisabeth Salm, 59, at the Christian Science Reading Room in downtown Ottawa.

Salm was found badly beaten on the floor of the centre’s study room by her co-worker. Salm died the following day at the Ottawa Civic Hospital.

There was evidence that she had been sexually assaulted, including the discovery of semen on her body that matched Hikoalok’s DNA profile.

Gojer met with Hikoalok on three occasions in September and November of this year to perform an assessment of Hikoalok’s mental state and identify potential underlying neurological conditions.

Ultimately, despite having various behavioural issues and fetal alcohol spectrum disorder, Hikoalok has the ability to understand the consequences of his actions, Dr. Gojer concluded.

The jury learned that Hikoalok showed sexually aggressive behaviours from a young age,

“A child of that age exhibiting those behaviours is unusual,” Gojer noted.

Hikoalok was also a victim of sexual abuse himself, Dr. Gojer said. Hikolaok told him that around the age of nine he was sexually abused by an older relative.

Concerns were also raised by previous psychological and psychiatric assessments that Hikoalok’s mother may have used alcohol while she was pregnant with him, causing him to have fetal alcohol spectrum disorder.

The neurological condition is evident in Hikoalok’s memory difficulties, monotonous way of speaking and being “cognitively slower than the average person,” Dr. Gojer said.

“Brain abnormalities seem to be why he has an intellectual delay,” he said, but Hikoalok can take in information and knows the difference between right and wrong.

In his testimony earlier in the week, Hikoalok said he had consumed vodka and rum the morning of May 24 before blacking out for the next 24 hours.

Someone with brain abnormalities like Hikoalok’s who drinks a lot of alcohol in a short period of time would experience enhanced effects of alcohol, such as lower inhibitions and aggression, Dr. Gojer explained.

He said that a person can have blackouts from consuming low levels of alcohol, such as when a person can’t recall certain conversations or moments from the night before.

However, for a blackout to last for 24 hours, as Hikoalok said his did, a person would have to drink a very large amount of alcohol, Dr. Gojer said.

Multiple teachers at the school that Hikoalok attended saw him around 11 a.m. on the May 24 when he came in for lunch and testified that he was acting normally.

They had testified that on previous occasions they had seen Hikoalok drunk at school, but that he did not appear intoxicated that day.

“I would say that is significant,” Dr. Gojer said.

In his report, Dr. Gojer concluded that Hikoalok has sexual deviancy and anti-social personality disorder.

“These are heinous behaviours, but they are also driven by an underlying medical problem of paraphilia, a medical problem of anti-sociality and fetal alcohol spectrum disorder,” Dr. Gojer said. Paraphilia is a condition characterized by deviant or abnormal sexual behaviours.

“When you add alcohol to that, underlying sexual behaviours … simply will manifest in a person who can’t control those impulses,” Dr. Gojer said.

Following Dr. Gojer’s testimony, the defence closed its case. The trial will resume on Dec. 7 when the Crown and defence counsels will present their closing submissions.