Meeting in Rovaniemi, Finland ends with no declaration from eight member nations 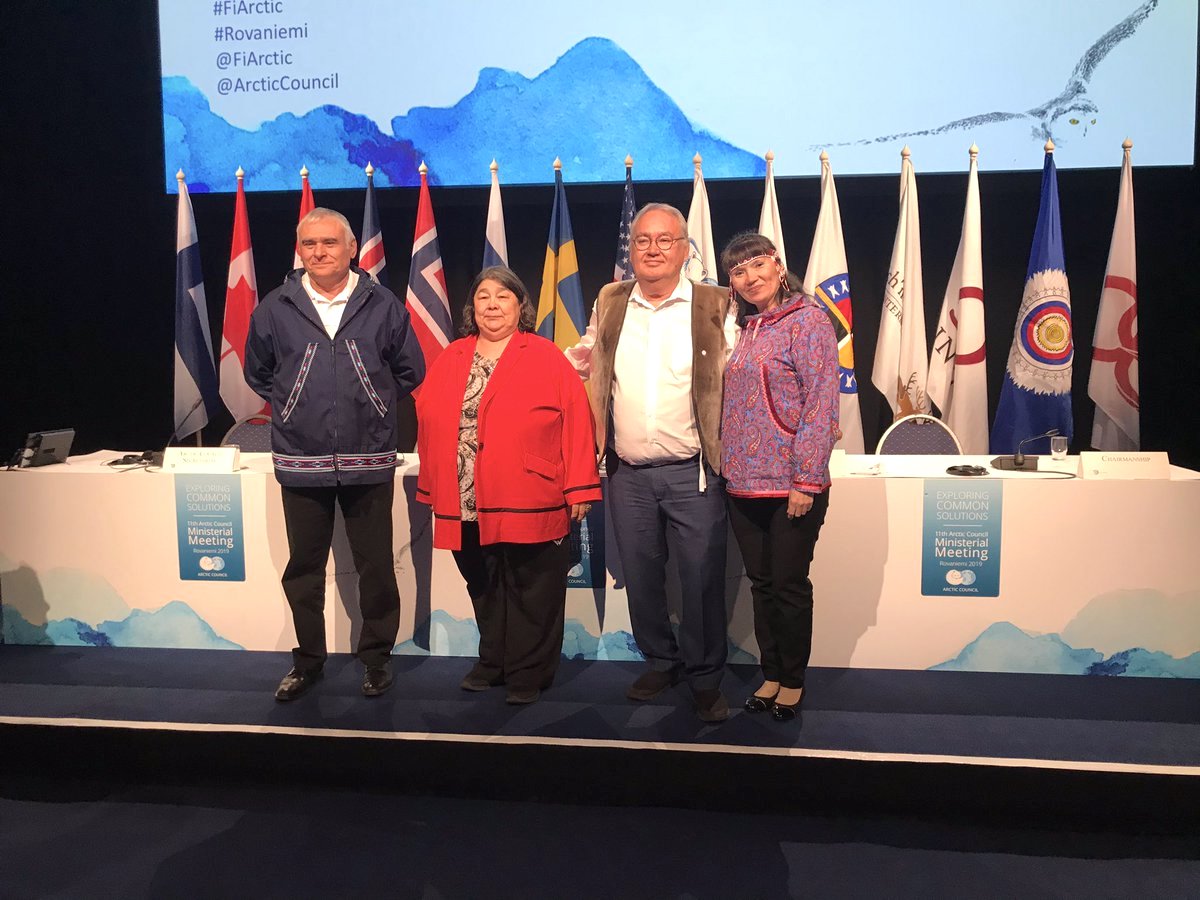 The presidents of the Inuit Circumpolar Council stand in front of the flags of the Arctic Council’s member nations in the meeting room of the Arctic Council ministerial. Jimmy Stotts, the president of Inuit Circumpolar Council–Alaska, urged all nations during the ministerial to recognize that climate change is affecting the Arctic and take action. From left: Stotts, Monica Ell-Kanayuk of ICC-Canada, Hjalmar Dahl of ICC-Greenland and Liubov Taian of ICC-Chukotka. (Photo courtesy of ICC-Canada)

Like a firecracker that produces a disappointing thud instead of a bright burst, the Arctic Council’s ministerial meeting in Rovaniemi, Finland ended today without the usual signing fanfare around a big, joint declaration by the eight circumpolar states.

Instead, due to a lack of consensus about what to say on climate change, Finland’s foreign minister, Timo Soini, issued a detailed chair’s statement—the first such document in the Arctic Council’s history.

In it, Soini refers to “a majority of us” around the Arctic Council table, who supported clauses and issues involving climate change, such as the need to reduce greenhouse gas and black carbon emissions and to work on climate change adaptation.

Mike Pompeo, the United States secretary of state, had previously explained his lack of support for any mention of climate change by saying the Trump administration shares “a deep commitment to environmental stewardship,” but wouldn’t sign on to collective goals like those on black carbon emissions, which accelerate warming in the Arctic.

During a news conference, broadcast online after the ministerial, Soini said it wasn’t possible to get a joint declaration, even after a night spent in negotiation, so he ended up crafting a one-page ministerial statement that everyone did sign.

“As a creative person, I did two, to show that eight foreign ministers can agree on some core issues, which are now in this one-pager,” Soini said, referring to the slim joint ministerial statement that the eight ministers signed.

Not all disagreements can be solved in one ministerial, said Soini, adding that the result could have been “much more worse.”

Despite the lack of the usual declaration, the ministerial table still provided Indigenous participants and the other Arctic Council member states, like Canada, which support climate change action, a place to speak out. 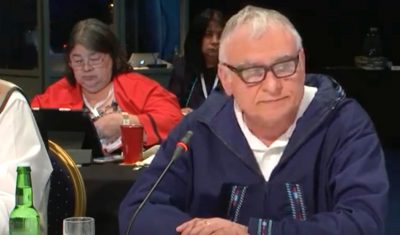 At the Arctic Council ministerial, Jimmy Stotts, the president of ICC-Alaska, says, on the issue of climate change, “we believe it’s time to stop bickering to survive.” (Screen shot)

In a jab at the U.S., Jimmy Stotts, the president of Inuit Circumpolar Council–Alaska, said it’s time to stop “hiding from reality” and acknowledge that climate change is real, and that mankind is responsible for much of it.

“We don’t understand those who would argue otherwise,” Stotts said. “We believe it’s time to stop bickering to survive.”

Stotts also suggested a greater focus by the Arctic Council on other key issues for Arctic Indigenous peoples, such as wildlife management, food security, infrastructure deficits, environmental issues and “the horror of suicide.”

He urged the Arctic Council to get back to its original idea, that of finding a balance between development and conservation.

Climate change and the important role of Indigenous peoples in the Arctic Council was also the main focus of an address to ministerial by Canadian Foreign Minister Chrystia Freeland.

“We must all continue to draw on the collective wisdom of the Indigenous organizations,” Freeland said.

She referred to the federal government’s recent “terrifying” report on climate change that could see temperatures in the Arctic rise by 11 degrees.

Freeland said Canada plans to earmark more than $28 million to—among other things— support an Arctic Council sustainable development working group secretariat, to provide continued assistance or Indigenous groups so they can participate in the Arctic Council and to help UArctic, a university network with members around the circumpolar world.

The chairmanship of the Arctic Council now goes to Iceland for the next two years. 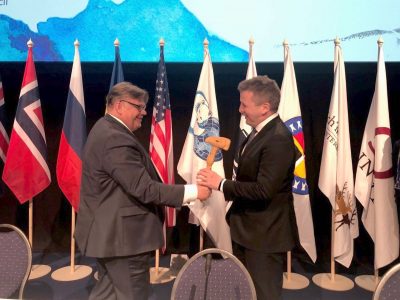 “Active dialogue based on scientific research and dynamic collaboration between our countries and organizations is the best way forward for the Arctic Council,” said Guðlaugur Þór Þórðarson before receiving the chairmanship gavel from Finland’s Timo Soini during the Arctic Ministerial 2019. (Photo courtesy of Iceland’s foreign affairs ministry/Twitter)

The incoming Icelandic chair said in a news release that it will continue supporting many ongoing activities of the Arctic Council’s working groups and other subsidiary bodies, as well as introducing a number of new projects.

With sustainable development as an overarching theme, Iceland plans to highlight four priorities: The Arctic marine environment, climate and green energy solutions, people and communities of the Arctic, and a stronger Arctic Council.

“Arctic affairs are a top priority in Iceland’s foreign policy and chairing the Arctic Council brings a unique and much welcomed opportunity for Iceland to lead the collaboration between the member states, the permanent participants and the observers within the Council,” Iceland’s Foreign Minister Guðlaugur Þór Þórðarson stated.