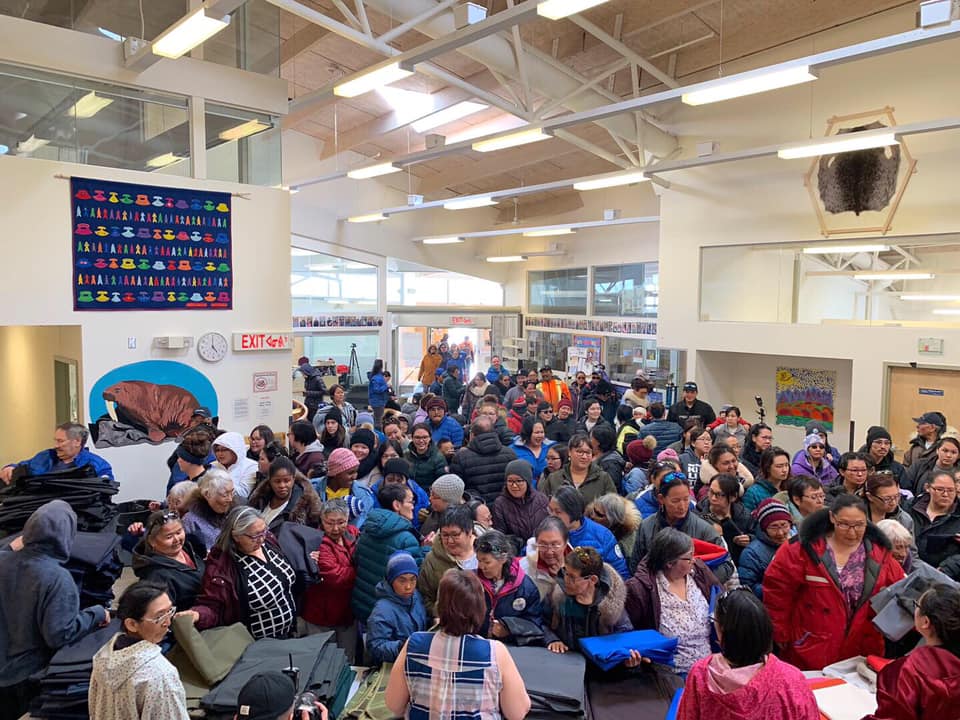 Scores of Cambridge Bay women fill the western Nunavut community’s high school in July 2019, when the parka-making company Canada Goose handed out hundreds of metres of fabric. Now, that program has been expanded—and the company, backed by actor Ryan Reynolds, is sending parkas and footwear to Arctic Bay. (Photo courtesy of Pitquhirnikkut Ilihautiniq)

The parka-making company Canada Goose and Hollywood actor and film producer Ryan Reynolds have teamed up to bring warmth to a Nunavut community.

Canada Goose and Reynolds, who was born and raised in British Columbia, have donated more than 300 Canada Goose parkas and Baffin footwear to the students of Inuujaq School in Arctic Bay.

“It came to my attention students at Inuujaq School in Arctic Bay were going without adequate winter clothing. Of course, it highlights a larger issue of basic needs going unmet in Canada’s northern communities,” Reynolds said in a Canada Goose news release on Tuesday, Oct. 6.

“I reached out to Canada Goose to match me in providing these students with essential winter gear. They not only said yes in less than 30 seconds, but also went so far above and beyond matching me. I’m deeply inspired and grateful.”

“This has been accentuated by the impact of COVID-19,” Durrant said in the release. “We are so appreciative of the warmth Ryan and Canada Goose have shown our students, their gift will be remembered for years to come.”

The roughly 300 students who attend Inuujaq School are expected to receive the gear before winter sets in.

As the weather became colder last month in Arctic Bay, Nunavut singer and songwriter Becky Han called out on social media for donations of warm winter clothing for children in her hometown of Arctic Bay. On Oct. 6, she thanked Canada Goose and Reynolds on Twitter.

ᖁᔭᓐᓇᒦᒃ/thank you @VancityReynolds & @canadagoose for sending 300 warm parkas to Arctic Bay’s Inuujaq School. I am at a loss for words for all the help and love so many humans have shown my home town. This has been incredible. #inuujaqschool https://t.co/UC5KuXPKYr

Inuit Tapiriit Kanatami President Natan Obed said in the release “this contribution will help ensure that families have what they need to celebrate our winter weather with gear that is appropriate to our climate and supportive of our way of life.

“Inuit have survived since time immemorial crafting clothing from materials found in our environment. But we know that not all families have access to handmade or traditionally made parkas. This initiative will support those in our communities who need it most.”

Canada Goose is also expanding its Resource Centre Program, in partnership with ITK.

The program has already donated over one million metres of fabric and material to communities in the North for parka making.

It will now also include donations of repurposed parkas, many from Canada Goose’s warranty program, the company said in its Oct. 6 news release.

These refurbished parkas will deliver warmth to communities in all four regions of Inuit Nunangat and reflect the company’s sustainable impact strategy.

“We are committed to keeping the earth cold and the people on it warm—and with today’s announcement, we’re delivering on both of those commitments,” said Dani Reiss, the president and CEO of Canada Goose, in the release.

“I’m proud that we, along with Ryan, are able to deliver warmth to the students of Inuujaq School in Arctic Bay. And now, through our expanded Resource Centre Program, we will bring the warmth of Canada Goose to even more communities across the Arctic.”