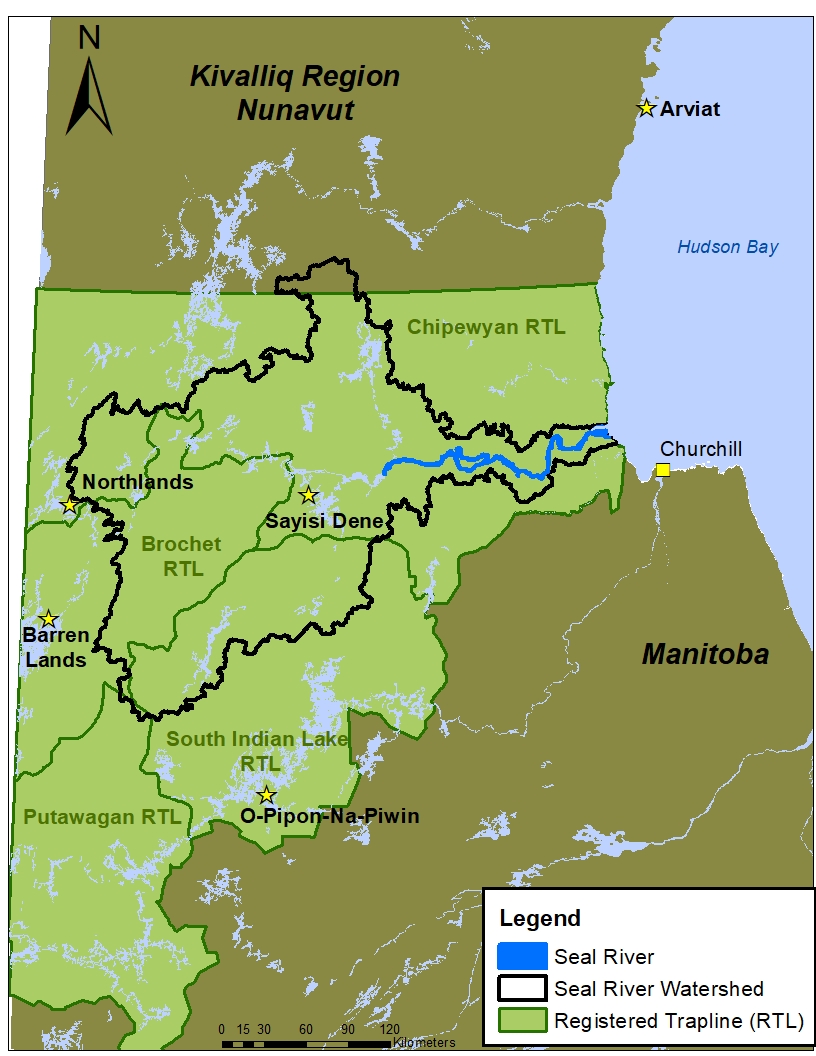 Here’s the location of the Seal River watershed, which will likely become an Indigenous Protected Area. (Seal River Watershed Alliance)

“Our ancestors have always wanted to respect the wildlife”

A large piece of territory in northern Manitoba just south of Arviat is moving closer to becoming an Indigenous Protected Area, following an announcement on Aug. 25 from Environment and Climate Change Minister Jonathan Wilkinson.

The area, called the Seal River watershed, covers about 50,000 square kilometres, which makes it almost as big as Nova Scotia.

At its heart is the 260-kilometre-long Seal River, which flows into Hudson Bay north of Churchill and south of Arviat. Abundant quantities of harbour seals thrive as far as 200 kilometres up river.

Wilkinson, who announced a $3.2-million contribution to the Seal River Watershed Alliance, which is working on the project, said the protected area, when finalized, would help the Liberal government move toward its goal of creating protected areas within one-quarter of Canada’s lands and offshore areas over the next five years.

“By working with partners, on projects such as this one, we are making progress in protecting and enhancing biodiversity by conserving a quarter of Canada’s land and a quarter of its oceans by 2025,” Wilkinson said in a news release.

The project leader is Ernie Bussidor, from the Sayisi Dene community of Tadoule Lake.

The proposed protected area sits within land that’s an adhesion to Treaty No. 5, but three other Dene and Cree First Nations communities, along with the Inuit community of Arviat, have an interest in the project.

“Our ancestors have always wanted to respect the wildlife, namely the caribou, as it is their main diet, thus the Inuit elders are continuing to protect the wintering and calving grounds of Beverly and Qamanirjuaq caribou herds over the past centuries and will continue for the next future generations,” Thomasie Alikaswa, the chairperson of the Arviat Hunters and Trappers Organization, said last November in a letter of support.

The Beverly and Qamanirjuaq Caribou Management Board also supports the project.

An Indigenous Protected Area is a special conservation zone in which Indigenous governments play a primary role in managing the area, Environment and Climate Change Canada says on its website.

To help pay for the establishment of Indigenous Protected Areas across Canada, the federal government created a $500-million fund in 2018 called the Canada Nature Fund.