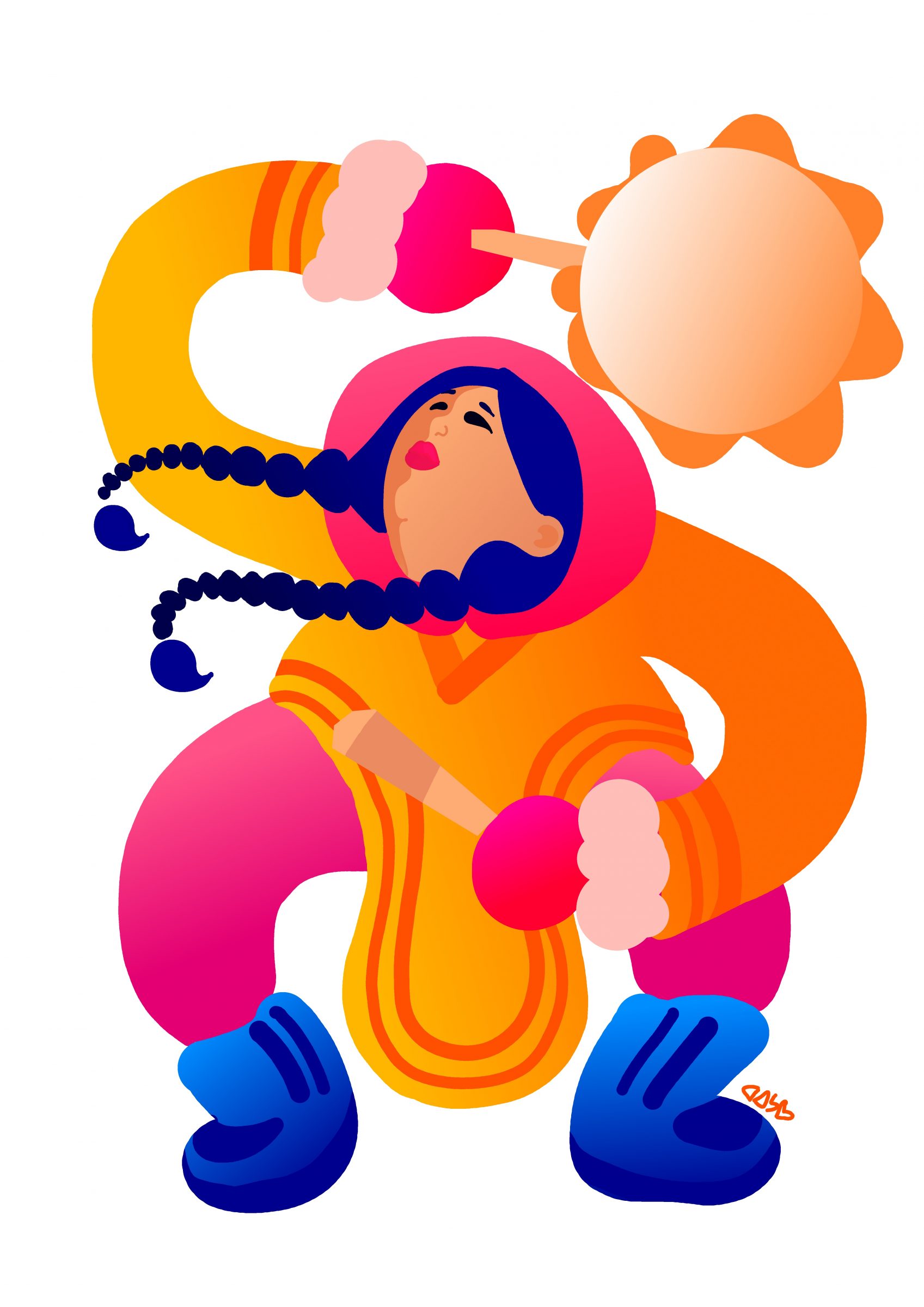 Aija Komangapik, who is the daughter of Nunavut sculptor Ruben Komangapik, has won first prize for her digital artwork “Drumdancer” in this year’s Indigenous Arts & Stories contest.

Komangapik won in the senior art category, for contestants aged 19-29.

Komangapik’s vividly coloured “Drumdancer” was praised by contest juror Ryan Rice for how it expresses the fluidity of the dancer’s movement.

“The glowing dancer flows fluidly without constraint to the beat of the drum, emitting a freedom cultural continuity and resiliency provides.”

Nunatsiaq News asked Komangapik by email to explain how Drumdancer was created and what the story is behind it.

Komangapik replied “My piece is a digital art drawing, so it’s more of a modern medium, which I like since I can quickly correct mistakes.

“As for story, I just wanted to capture the feeling I get when I watch the drum dancers in my life move; like my sister.

“When they dance, their movements are vibrant and their bodies move as if they have no joints, so my drum dancer looks more rubbery than realistic.”

She added that “the name though was just because I was feeling uncreative at the time!”

When asked how she had started to explore visual art, Komangapik said, “My father is an artist, and my mother used to do some artistic things when I was a kid, so I guess it was just around me since I was very small.”

She explained that she was born and raised in Iqaluit, but “in my early teens I moved with one of my sisters to the Gaspé Coast in Quebec to live with my Ataata and his then-wife.”

Komangapik said that she was quite surprised to have won first place in the contest.

“I do love to draw and I love visual media in general, but I just wasn’t expecting my work to get that far. For that I guess I am a bit proud that other people like my work.”

When asked what other art projects she was working on, if any, Komangapik said she was quite busy with preparing for her education, “so no projects yet but I do hope to do more art-related things in the future.”

Komangapik is going to study biochemistry at Bishop’s University in Sherbrooke this fall.

The organizers of this year’s contest said in a news release issued on June 17 that they received more than 950 submissions, “making it the toughest competition in the program’s 15-year history.”

Indigenous Arts & Stories invites First Nations, Métis and Inuit artists (ages 6-29) to interpret an aspect of their culture and heritage through literary and visual arts for a chance to earn prizes and national recognition.