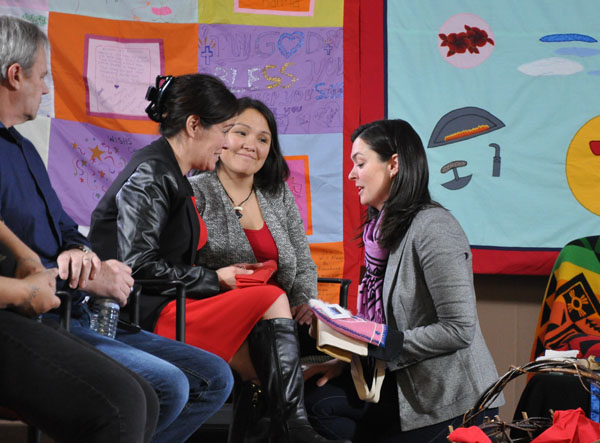 MMIWG commissioner Qajaq Robinson, right, presents an eagle feather to Laura Mackenzie after she testified before the commission Feb. 20 in Rankin Inlet. (PHOTO BY SARAH ROGERS)

The National Inquiry into Missing and Murdered Indigenous Women and Girls has made a formal request to Ottawa to extend its mandate until the end of 2020.

The federal commission looking at the root causes of violence against First Nations, Métis and Inuit women and girls is already three-quarters into its current two-year mandate, though commissioners only just began hosting community hearings last fall.

“All commissioners are in strong agreement that a two-year extension is required to fulfil our mandate,” said Chief Commissioner Marion Buller at a news conference on Tuesday, March 6.

“We want Canada to understand the breadth and depth of this national tragedy.”

Since the inquiry launched in late 2016, commissioners say they’ve heard from more than 760 witnesses during 134 public hearings, including community hearings in Rankin Inlet last month—the commission’s first in Inuit Nunangat.

Another 630 individuals have registered with the inquiry to testify in the coming months.

“We want to hear their stories and their recommendations,” Buller said.

Buller noted that all commissioners have always planned their work within the inquiry’s existing timeline, which would wrap up this fall.

With an extension until December 2020, however, the inquiry would have a chance to visit more of Canada’s Indigenous regions and communities, as well as do more in-depth work with women who are incarcerated, homeless and trafficked.

The inquiry also hopes to commission original research where it’s needed, on issues like the criminal justice system and systems of colonial violence.

The federal government initially funded the two-year inquiry at $54 million; commissioners haven’t said how much a two-year extension could cost.

Though commissioners have expressed the need for an extension for several months now, Buller said it took commissioners months to prepare a detailed, formal request, which is now in the hands of Carolyn Bennett, minister of Crown-Indigenous relations and northern affairs.

“In the coming weeks, I will be discussing this request with families, Indigenous partners, provincial and territorial counterparts and my cabinet colleagues,” Bennett said in a March 6 statement.

“Our government is committed to ending the ongoing national tragedy of missing and murdered Indigenous women and girls.”

During the news conference, Buller acknowledged the many stumbling blocks she and her three fellow commissioners have faced, from glitches with office infrastructure to a number of staff resignations.

“The national inquiry has experienced some setbacks… but we’ve been able to make significantly progress on shedding some light on MMIWG,” Buller said. “These stories are being heard by Canadians for the first time.

“We strongly believe the majority of Canadians support the continuation of our work.”

Many Nunavummiut have now seen the inquiry in action, since the commission held its first hearings in Rankin Inlet next month.

A number of Inuit families from Nunavik are now scheduled to testify at the inquiry’s upcoming hearings in Montreal, March 12 to March 16.

The inquiry is hosting hearings this week in Happy Valley-Goose Bay, Labrador. You can watch the hearings live from the commission’s Facebook page.