“The current system is highly punitive” 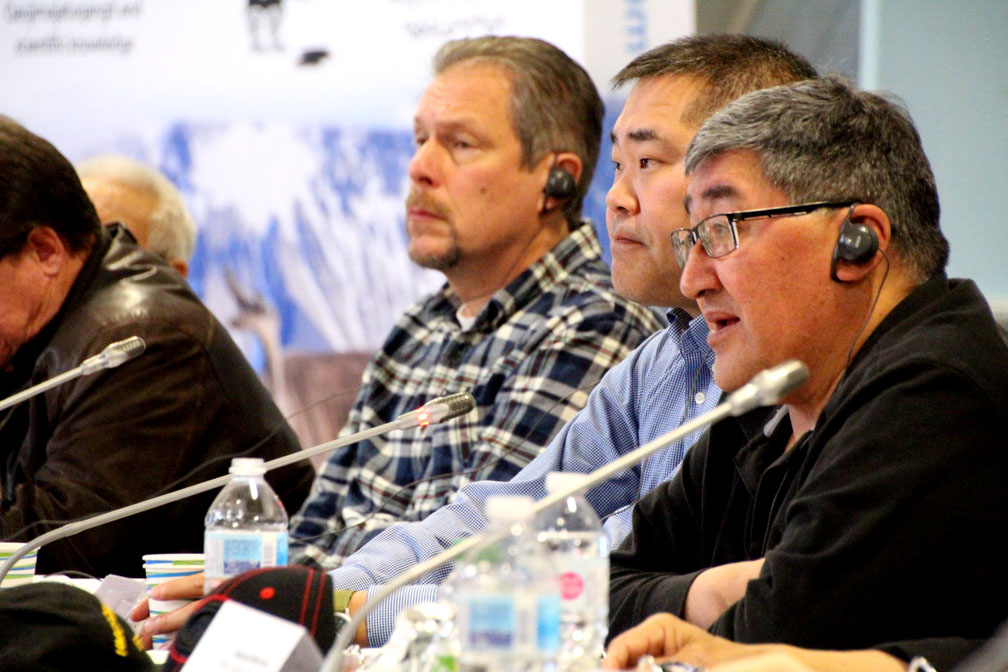 Public safety should be a top priority in the management of polar bears in Nunavut, Paul Irngaut, the director of wildlife and environment at Nunavut Tunngavik Inc., said this week at a public hearing in Iqaluit held by the Nunavut Wildlife Management Board. (PHOTO BY BETH BROWN) 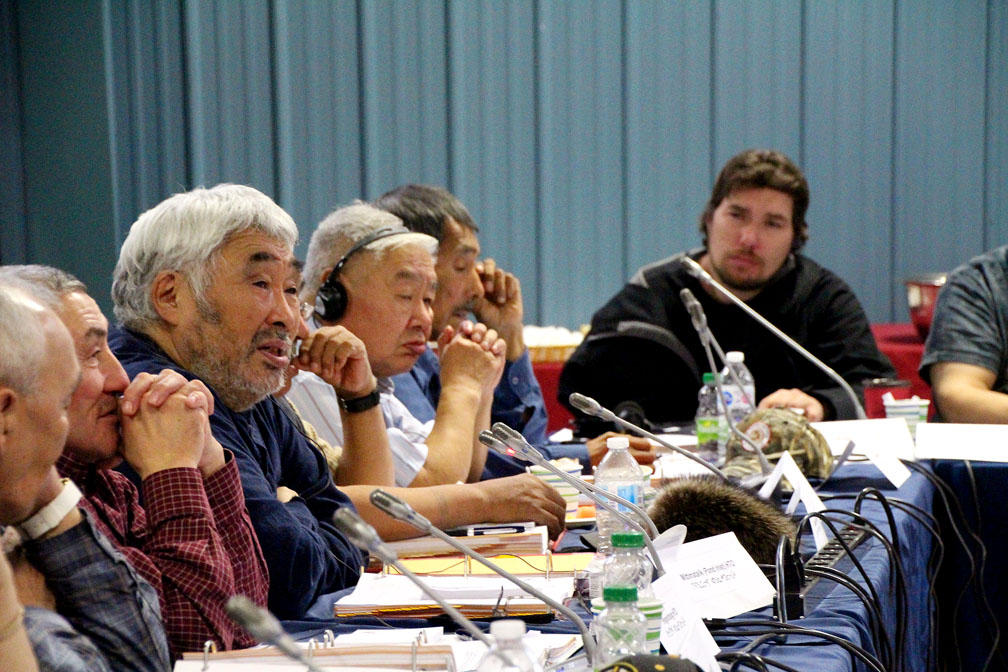 When Inuit kill polar bears in self-defence, those kills should not be subtracted from community harvesting quotas, the Pond Inlet HTO representative, Charlie Inuaraq (navy blue shirt, on the left,) said at a public hearing hosted by the Nunavut Wildlife Management Board in Iqaluit this week. (PHOTO BY BETH BROWN)

Inuit in Nunavut communities want to kill polar bears in self-defence, without having those kills subtracted from their annual allotted number of hunting tags.

“Do you have any plans to make sure emergency and defence kills are removed from quotas?” the Pond Inlet Hunters and Trappers Organization’s representative, Charlie Inuaraq, asked on Wednesday, Nov. 14, at this week’s Nunavut Wildlife Management Board public hearing in Iqaluit.

His question came after Nunavut Tunngavik Inc. made a submission to the wildlife board on the Government of Nunavut’s draft plan for polar bear management.

Yesterday, GN officials said their plan doesn’t deal with defence kills and how they affect quotas.

For management purposes, there are 19 subpopulations of polar bears across the circumpolar world. Of those, 12 subpopulations are located mostly in Nunavut, though some overlap with other jurisdictions.

But the GN isn’t prepared to change quotas right now for each of those 12 polar bear subpopulations—and defence kills fall under annual quotas.

The GN plan does acknowledge that defence kills are becoming more common.

“In Nunavut, human safety and the right of Inuit to harvest are high priorities. Increased interactions between humans and bears, and a right to protect human safety and property, have led to an increase in defence kills,” the plan said.

“Considering all removals come off the [TAH] this can lead to a reduction in the community harvest, resulting in a loss of opportunity for traditional harvesting activities.”

This summer, two men in Nunavut—one from Arviat and one from Naujaat—died after they were mauled by polar bears.

The first was berry-picking with his children, while the second was hunting with two other men, who were also injured in the attack.

“We too are concerned about the decrease of polar bears. That’s the Inuit way,” said Paul Irngaut, NTI’s director of wildlife and environment.

But safety needs to come first, he said.

“When they [polar bears] come to the communities, they present a hazard to the public,” Irngaut said.

At their last annual general meeting, NTI delegates passed a resolution calling on the Government of Nunavut to “to take all available measures to address the risks of dangerous polar bear encounters in Nunavut communities.”

One delegate said, on Nov. 13, that because defence kills are taken from quotas, communities might feel pressure not to kill a bear posing a risk to the public.

“The over-harvest of a few females can result in the significant reduction of the quota of the next year.”

He called polar bear management in Nunavut “robust,” and said wildlife conservation is a tradition for Inuit.

NTI wants the GN to create a plan that is “acceptable and fair” in the eyes of Nunavut communities, he said.

Nunavut’s current polar bear management model has been in place since before Nunavut was created, and doesn’t incorporate Inuit knowledge.

For its part, the GN is promoting its new draft plan, which would guide polar bear management in Nunavut until 2026, as a document that puts Inuit knowledge first.

But Lee said he’s concerned that Inuit Qaujimaqatuqangit isn’t incorporated into the section of the draft plan on risk management.

IQ could help researchers understand how the hunting of male bears over female bears affects what Lee called “density dependence,” a process where population growth is affected by factors like competition and food sources.

More than one delegate asked if the GN would compensate families who suffered the loss of a loved one due to polar bear attack.

The short answer is no.

The government does not accept liability for polar bear—related deaths, but the GN can help reduce contacts between bears and humans, said Drikus Gissing, director of wildlife management for the Department of Environment.

And there’s a government program to compensate residents for property damaged by polar bears, Gissing said.

Charlie Inuaraq called on NTI and the GN to promote Inuit knowledge of polar bear management, saying news reports should include the perspectives of Inuit as well as scientists.

“Put the news out about what we do,” he said. “It’s misleading.”

He called it “bothersome” to have researchers come into his community for short periods of time, and then dictate to residents how many bears can be hunted.

“They take their research over our traditional knowledge,” he said.

“It’s what I eat and what I use for clothing,” he said.

“But we pay respect to the animals,” he said. “The polar bear is an intelligent, complicated, thinking species.”