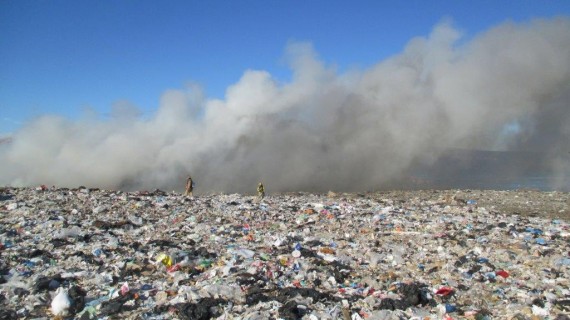 Iqaluit’s firefighters spent nine hours dousing a dump fire on the evening of July 11. Fire Chief Luc Grandmaison said he had feared at one point the fire would become another dumpcano—the landfill fire that blazed all summer in 2014. (PHOTO COURTESY OF THE IQALUIT FIRE DEPARTMENT)

Black smoke filled the air ahead of Fire Chief Luc Grandmaison July 11 as he and his crew prepared to hose down the latest fire at Iqaluit’s landfill.

Then the explosions began. There were three loud booms, heard about 30 metres from the fire, occurring between him and another firefighter. It sounded like bombs.

Tires were strewn with the trash beneath Grandmaison’s feet, and buried in the heap likely lay aerosols, propane tanks and other items waiting to blow up.

The fire was about 100 metres by 20 metres—about the length of a football field. But Grandmaison knew if he and his crew weren’t able to get it under control soon, it could become much larger.

At one point during the nine-hour battle to douse the fire, he worried he had another dumpcano in the making.

“One hour into trying to put out the fire and I was talking to the guy in charge of public works and I said, ‘We are losing this, we are losing this’,” Grandmaison said in an interview at his office on Wednesday, July 25. “This is how hard that fire was for us.”

“Do I deliver water to the citizens, or keep fighting a garbage fire? That is the decisions I have to make,” he said. “Do I let this go so people can have potable water tomorrow? This is what is going on in our heads.”

Grandmaison credited the city’s water delivery trucks, which brought water to the scene, for helping to stop the fire from becoming another dumpcano—the Iqaluit dump fire that blazed through the summer of 2014.

“I believe that this one was the greatest one that posed the biggest risk since then,” Grandmaison said.

If the water trucks had not driven well over the speed limit in the community during their many trips, and if the RCMP had not started escorting them to allow the trucks the right of way in traffic, firefighters would have lost control of the fire, Grandmaison said.

The dangerous materials in the landfill, meanwhile, put firefighters’ lives at risk, he said.

Following the last dump fire, on July 17, the city tightened up its inspections of waste entering the landfill, to help segregate dangerous items. Although the city introduced a sorting system for garbage back in 2014 after the dumpcano, it has not been enforced consistently. As a result, the landfill contains aerosols, batteries, propane tanks, tires and other fire risks.

On July 20, the city announced a funding agreement with the federal agreement to build a new landfill and decommission the old site, at a cost of $35 million, by 2020.

Until then, the existing landfill, which contains 20 years of garbage, will pose many safety hazards to those who venture inside it, said Grandmaison.

“This is a biohazard area,” Grandmaison said of the landfill. Beyond toxic fumes, which firefighters are protected from with breathing masks, they must also stand atop dirty diapers and the sludge from the sewage treatment plant that’s spread out at the dump.

But the city deserves credit for the new measures to properly segregate waste, said Grandmaison.

“I am glad the city took on some responsibility to reduce the risk.”