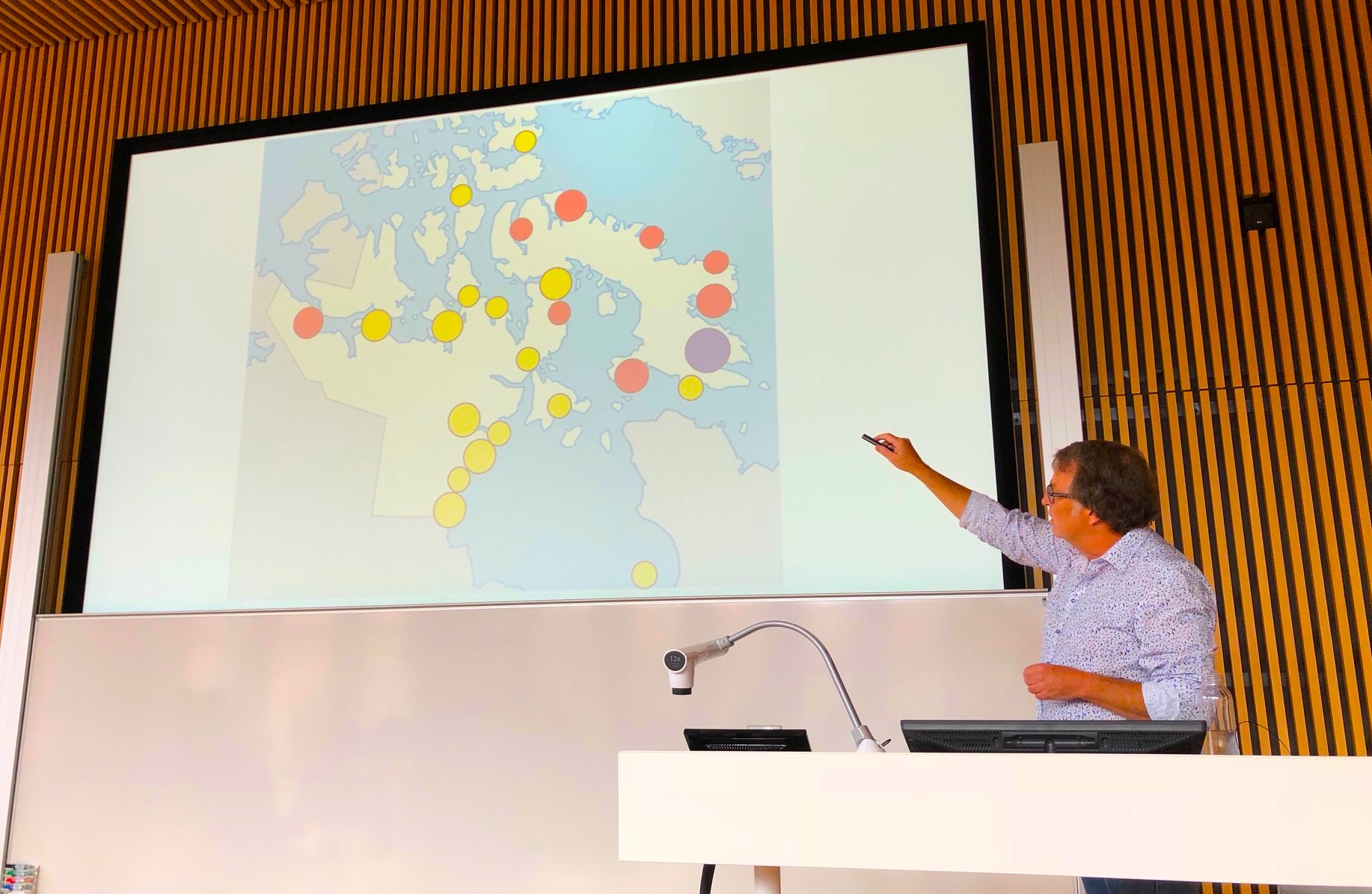 Researcher Jack Hicks points at a map of Nunavut where red dots show the communities where suicides have been more numerous. Hicks presented a new suicide prevention project at the International Congress of Circumpolar Health on Aug. 14 in Copenhagen. (PHOTO BY JANE GEORGE)

The project will focus on people who have been seen in a medical facility for a suicide attempt, said Jack Hicks, a former Nunavut resident, statistician and suicide researcher, who is now an adjunct professor at the University of Saskatchewan’s medical school.

Hicks spoke on Tuesday at a session at the International Congress on Circumpolar Health in Copenhagen.

“In Nunavut, like elsewhere, people who attempt suicide are at greater risk of repeated attempts, and of dying by suicide,” Hicks said.

So the hope is that the project’s intervention can make a big difference in Nunavut, where officials have declared suicide a public emergency.

Hicks and the project’s principal investigator, Brian Mishara, director of the Centre for Research and Intervention on Suicide, Ethical Issues and End-of-Life Practices at the Université du Québec à Montréal, and Allison Crawford, medical director of the University of Toronto’s Northern Psychiatry Outreach Program and Telepsychiatry, say similar programs have worked elsewhere and they believe these can be adapted and successfully implemented in the Qikiqtani region of Nunavut.

They want to see if the Baffin-based project will produce the same beneficial effects.

It’s not the first time such a project has taken place. Under the World Health Organization there were similar projects in the early 2000s, with encouraging results.

Their partners in this project, funded by the Canadian Institutes of Health Research, as part of the Global Alliance for Chronic Diseases mental health initiative, include Nunavut’s Health Department and the Embrace Life Council.

The project’s intervention will include follow-up contacts with people who have attempted suicide, using local community resources over many months. These will be combined with access to existing mental health resources, in Iqaluit and Ottawa.

If the project works, it could significantly reduce rates of repeated suicide attempts among this high-risk population, Hicks said.

Suicide attempts in the region can number in the hundreds, he said.

A one-year pilot test of the project will lead to a 30-month “scaling up” of the project, which will then be followed by a six-month project evaluation.

That evaluation will look at whether those who have attempted suicide accept the program.

And it will look at the “ethical and practical issues” involved in providing community interventions to people at high risk of suicide, “in settings where mental health resources are limited,” Hicks said.

As part of the project, Hicks and the other researchers will also try to look at factors around community involvement in follow-up with persons who have attempted suicide and the role of stigma associated with mental health and suicide in Nunavut.

These are all issues on which action has been called for by members of the public.

At the circumpolar health conference in Copenhagen, Hicks, in another presentation, spoke about the risk factors that lead to elevated rates of child and youth suicide behaviour in some Indigenous communities and what these mean for suicide prevention strategies.

Research has shown that those who attempt suicide are more likely to have a personal history of neglect or abuse as a child, to have an anxiety disorder and to use cannabis.

But in Nunavut, Hicks said that the communities with the highest numbers of suicide deaths are those that suffered the impacts of colonialism.

“Beginning in the 1970s we begin to see a rise in the Inuit suicide rates, with many of those dying by suicide being quite young,” Hicks said. “A key factor in this intense and rapid epidemiological transition was intergenerational trauma resulting from colonial disruptions to Inuit life ways, especially after World War II.”

The “colonial disruptions to Inuit lifeways” led to elevated rates of suicidal behaviour—especially among children and youth in some communities, he suggested.

So, a “two-track approach” is required for suicide prevention strategies in Nunavut, he said.

He’d like to see the full range of suicide prevention measures undertaken in “best practice” jurisdictions, like Quebec, which has lowered its suicide rate, as well as measures to address early childhood adversity and the scars this leaves.

Hicks said there’s also an “urgent need” to get governments to buy into and actively implement the suicide prevention strategies that have been spearheaded by Inuit organizations.

That will take a “massive upstream investment” from the federal government to reduce risk factors in children’s lives early on, such as sexual abuse and neglect, that contribute later to suicide attempts, Hicks said.

If you’re in Nunavut or Nunavik and feel distressed or have had thoughts of suicide, there is help available. Call the Kamatsiaqtut Help Line to speak to someone in English or Inuktitut at 1-800-265-3333.