As COVID-19 cases rise, Arviat MLA presses premier on status of outside aid

“We are frustrated and we are fatigued. But we are still fighting,” John Main says 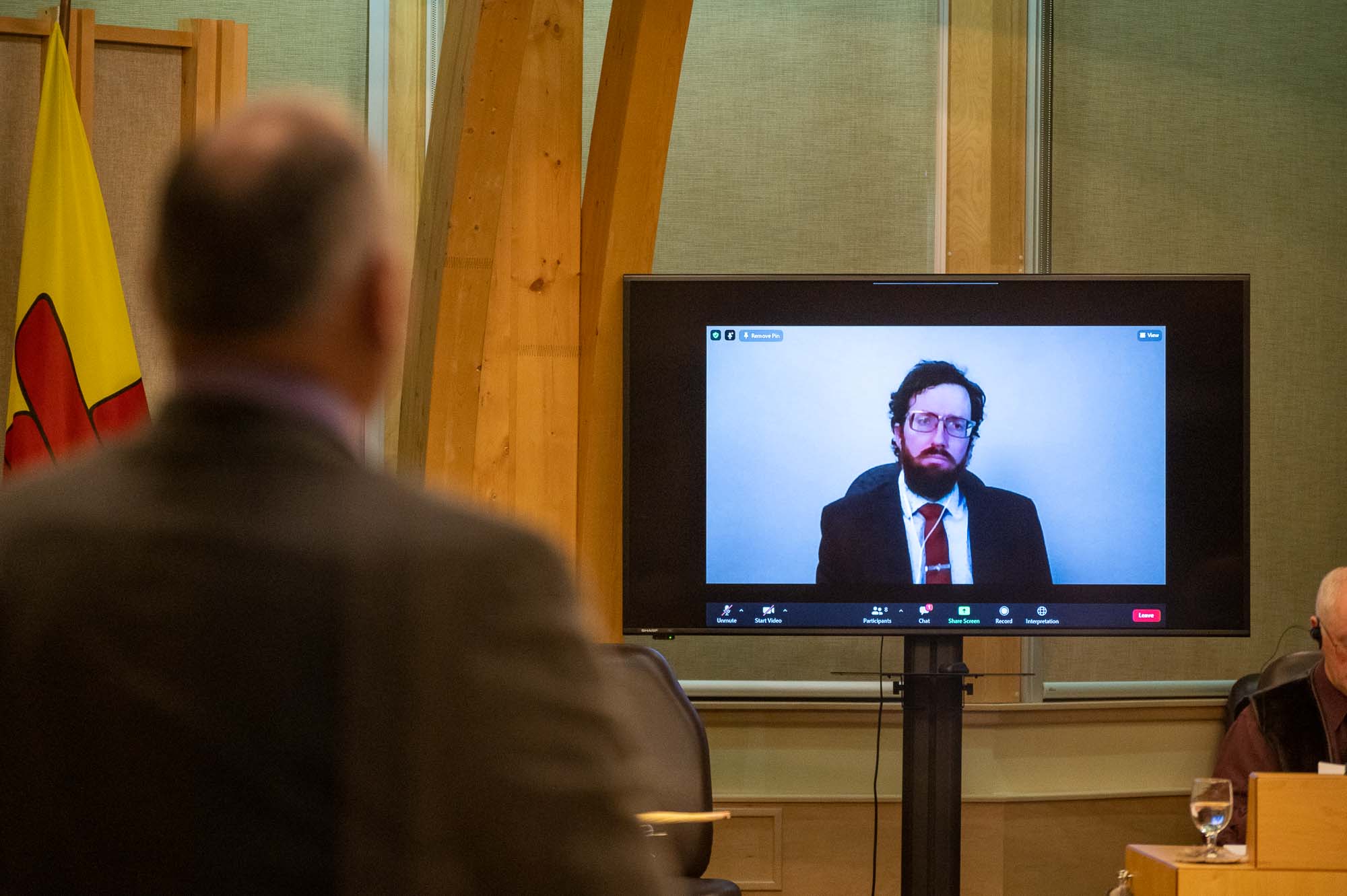 Premier Joe Savikataaq addresses John Main, MLA for Arviat North-Whale Cove, during question period on Feb. 22, the first day of the legislative assembly’s winter sitting. Main, forced to stay in Arviat due to travel restrictions will be participating in the 17-day sitting remotely. (Photo by Dustin Patar)

It has been more than 100 days since Arviat’s first case of COVID-19 and, despite a brief period in January with no known cases in the community, months living under lockdown have taken their toll, one of the area’s members of the legislative assembly says.

“We are frustrated and we are fatigued,” said John Main, MLA for Arviat North-Whale Cove, on the first day of the legislature’s winter sitting Monday.

“But, we are still fighting.”

His remarks, delivered via Zoom because of Arviat’s travel restrictions, came hours after the territorial government announced 12 more cases in the already-beleaguered Kivalliq community, bringing the total number of infections to 33.

While Main thanked the various levels of government, organizations, private companies and Nunavummiut who have helped his community, his questions to Premier Joe Savikataaq focused on who’s responsible for handling the COVID-19 outbreak. He questioned the premier about who has helped, and similarly, who hasn’t.

Savikataaq responded by saying that other than the actual health issues surrounding COVID-19, which are handled by the Department of Health, the Department of Executive and Intergovernmental Affairs has a secretariat that is responsible for the overall response to COVID-19 within the government, including business and communications issues.

He also added that the secretariat is responsible for securing funds from the federal government.

Following that, Main asked what resources the Government of Nunavut had accessed in regards to the outbreak in Arviat.

Savikataaq listed a number of groups in his response, including the Government of Canada, the Nunavut government, Nunavut Tunngavik Inc., the Kivalliq Inuit Association, Agnico Eagle, the Food Bank of Canada and the Canadian Red Cross. He said these groups had provided resources for things like food and on-the-land activities.

Savikataaq also took the time to thank the Hamlet of Arviat for its continued work in fighting the outbreak.

While Main also expressed his gratitude towards the hamlet and residents of Arviat for their continued work, he commented that something was lacking.

Main’s final question to Savikataaq was whether the Government of Nunavut will be requesting on-the-ground help from the federal government or Canadian armed forces.

Main pointed to a recent decision to send the armed forces to the Cross Lake First Nation in Manitoba this week. Almost 200 people are sick with COVID-19 in that community, according to media reports, and the armed forces are there to provide wellness checks and establish alternative options for people who need to isolate.

Savikataaq responded by saying the Canadian Red Cross provided medical aid to the community during the initial outbreak last fall, when cases topped 100.

“I wondered if the armed forces would go to Arviat,” he said about that time.

But, said Savikitaaq, that decision rests with the territory’s chief public health officer, Dr. Michael Patterson, and to date, he has not made such a request.

While Main had used up his allotment of questions following that response, he had indicated during his opening statements that he had many questions regarding the ongoing COVID-19 situation.

“I think it would help not just the people of Arviat, but everybody in Nunavut if we talk about COVID-19,” said Main.

The winter sitting of the legislature began on Feb. 22 and will continue until March 16.