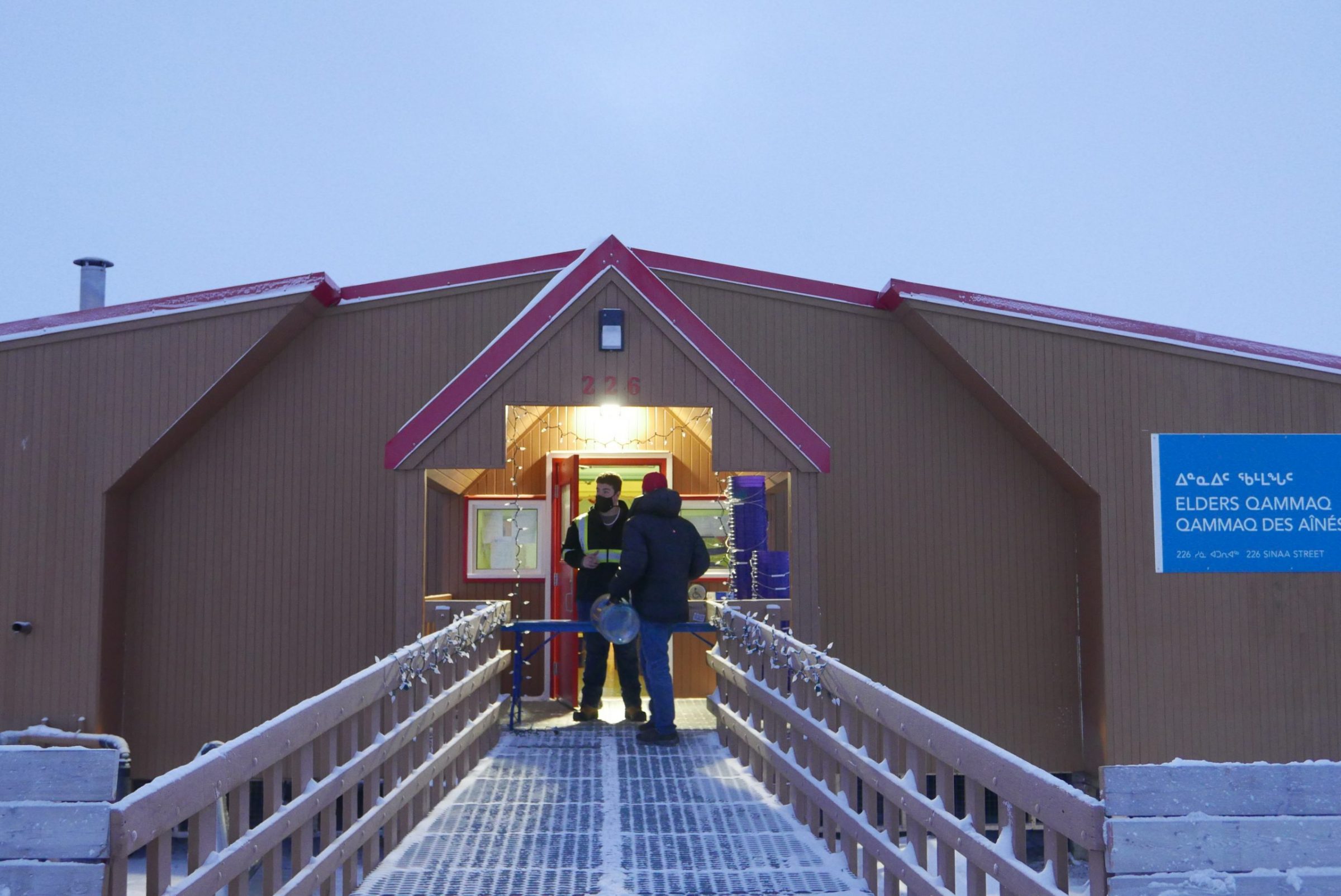 A City of Iqaluit employee and a resident meet at the door to the Elders Qammaq Monday afternoon to fill jugs with water from the Sylvia Grinnell River. (Photo by David Venn)

The City of Iqaluit is distributing water from Sylvia Grinnell River Monday in response to complaints that the smell of fuel has returned to the city’s treated water.

The water depot will be open from 3 to 8 p.m. at the Elders Qammaq, according to a news release issued by recreation director Stephanie Clark. The city is asking residents bring refillable containers, and to boil the water before drinking it or cooking with it.

Clark said, in an email, that the depot is starting later in the day to allow time for the trucks and pumps to warm up indoors.

The city is hoping to run the water depot for the week, Clark said, while staff continue to flush the water system.

Reports about a fuel smell in the water began to emerge on the evening of Jan. 13. The city confirmed later that day that trace amounts of fuel had entered the water distribution system on Monday and Wednesday.

The amounts were well below national healthy drinking water guidelines, according to news releases from the city and Nunavut Department of Health.

It’s been just over one month since Nunavut’s chief public health officer, Dr. Michael Patterson, lifted an advisory to not consume Iqaluit’s tap water. People first reported their water smelled of fuel on Oct. 2, and 10 days later the government told people to stop drinking it after the discovery of fuel contamination at Iqaluit’s water treatment plant.

On Jan. 6, the City of Iqaluit informed people that fuel made it into a treated water tank on Dec. 16, but this contamination didn’t make it into the city’s distribution system. This incident was blamed on maintenance at the plant.

The Government of Nunavut has not reinstated a do-not-consume water advisory, but a news release from the Department of Health over the weekend said the GN and city are both doing additional sampling of the water.

On Monday, the Government of Nunavut said in a statement that the Department of Health is working with the city to monitor water quality. “Currently there is no evidence that a do not consume order is necessary,” the statement said.