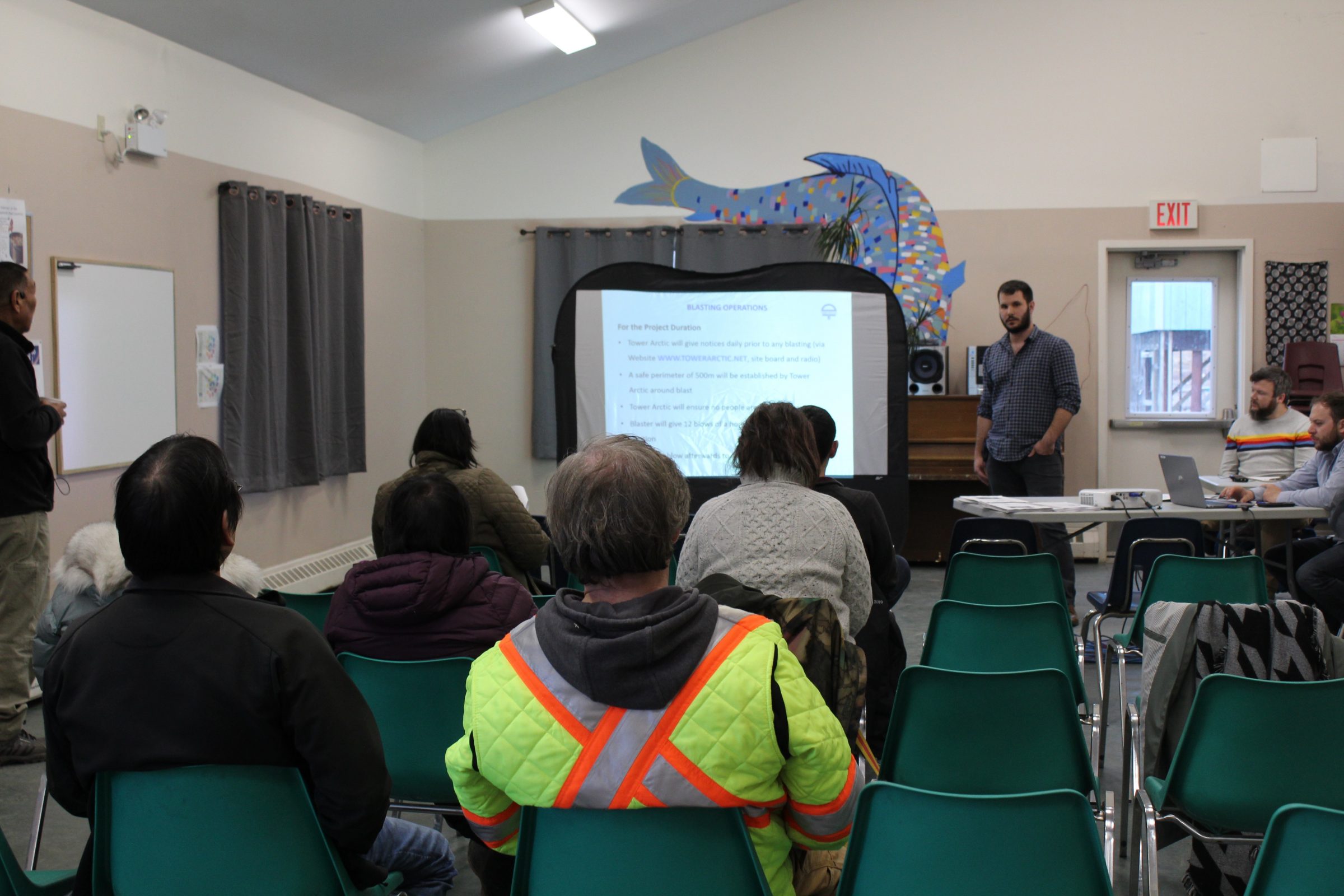 A public information session was held on Thursday, May 16, at Iqaluit’s Qajuqturvik Food Centre about the next steps of the construction of Iqaluit’s small-craft harbour and deepsea port. (Photo by Emma Tranter)

Construction on Iqaluit’s small-craft harbour and deepsea port is set to continue next month, and the company responsible is looking for local labour to help.

At a public information session on May 16, project managers at Tower Arctic presented an overview of the work completed so far and a timeline of next steps.

Since the last meeting in November 2018, Tower Arctic has installed three culverts and armour stones on the access road to the deepsea port and has winterized equipment and construction sites.

Starting in mid-June, drilling and blasting will recommence at the deepsea port, located at the southwestern tip of Koojesse Inlet. Crushing will also continue near the causeway. The blasting and crushing are scheduled to continue until November 2019.

Tower Arctic will give daily notices about blasting times on their website, it said. The blaster will sound a horn 12 times to notify people of the blast ignition, followed by a lengthy sounding of a horn to notify people that the blasting is over.

Tower Arctic said it will ensure no people are within the blasting zone, and a safe perimeter of 500 metres will be established around the site.

At 430 metres long, the deepsea port will allow all-tide access for ocean-going vessels. Fuel tankers will also be able to offload at the dock where there will be a new fuel line, along with the existing fuel line.

Dredging of the seabed at the deepsea port will start again in early July and is scheduled to wrap up in early August. The company will dredge 14,000 cubic metres of material this year.

As for the small-craft harbour, Tower Arctic says cleanup of the site has been completed along with the removal and relocation of shacks along the waterfront.

The construction activities on that specific project will include upgrading the parking and the ramp, and construction on the north breakwater.

The small-craft harbour will have limited access in July and August, according to Tower Arctic. The company recommends that people instead use the causeway for boat launching during those months.

Although the company said the causeway and small-craft harbour should remain open throughout construction, buoys with warning lights will be installed to indicate working zones to stay away from.

A safe corridor will be maintained from the public road to the boat launch of the small-craft harbour. Boaters can leave their boats in the safety of the harbour during storms but must inform a Tower Arctic representative if they do so, the company said.

The company also noted that an environmental specialist will be on site at all times to monitor the status of aquatic species and wildlife in the water during construction.

Some residents expressed concern about spills, especially after raw sewage flowed into Frobisher Bay for over a month earlier this year. Tower Arctic assured the audience on Thursday that the company has a spill management plan in place if anything were to happen.

Tower Arctic said this year’s work will continue until November. The next public information session on the project will be held in mid-June.

Resumes, comments or questions can be sent to info@towerarctic.net.

Tower won contracts from the Government of Nunavut in May 2018 to build a deepsea port and small craft harbour in Iqaluit. The GN has said it expects all work on the Iqaluit projects to be completed by 2021.