Documentary takes viewers on a paddling journey to Kangirsuk 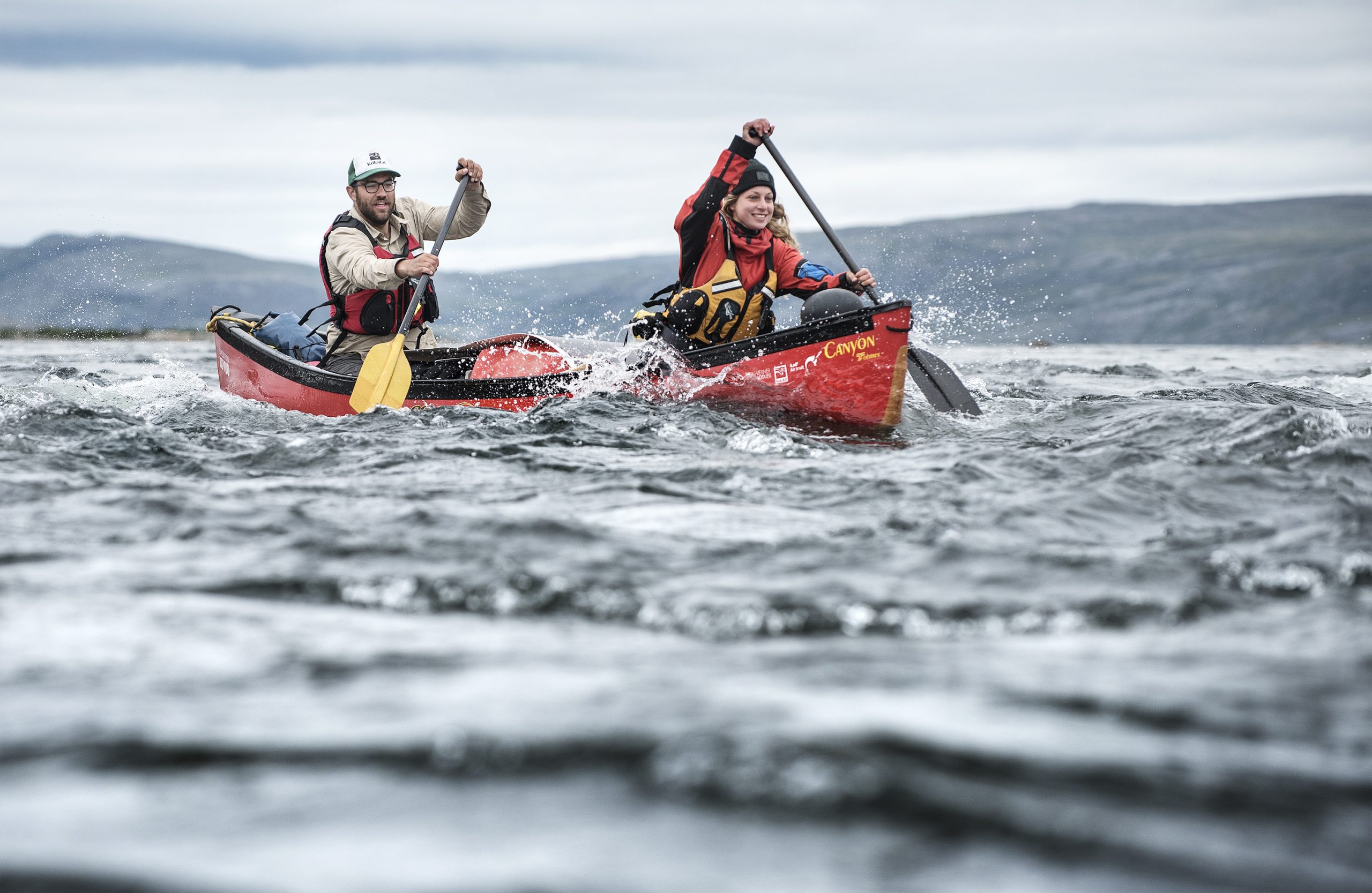 It begins, as documentaries do, with the unknown.

A clean slate. An open mind.

No inkling what’s to come.

Then two people in canoes appear on the water. Two more on land, a woman looking straight at the camera and a man, lying in the grass.

Eight kilometres walked over rocky terrain, 75 kilograms of gear loaded on each person. 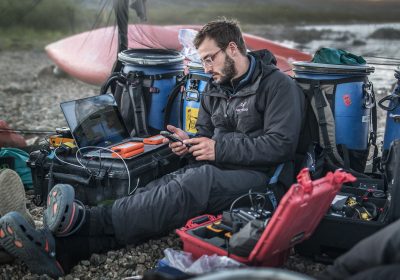 Léger-Savard’s (pictured) personal connection to Nunavik is why he felt compelled to explore the region. (Photo courtesy of François Léger-Savard)

Montreal filmmaker François Léger-Savard’s documentary, Following Lines, which is a winner at the 2022 Paddling Film Festival, follows six friends as they paddle 400 kilometres through Nunavik in the summer of 2017.

“There is always a moment when doubt sets in. Every challenge comes with its share of uncertainty,” Léger-Savard says in the film.

“What am I doing here in this precarious situation in the heart of this unpredictable territory? I often wonder, did my father ask the same questions? And what about my grandfather before him?”

Léger-Savard’s own story is tied to Nunavik: His grandfather was a surveyor, ​​spending 11 months in the North in 1926, mapping the land.

His father was an anthropologist who worked in the North as well, listening to and recording stories from Inuit and people in other northern communities.

A map of the roughly 400-kilometre journey, which began on July 12, 2017 in Pingaluit national park, and ended in Kangirsuk 26 days later on August 4, 2017. (Image courtesy of
François Léger-Savard)

This personal connection is why Léger-Savard felt compelled to explore the region and document his experience with it.

At the same time, he wanted to do something never done before — journey to the Lestage River, which has never been paddled and mapped, and bring back the first nautical layout for it.

That’s how the story begins.

The Lestage River runs from Pingualuit to Kangirsuk, and the goal is to reach Kangirsuk in 26 days. 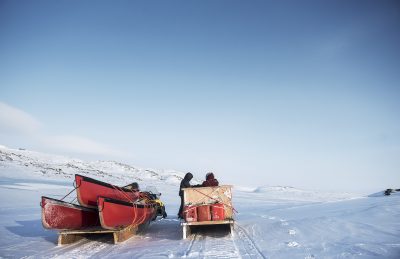 The group hop on their canoes at Pingualuit National Park, where they’d stored them in one of the park’s outbuildings during the previous winter. (Photo courtesy of François Léger-Savard)

On a personal level: fear, concern, and low morale.

Léger-Savard told Nunatsiaq News that looking back, he remembers the challenges clearly.

For example, the team was carrying equipment that could only be recharged using solar panels.

The first 10 to 15 days of the expedition were endless rain and grey skies. With no way to charge the equipment, all that could be done was to take things in stride.

“You have to adapt, you have to readjust,” Léger-Savard said of the experience.

At one point in the 40-minute documentary, the team realizes they won’t make it to Kangirsuk in time if they stay on the same route, so they change direction and travel toward the Payne River instead.

The Payne is about 40 kilometres upriver from the village of Kangirsuk, and the change means the team won’t achieve their goal of mapping the Lestage.

“Changing our mind, switching to the Payne, meets our true objectives,” team member Daigle says in the documentary. “‘Failure’ is too big a word. It doesn’t feel like that to me.” 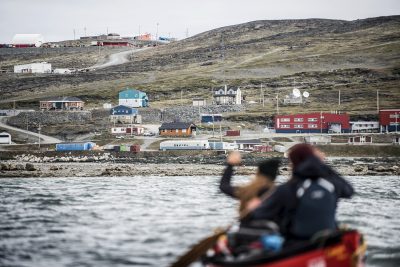 Léger-Savard remembers the challenges clearly. They taught him about life in the North. (Photo courtesy of François Léger-Savard) 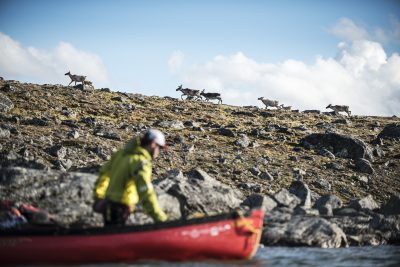 During the trip, the group stopped to explore the land, finding rocks that had been positioned by the Inuit for caribou travelling through the region. (Photo courtesy of François Léger-Savard) 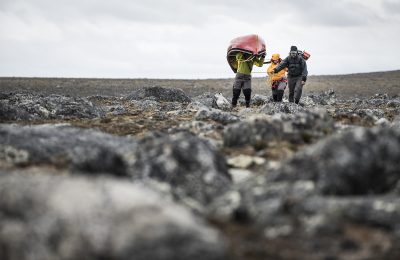 The idea for the expedition was to explore the Ungava Peninsula, the northernmost mainland of eastern North America, and reach Kangirsuk in 26 days. (Photo courtesy of François Léger-Savard) 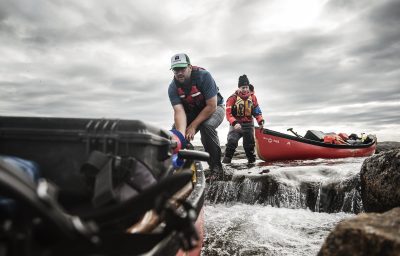 The group wanted to do something never done before — journey to the Lestage river, which has never been paddled and mapped, and bring back the first nautical layout for it. (Photo courtesy of François Léger-Savard)

As the team changes course, so does the documentary. The paddlers are no longer stressed; now they are taking their time and making the journey peacefully.

At one point, they stop to explore the land, finding rocks that had been positioned by the Inuit to track caribou travelling through the region.

It took Léger-Savard back to when they first started their journey in Pingaluit and how the Inuit helped them there.

“They shared their knowledge and they shared country food with us when we didn’t know what was in front of us,” he said.

The group experienced the same kinship when they reached Kangirsuk as well.

“We went to the grocery store and there was an elder in the line,” Léger-Savard recalled. “She said that she heard on the radio that we were coming from this trip, and remembered her father who travelled the land on the kayak.

“She was very touched and welcoming.”

As the documentary nears its end, Léger-Savard says, “Facing the unknown, one metre at a time, it is rare and precious to be moving among such barren lands.

“These stories — these meetings and the memory of them, the solitude and the doubts, and the new story we’ll fashion from them — all contribute to shaping the people we are becoming.”

It ends, as documentaries do, with a fade to black.