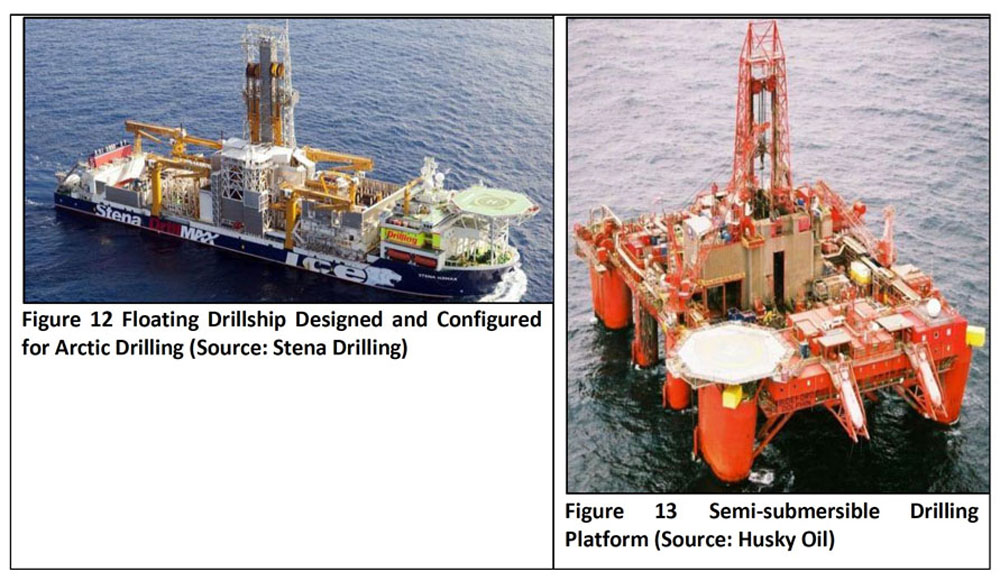 Here are two types of vessels that could be used for exploratory drilling for oil and gas in Baffin Bay and Davis Strait. The photo on the left shows a drill ship, and the photo on the right shows a semi-submersible drillling platform. (STENA DRILLING/HUSKY OIL)

The current moratorium, which Prime Minister Justin Trudeau announced in December 2016, is to be reviewed by 2021. The Clyde River group wants it continued for another five years.

“Our community needs jobs and we are not opposed to development; however, we believe that certain conditions must be met before we can support oil and gas activities in Baffin Bay and Davis Strait,” the organization told the Nunavut Impact Review Board last month.

The Clyde River harvesters organization also says no oil and gas activity should be allowed in the region unless Qikiqtani Inuit consent to it.

To demonstrate consent, people in all communities in the region must get a chance to vote on the issue.

“We believe the moratorium should stay in place unless all communities in the region support oil and gas through community plebiscites,” the Clyde River submission said.

The Clyde River hunters made these comments in response to a big preliminary report on oil and gas development off Baffin Bay and Davis Strait that the review board and the Qikiqtani Inuit Association issued last fall.

It’s part of the long-awaited strategic environmental assessment on oil and gas development off the east coast of Baffin that the NIRB has worked on since February 2017. 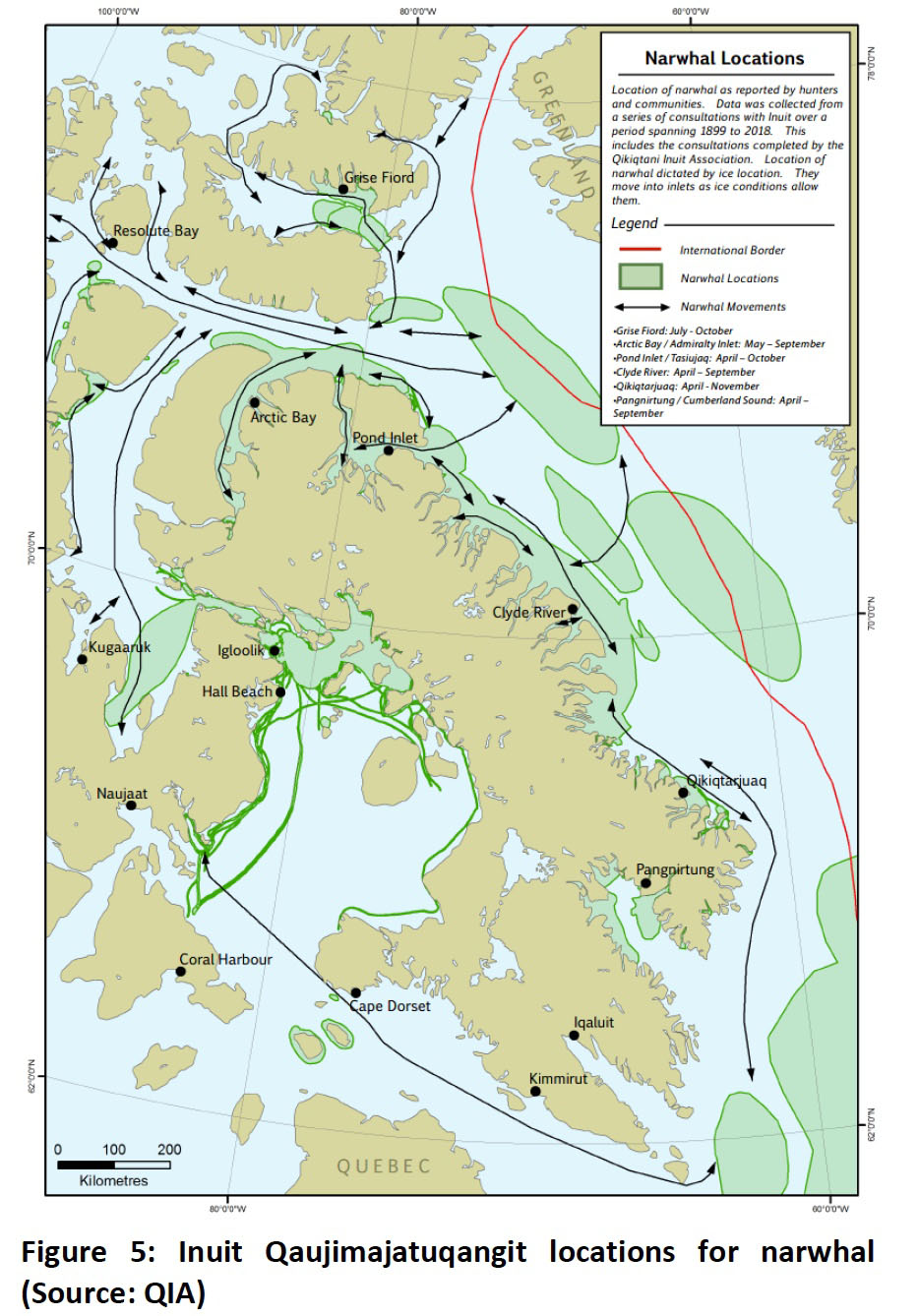 This map shows an example of the type of Inuit Qaujimajatuqangit that Qikiqtani Inuit Association gathered for a preliminary findings report issued last October on oil and gas development in Baffin Bay and Davis Strait. (QIA IMAGE)

Public meeting in Iqaluit this March

That work will likely wrap up soon, following a big public meeting that the NIRB will hold March 18 to March 22 in Iqaluit.

That work began just after Prime Minister Justin Trudeau announced on Dec. 20, 2016, that his government would issue no more licences for offshore Arctic oil and gas projects, subject to a five-year review.

Trudeau’s announcement angered many northern leaders who complained the federal government hadn’t consulted them, such as Peter Taptuna, who then served as Nunavut premier, as well as regional leaders in the western Arctic.

But Clyde River, on the other hand, is now famous for its opposition to oil and natural gas development, and for its victory at the Supreme Court of Canada, which ruled in July 2017 that a permit allowing a seismic testing scheme in the area should be revoked.

As for a federal oil and natural gas moratorium, the Clyde River HTO now says it should stay in place until after they get answers to multiple questions related to risks, benefits and information gaps.

One of the biggest of those information gaps is related to the potential benefits of oil and natural gas development.

Right now, neither the NIRB nor the federal government has provided enough information, the Clyde River HTO said.

“The NIRB’s preliminary findings report does not provide adequate information on projected financial benefits or job opportunities for communities.”

They also said they want partnerships with industry that guarantee benefits for the entire life cycle of a project, from exploration to decommissioning.

“As for now, we are not prepared to take advantage of any opportunities that may arise and therefore we are not convinced of the benefits of oil and gas for our community.”

The Clyde River HTO says other reasons for extending the oil and gas moratorium include:

• Inadequate baseline data on marine wildlife populations and the potential impacts of seismic testing and other sources of noise.

• Lack of information on the potential locations for required onshore facilities, such as pipelines and equipment for capping wells and drilling relief wells.

• A lack of capacity in Nunavut for responding to oil spills.

• A lack of any evidence for free, prior and informed consent. To fix that, they suggest holding community plebiscites.

• The lack of any information on how oil and gas development off Baffin Island could drive climate change.

NIRB, QIA neither for nor against

Neither the NIRB, nor the Qikiqtani Inuit Association, which has gathered Inuit knowledge for use in the strategic environmental assessment, has taken a specific position for or against oil and natural gas development off Baffin Island.

But it’s possible this might change after a final public meeting on the issue that the review board plans to hold between March 18 and March 22 in Iqaluit.

The application deadline for those who seek intervenor status at that meeting is Jan. 25 and the deadline for receipt of written submissions is Feb. 25, the NIRB said in a notice late last month.

As for Canada’s oil and gas industry, their trade organization—the Canadian Association of Petroleum Producers—suggests its members have little interest in developing oil or natural gas reserves off Baffin Island right now.

That’s because of the extremely high cost of operating in the area and the lack of infrastructure in Nunavut.

“The costs of exploring, developing and extracting these resources will be very high given the harsh environment, limited infrastructure and other challenges,” CAPP spokesperson Paul Barnes said in a letter to the NIRB this past August.

“Given the current market prices for both commodities there is limited interest in pursuing these reserves in the near future unless the commodity prices increase significantly,” Barnes said.