$45 million from Rapid Housing Initiative will go towards 7 projects, says minister of housing 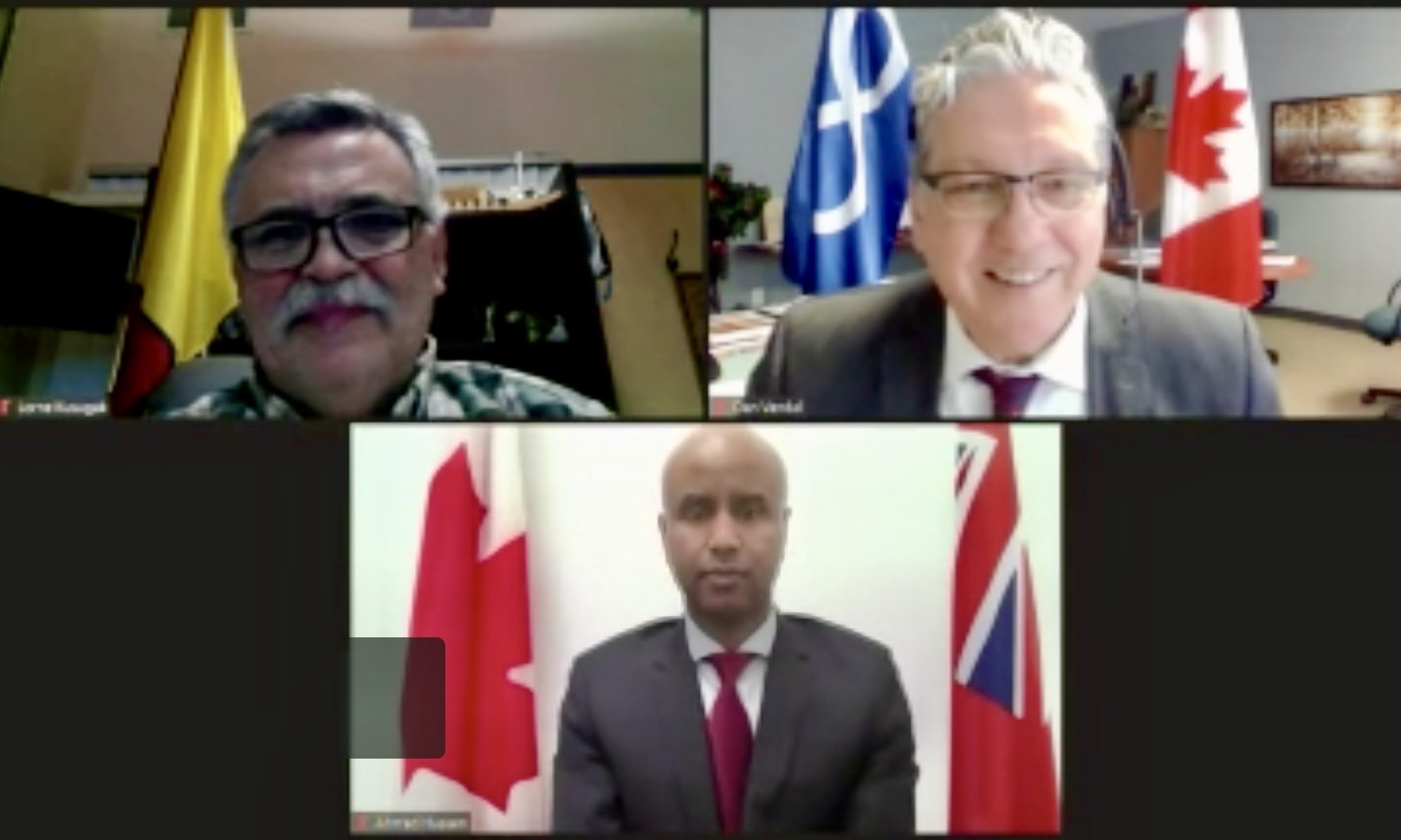 Ahmed Hussen, Canada’s minister of housing and diversity and inclusion (bottom) announced Friday that 101 houses will be built in Nunavut with funding from the Rapid Housing Initiative. Pictured also are northern affairs minister Daniel Vandal (upper right) and Lorne Kusugak, the GN minister responsible for the Nunavut Housing Corporation. (Image courtesy of Government of Canada).

The federal government is spending $45 million to build 101 permanent affordable housing units in Nunavut through the projects stream of the Rapid Housing Initiative.

“101 homes is a big number for any part of the country but particularly in Nunavut. I know it will make a huge difference,” Hussen said.

In Iqaluit, the funding will support 18 homes in Joamie Court and 33 in Tundra Ridge, two fiveplexes in Hall Beach, one in Kimmirut, three in Naujaat, two in Kugaaruk and two in Pond Inlet.

Construction on some of the projects has already begun and in some cases, completed, with  some units already occupied.

Hussen said the Nunavut housing will serve Inuit, with 50 per cent of the units dedicated to women and their children.

“When completed, these units will support people who are vulnerable, including women and children and those who are homeless or who are at risk of becoming homeless,” Hussen said.

The Rapid Housing Initiative is a $2.5 billion program dedicated to building over 10,000 affordable homes in Canada.

The $45 million funding is in addition to the Nunavut Housing Corporation’s contribution of $30 million, for a total of $75 million towards seven projects in the territory.

As for a timeline when Nunavummiut can expect to see the new houses, Hussen said it may be around 18 months. The Rapid Housing Initiative usually dictates that homes have to be built within 12 months for people to move in, but because of the unique challenges of building in the North, “we are usually a little bit more flexible with that requirement,” Hussen said.

In an email to Nunatsiaq News, Nunavut MP Lori Idlout said Friday’s announcement of new housing “should have happened a long time ago.”

“People in my riding of Nunavut are often forced to live in overcrowded, dilapidated houses because of a lack of supply and the high cost of rent. This is negatively impacting people’s physical and mental health,” she said.

She added that her predecessor, former MP Mumilaaq Qaqqaq, released a report last year detailing “the deplorable state of housing in the territory.”

“Since then, not much has changed,” Idlout said. “This past summer, Nunavut Tunngavik Inc. asked for $500 million for housing in Nunavut but the 2021 budget only set aside $25 million.”

“It is essential that the Liberal government listens to housing experts and addresses the severe underfunding of the Rapid Housing Initiative which pits communities against each other for the limited resources available. On top of this, New Democrats will continue to hold the government to their promise of an Urban, Rural and Northern Indigenous Housing Strategy, something they promised in 2017,” Idlout said.