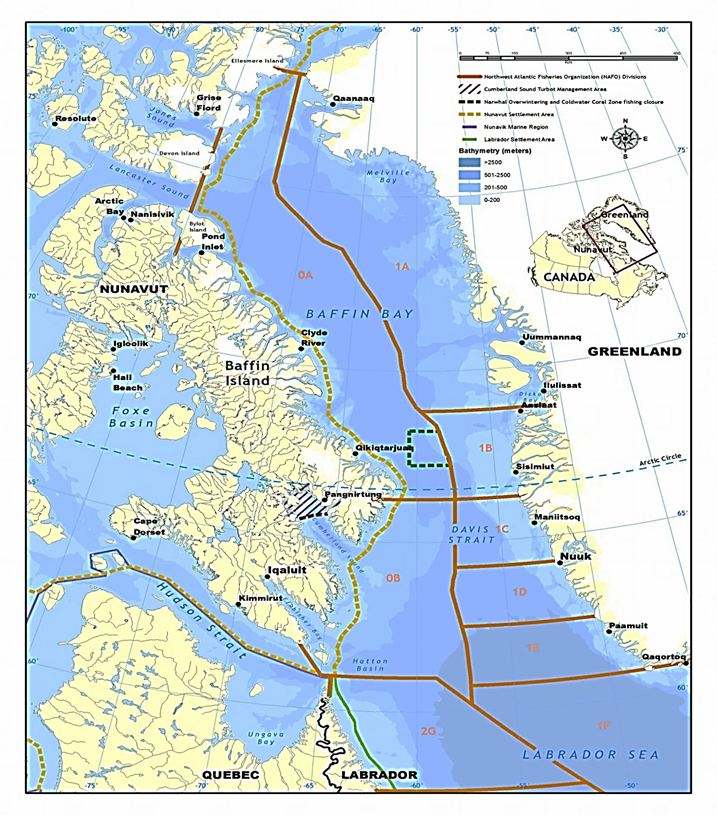 Northwest Atlantic Fisheries Organization Subarea 0 will not see the multispecies survey in 2020 that takes stock of the Greenland halibut population. (Image from the Department of Fisheries and Oceans)

Survey of turbot in Nunavut waters cancelled for 2020

Fisheries concerned that lack of science could have negative impacts

A Department of Fisheries and Oceans survey of species in waters adjacent to Nunavut has been cancelled for the second time in three years, and fisheries operators are concerned.

The information gleaned from this survey is the main source for establishing allowable takes for fisheries.

It continues to be the case that, due to the high cost of conducting these surveys, collaboration with Greenland is necessary.

In the Northwest Atlantic Fisheries Organization Subarea 0, which stretches along the coast of Baffin and Ellesmere islands into Baffin Bay, the multispecies survey has been conducted alongside Greenland since 1999.

The vessel previously used for the survey, R.V. Paamiut, was owned by Greenland and retired after the 2017 survey, the DFO told Nunatsiaq News in an emailed response. Greenland then started building a new vessel, which is supposed to be available next year.

In 2018, while Greenland worked out a contract for a survey vessel that could be used in the interim, no survey was conducted.

“Greenland contracted the Helga Maria for the 2019 and 2020 surveys. The 2019 survey was completed as anticipated, however Fisheries and Oceans Canada was recently informed by the Greenland Institute of Natural Resources that due to limited available ship time, the Greenland Halibut survey for 2020 cannot go ahead in either SA0 (Canada) or SA1 (Greenland),” said the DFO in its March 27 response.

Switching between survey vessels is not ideal because of potential differences in both the vessels and the configuration of their nets, which would lead to inconsistencies in the data collection, according to the DFO.

A comparative study between the vessels’ trawling should be done beforehand, which was not possible before the Helga Maria was used, due to the sudden retirement of the Paamiut.

Introducing an additional vessel into the mix this year would even further complicate the survey, the DFO said.

A concern among fisheries is that without up-to-date information, they could be waiting much longer to see adjustments to their allowable take to reflect changes in the stock.

“If you don’t maintain timelines in terms of stock surveys, stock resource might be doing great, but if you don’t have a survey to support that you could be waiting many years,” said Brian Burke, executive director of the Nunavut Fisheries Association.

He said we need a made-in-Canada solution to ensure the survey can happen every year, rather than being at the mercy of the availability of Greenland’s vessel.

“Our turbot fishery is the second-largest groundfish fishery in Canada,” Burke said. “It’s a very important fishery, so we can’t be left with not enough support to do the actual science to manage the fishery properly.”

When the cancellation came in 2018, he said there was less concern because it was just a single break in the timeline. Now, facing that cancellation again, it hits harder.

Only last fall, Nunavut turbot was granted Marine Stewardship Council certification, a years-long process to ensure the stock is sustainably fished and managed.

Burke said there could be concerns that in the future if those surveys aren’t up to date, this MSC certification could be affected.

In a March 11 release on the economic value of Nunavut’s offshore fisheries, the fisheries association’s secretary-treasurer, Sakiasie Sowdlooapik, did not mince his words about the lack of federal support for the industry in the North compared to other parts of Canada. He said this extends into scientific study.

“DFO support for NFA’s annual research program has also been lacking and the recent cancellation of the 2020 multi-species survey is unacceptable,” said Sowdlooapik.

“The federal government needs to come to the table and provide the same type and level of support that other Indigenous groups have been enjoying for decades, supporting capital acquisitions, licence and allocation purchases, and a greater focus on science and research in the North.”

In its response, the DFO noted that while it would be preferable to have survey data every year, this survey was conducted only every second year from 1999 to 2012.

“The improvement to annual surveys started in 2014,” said the DFO. “Every effort will be made to adapt management advice to the current situation, recognizing the changes in survey vessel and recent gaps in the time series.”

The DFO said the yearly survey will resume with the launch of the Greenland Institute of Natural Resources’ new survey vessel.