Full-time artists in Nunavut make less than other artists in Canada: report

“Maybe I’m just optimistic, but I thought we were pretty healthy as artists” 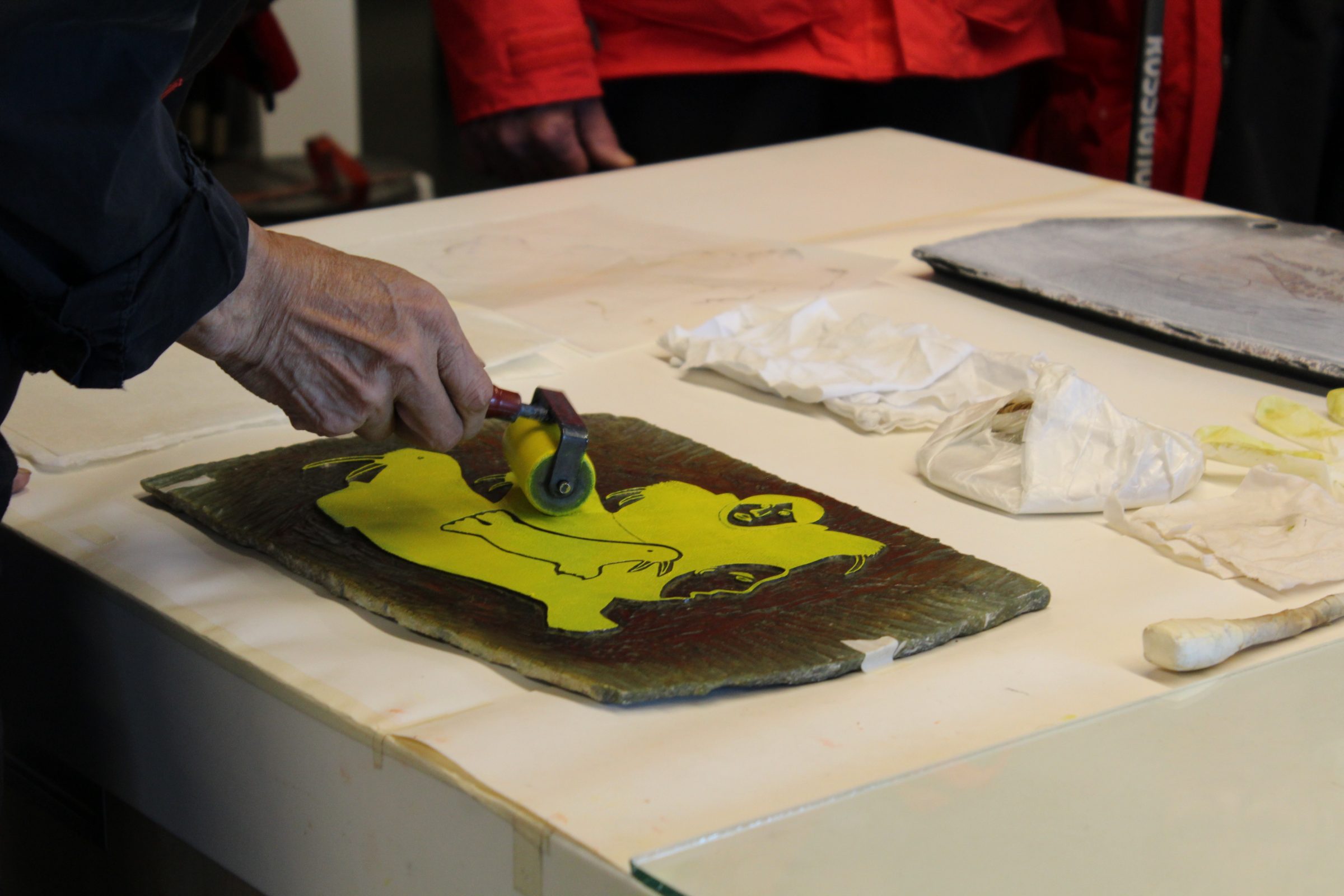 A Cape Dorset artist prepares a print at the Kenojuak Cultural Centre and Print Shop in Cape Dorset. Full-time artists in Nunavut make less than artists in other provinces and territories, a new report says. But as an Iqaluit artist notes, there are many reasons why that’s the case. (Photo by Emma Tranter)

Nunavut has the second-highest concentration of artists in the country, according to a new report.

With an artist population of 1.17 per cent, Nunavut falls behind British Columbia (1.18 per cent) by just a hair. Yukon had the third highest concentration of artists in the country at 1.14 per cent.

The report from Hill Strategies, an organization based in Hamilton, Ont., that conducts research on arts and culture, was released Nov. 27 and is based on a custom data request from the 2016 long-form census.

The report “examines information about artists in each province and territory who worked at their art more than any other occupation in May of 2016.”

In total, 66,000 artists in Canada said they spent more time working at their art than at any other occupation. In Nunavut, 180 people said this.

The report also looks at such factors as the age, gender, median income and self-employment rates of artists across the country.

It highlights that 26 per cent of the territory’s artists are women, which is far below the Canadian average of 52 per cent.

The amount of self-employed artists in Nunavut is also higher than the Canadian average of 52 per cent. In Nunavut, three per cent of all workers are self-employed, the report states.

Mathew Nuqingaq is an Iqaluit-based artist who works primarily in jewelry and runs a small studio on the shores of Frobisher Bay called Aayuraa Studio. Nuqingaq’s work is well-known both nationally and internationally and has appeared on the likes of Prince Charles and ex-cabinet minister Jane Philpott.

Nuqingaq said one of the reasons it looks like full-time Nunavut artists make less than the rest of the country is a lack of record-keeping among artists.

“We’re not very good at putting it on paper. If you don’t have your receipts, if you don’t have what you have sold, if it’s not written, then it’s going to be all over the place. If it goes through the stores, then you can get an idea of how much you’re making,” Nuqingaq said.

He added that artists in Iqaluit, who often sell their work at bars or restaurants in town, don’t necessarily keep track of what they make.

“If someone is selling at the bar, that is totally not recorded. Some carvers make quite a good living through that and through carving every day.”

Although Nuqingaq, who sells his work at festivals around the world, said he does inventory and generally keeps track of sales, an older generation of Nunavut artists might not.

“I’m the first generation in my family [that’s] writing. My parents didn’t really write. It’s not really in us yet. Maybe my kids will,” he said.

Another reason for the gap in earnings might be because of a lack of territorial and federal government support to Nunavut artists, compared to what’s available in southern Canada, Nuqingaq said.

“There’s not much support. When we look at it, artists have always had to stand on their own. There are not really any programs,” he said.

“We need artists to get together as a group, to work together.”

Nuqingaq, who opened his Iqaluit studio over a decade ago, said hearing numbers like those in the Hill Strategies report can be discouraging for Nunavut artists.

“It can be discouraging. ‘Why should I do art if I’m not going to make money? Why should I continue?’ I think there’s a little hump we need to get over and then we’re sailing good,” he said.

“Maybe I’m just optimistic, but I thought we were pretty healthy as artists.”