Resolution calls for environmental assessment to prioritize “the aspirations, views and knowledge of Inuit” 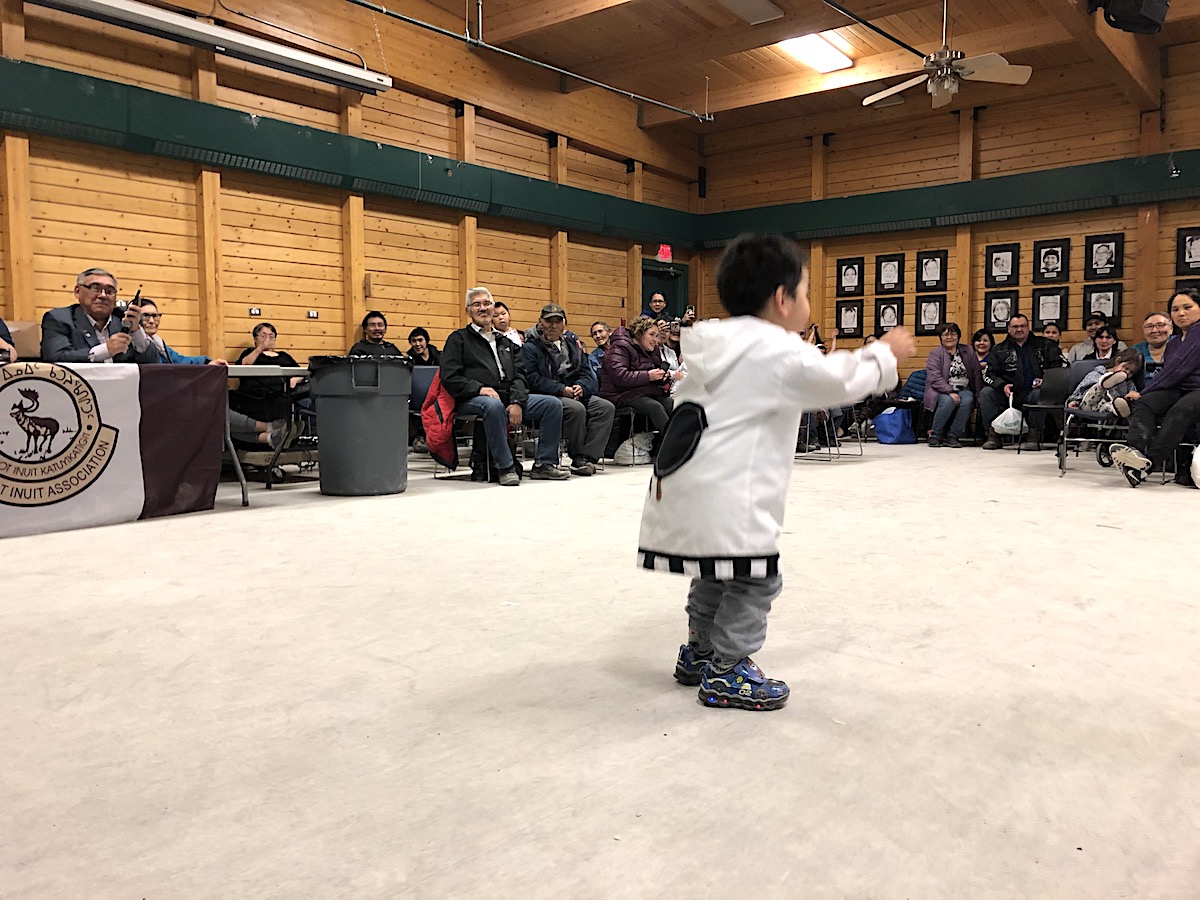 This little boy is eager to show off his Inuinnait dancing to those gathered on Thursday, Oct. 3, for the Kitikmeot Inuit Association’s feast. The feast wrapped up the KIA’s three-day annual general meeting in Cambridge Bay. (Photo by Jane George)

CAMBRIDGE BAY—The Kitikmeot Inuit Association has put its big Grays Bay road and port project at the top of its action list for the coming year.

A key resolution passed on Thursday, Oct. 3, at the end of the association’s annual general meeting, gave the board direction on developing materials for the project’s submission to the Nunavut Impact Review Board.

The resolution indicates that the submission for the $525-million project is unlikely to resemble the voluminous and highly technical environmental impact statement that was produced for Baffinland Mining Corp.’s Mary River iron mine project in north Baffin.

Instead, the EIS for Grays Bay will be one that “prioritizes the aspirations, views and knowledge of Inuit,” the resolution said.

The KIA says that all technical and legal requirements will be met, but it wants the EIS to reflect the association’s role “as a unique proponent with a long-demonstrated connection with the land.”

And they want the document to be easily understood by Inuit.

Inuit of all ages will be involved in developing the EIS content, which will be “visual wherever possible, in plain language, and (with) extensive use of the Inuit language,” the resolution reads.

The EIS won’t be solely focused on the avoidance or mitigation of harmful impacts, but instead emphasize the “potential positive benefits from the project, which can improve the well-being of Kitikmeot Inuit.”

The resolution followed the president’s report by KIA president Stanley Anablak in which he said the KIA wants to convert NTI’s $725-million loan to help prepare the project into a non-repayable grant. That intent was repeated in another resolution approved by the AGM.

KIA supports a call for help from youth, women and elders

Among the other resolutions, three focused on the reports presented by youth, women and elders at the meeting. The three panels brought up concerns such as elder abuse, food insecurity, drug and alcohol abuse, high rates of teen pregnancy, overcrowding, suicide, and need for more cultural and language programs.

Another resolution aimed at dealing with overcrowding at Larga patient residences in Yellowknife and Edmonton. It said the membership would like to see the facilities expand or “look at other avenues to support the increase in clients.”

The resolution also said Larga should seek longer-term contracts with the Nunavut and Northwest Territories governments to make that happen.

Casey Adlem, the president of Larga Ltd., a Nunasi/Kitikmeot Corp./Gwich’in Development Corp. joint venture, told the AGM that the Larga patient boarding residences in Yellowknife and Edmonton are running near or above capacity.

In Yellowknife the challenge is that many hotels are always full, so medical appointments have to be rescheduled, she said.

“This is not an ideal situation and is the absolute last resort, but in some cases is unavoidable.”

As a temporary solution for Yellowknife, Larga Kitikmeot recently renovated one of its visiting rooms into an additional room for two adults and up to two children, Adlem said.

The good news is that alcohol-related incidents at the patient residences are down over the past six to eight months.

“We use a system of warning letters that guests must sign when they’ve broken the rules, and if a flight or appointment is missed due to the use of alcohol they could be billed for additional costs,” Adlem said.

In another resolution, the KIA asked for the economic development officer positions that are currently managed by the hamlets to be moved to the Government of Nunavut’s Department of Economic Development and Transportation, because “having the EDOs working for the hamlets and receiving less pay and benefits can have an impact on the effectiveness of the positions.”

A stream of officials came to the three-day AGM, including the premier of Nunavut, two ministers, NTI’s vice-president James Eetoolook, and Richard Storrie, the president and chief operating officer of Rio Tinto’s Diavik diamond mine, part of which lies in western Nunavut.

Premier Joe Savikataaq came with a letter to Anablak about what the GN had done to respond to the KIA’s resolutions from the previous year, but on the final day of the AGM Anablak said the response showed the GN should do better.

The AGM wrapped up with a feast that included recognition awards for Tannis Bolt, who has served five years with the KIA, and Joey Evalik and Sarah Jancke, who have each been with the KIA for 10 years.

The KIA is now looking to hold elections on Dec. 9 in the five western Nunavut communities for three vice-president positions and the director position in Cambridge Bay. Nominations open on Nov. 4. 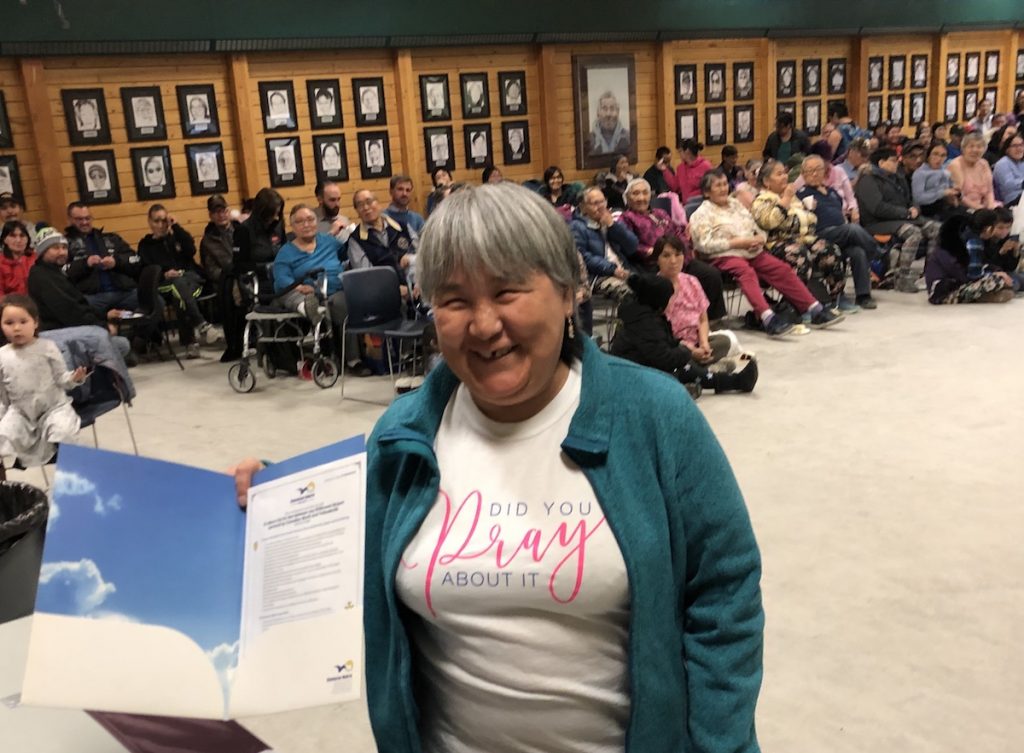 Mary Ann Maniyogina flashes a big smile as she accepts a certificate from Canadian North, worth two free tickets on the new merged airline. The draw for the tickets, donated by the company, took place on Thursday, Oct. 3, at the KIA feast. (Photo by Jane George)