Hours before vanishing, Ambar Roy walked out of the Iqaluit RCMP detachment

Released the morning of March 13, then refused a flight south, Ambar jumped out of a taxi and ran off into the hills 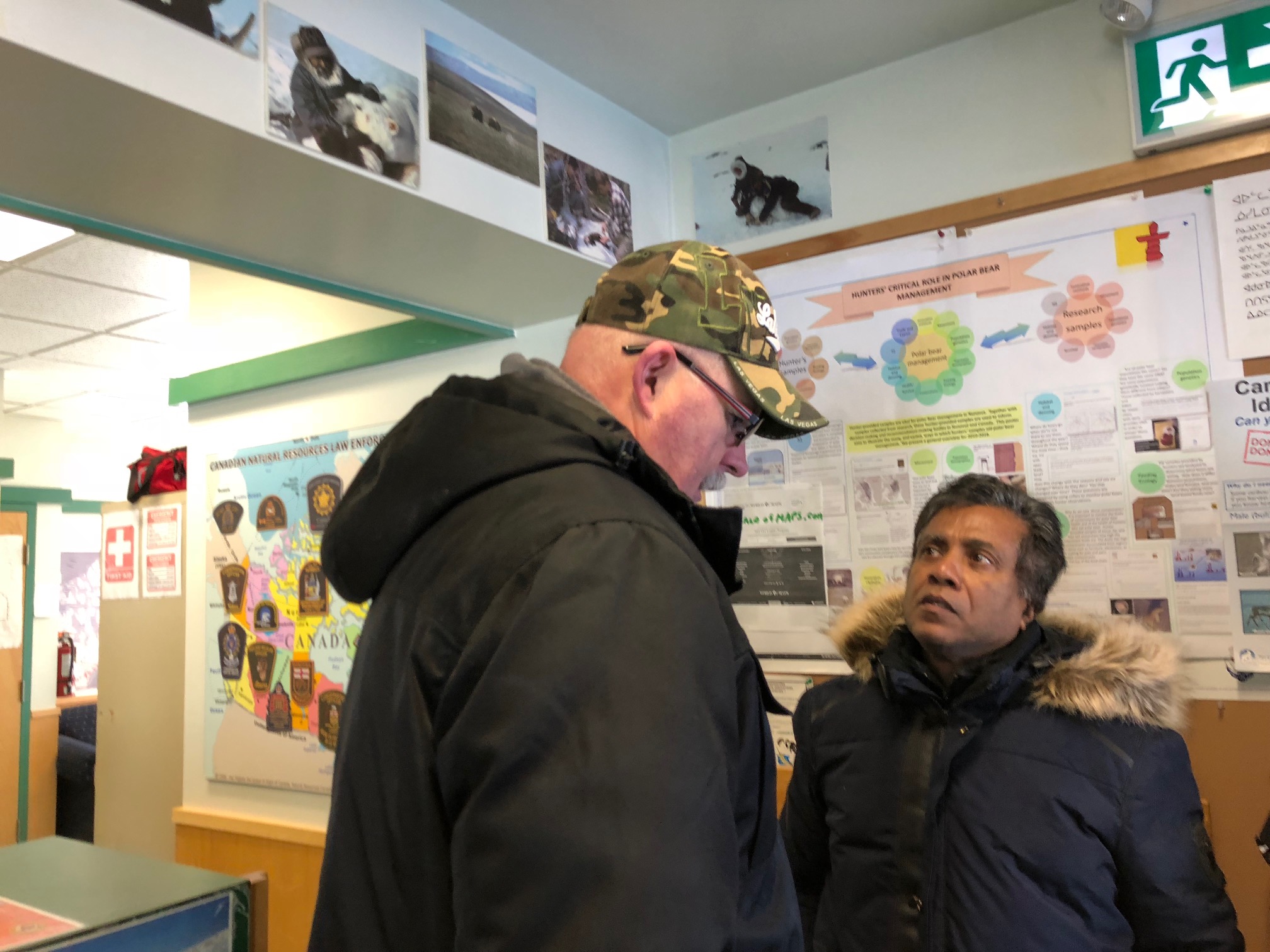 RCMP Staff Sgt. Garfield Elliott speaks to Amal Roy, the father of Ambar Roy, on March 24, before searchers prepared to head out on the land to look for the 18-year-old, missing since March 13. Elliott has now confirmed that Ambar was taken into police custody during the early morning hours of March 13 and released that morning at 9:15. (Photo by Jane George)

When Ambar Roy tried once again during the early morning hours of March 13 to sleep at Iqaluit’s so-called damp shelter, he wasn’t allowed in.

He was 18—a year younger than the shelter’s minimum age.

Now the RCMP have finally confirmed they were called in and took the university student into police custody at the RCMP detachment for intoxication. 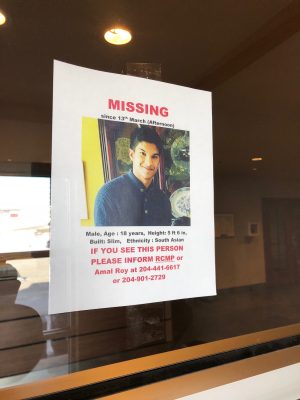 Ambar Roy’s parents put up posters around the city of Iqaluit, hoping for leads on their son’s disappearance. Some remained up after March 27, when the search for the missing teenager was called off. (File photo)

Previously, the police had said Roy’s whereabouts that night had “no bearing on his disappearance.”

Early on March 13, the last day he was seen anywhere in Iqaluit, Roy ended up in the Iqaluit RCMP detachment’s cells, although Roy was not as intoxicated as many teenagers his age who are taken there, said RCMP Staff Sgt. Garfield Elliott.

Elliott agreed to speak to Nunatsiaq News to clear up some confusion in the timeline of Roy’s last three days before his disappearance, after he arrived in Iqaluit on March 11 to visit his parents, Bijoya and Amal Roy.

Elliott said “we don’t report on everything we do,” referring to the various questions raised about Roy’s activities from March 11 to March 13.

“Yes, lots of people are curious, but unfortunately unless it’s had some impact on an investigation we don’t go to the nth degree on every detail,” Elliott said.

Roy’s visit to Iqaluit appears to have veered off in a bad direction on March 11, shortly after the teenager stepped off a Canadian North jet at the Iqaluit airport.

Roy was found vaping on the ramp right after his flight landed. He was removed from the area for using the handheld vaping device, which simulates the experience of smoking a cigarette and is prohibited on the ramp.

From the airport, Roy went home, but it didn’t go well. An argument ensued, resulting in Roy leaving, Elliott said.

“He ended up at the damp shelter. As a result of him not being 19 he was turned away and he went back home. He spent that night back home,” Elliott said.

Social services were not called in during this or other official encounters with Roy in the two days before he vanished out on the land.

“Why would we call social services for an adult?” Elliott said. “He was 18 years old.”

On March 12, Roy tried to get on a flight to Ottawa in order to head back to Waterloo, where he was a student at the University of Waterloo with his older brother.

Roy went to the airport, left his parents’ place, but was denied his flight “due to vaping again,” Elliott said.

“He was not allowed to board,” he said.

After that Roy hopped in a taxi. Police have learned that Roy didn’t pay for any of the taxis he took in Iqaluit from March 11 to March 13, but did a “jump and run,” without paying his fare.

Police have traced Roy to the Legion, where you are supposed to be 19 to enter, and to the Frobisher Inn, where he had worked the previous summer, and then to the damp shelter where Roy tried to go during the early hours of the morning of March 13.

“They contacted us. He was taken into custody for being intoxicated,” Elliott said.

There no issue with Roy, who was polite, the police who picked him up told Elliott, who did not have the details about Roy’s time in detention.

Elliott said he doesn’t know if Roy’s parents knew where he was: his mother told Nunatsiaq News in a telephone call earlier this month that they still thought he had returned to Ontario at that point.

As to why Roy received no intervention before his release, Elliott said, “we’re not mind readers, either. ”

“Our policy is very clear,” he said: if there’s any mention of self-harm, people who are released meet with mental health workers.

Many intoxicated kids come through the detachment, due to problems at home, and leave in the morning. There was nothing to distinguish Roy just “because he’s 18 years old and has a disagreement with his parents,” said Elliott.

So on the morning of March 13 Roy walked off, took a taxi and went back to the airport.

“He met with Canadian North people with regards to his inability to fly and, after that discussion was finished, he took another cab. At that point, he was dropped on the Road to Nowhere,” Elliiot said.

The taxi driver who drove Roy initially told police he drove him to the Road to Nowhere a day later than he did. But the police couldn’t find evidence of Roy at the airport or anywhere else on March 14.

Some confusion also remains over exactly where Roy was dropped off.

A taxi dispatcher told Nunatsiaq News that Roy was let out at the last apartment building in the Road to Nowhere subdivision. But Elliot said the police believe he was let out earlier, at a bridge under construction along the road. 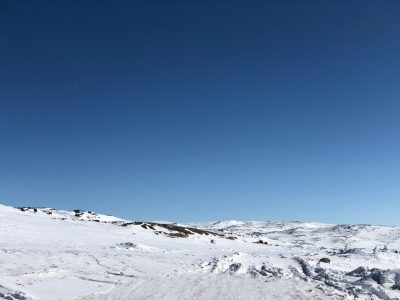 Down this empty road, which is sometimes blocked with snow, there’s a bridge under construction. That’s where police maintain Ambar Roy was dropped off by a taxi on March 13, although the dispatcher says he was left further up the road, at the last apartment building in the Road to Nowhere subdivision. (Photo by Jane George)

There, as Elliott told it, Roy hopped out of the taxi and ran off. The taxi driver stayed a while and honked his horn before leaving.

“The tracks that we start to find from there show a running mode, not walking, long and wide,” Elliott said.

Searchers followed the tracks into the hills, which could have provided cover from the taxi driver’s view, Elliott said.

From that point, Roy is thought to have headed towards the Arctic Winter Games Arena, then looped around towards Apex and back.

“We picked up those tracks which went way way up past Upper Base,” Elliott said. “We were shocked at how far Ambar actually walked”—about 10 kilometres in frigid temperatures and inadequate clothing.

The search was finally called off on March 27.

The RCMP said “given the time frame since Ambar has been last seen, it is believed Ambar has succumbed to the elements. Any further search would be considered a recovery versus a rescue mission.”

Young people are known for risky behaviour, said Elliott. Even so, Roy’s actions remain hard for the police to understand.

“Not every question is answered,” Elliott said. “I’m at a loss for words here.”

Elliott told how in Iqaluit recently an individual with no history of mental illness was spotted far out out on the bay ice, dressed in light clothing. Police were able to retrieve the walker, who had no intention of coming back, he said.

“Some days we just don’t end up with all the answers.”