Guide to include easy-to-understand infographics, Inuktitut and English text 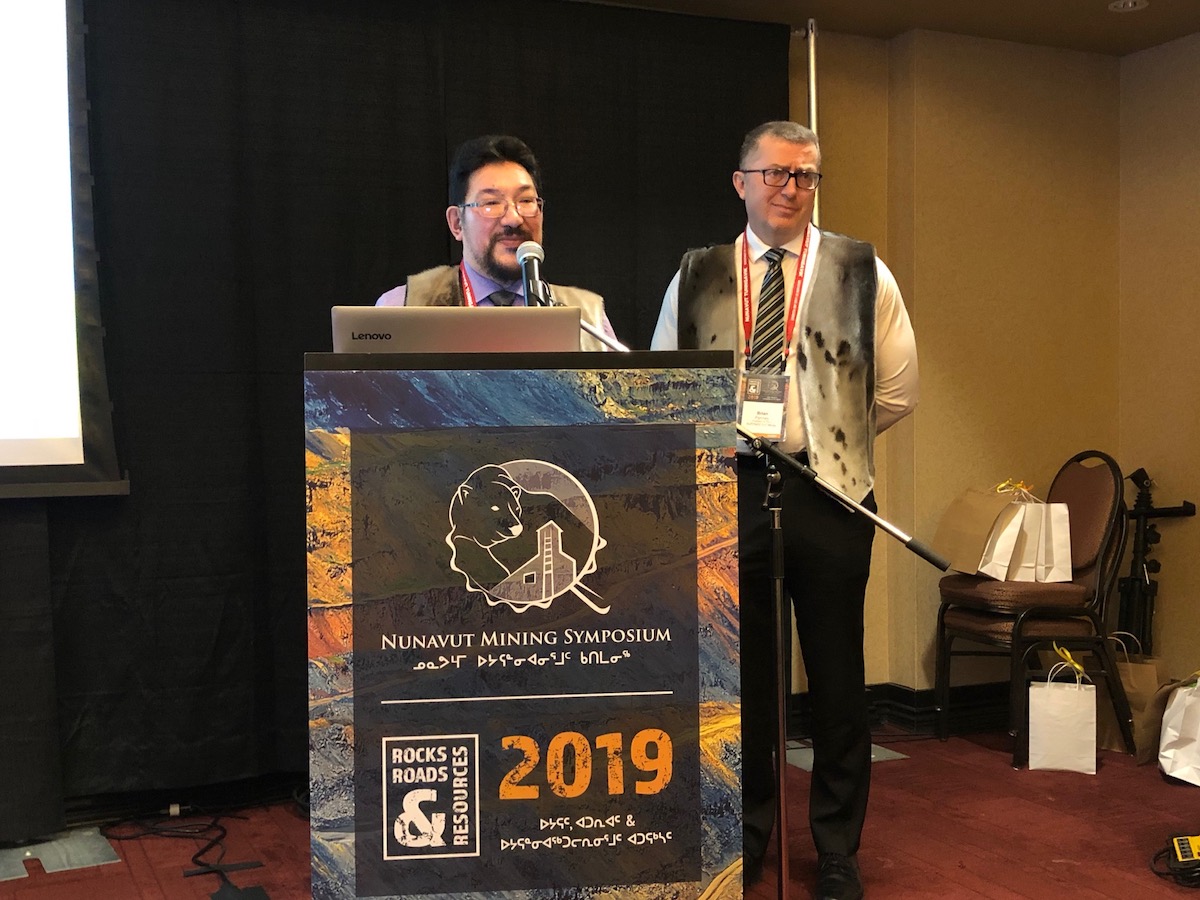 Levi Barnabas of the Qikiqtani Inuit Association and Brian Penney, CEO of Baffinland Iron Mines Corp., at session of the Nunavut Mining Symposium held on Wednesday, April 3, when they answered questions about Inuit employment at the Mary River iron mine in North Baffin (Photo by Jane George).

A Qikiqtani Inuit Association outreach project aims to make it easier for North Baffin Inuit to learn more about the impacts and benefits of the huge Mary River iron mine near Pond Inlet.

That’s because people in the nearby communities of Arctic Bay, Clyde River, Hall Beach, Igloolik and Pond Inlet will soon be able to see the important parts of the complex Inuit Impact and Benefit Agreement between QIA and the Baffinland Iron Mines Corp. in infographics that use Inuktitut and English.

Instead of the actual legal document, which runs to roughly 115 pages in English and 200 in Inutktitut, there will be a compact book, as introduced by QIA board member Levi Barnabas on Wednesday, April 3, at the Nunavut Mining Symposium in Iqaluit.

The book will feature yellow pages with Mary River project information, blue pages that explain IIBA articles and white pages on the various socio-economic, cultural and environmental impacts from the mine. 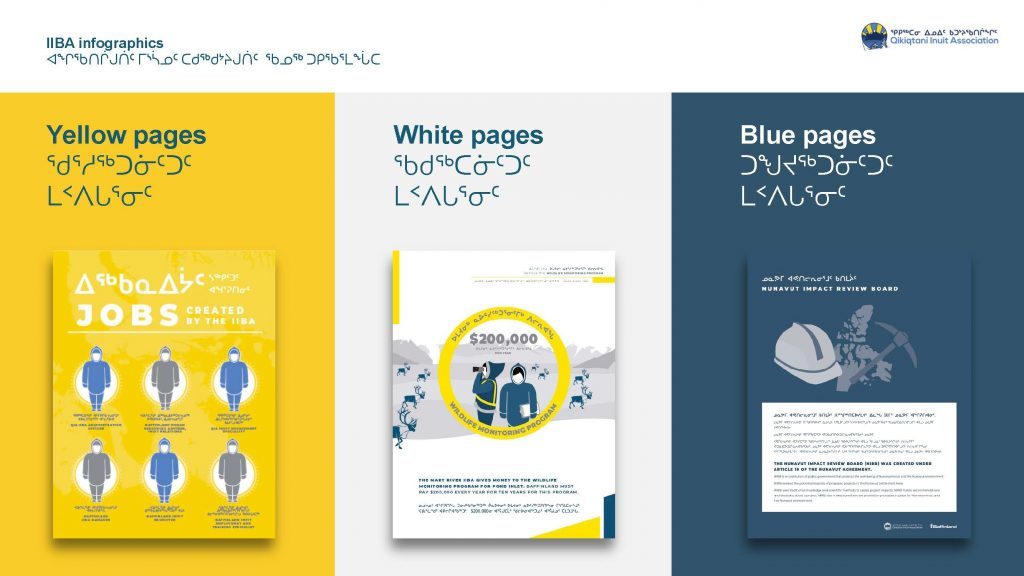 This shows what the colour-coded pages of the Qikiqtani Inuit Association book will look like. (Image courtesy of the QIA)

It will also include infographics explaining the IIBA and the complete legal text of the IIBA, and the  information will be available online, Barnabas said.

The tools should be ready in the fall.

Barnabas and Brian Penney, the CEO of Baffinland, also spoke about training and job possibilities at the mine.

Most of the non-technical jobs at the mine involve either “driving heavy equipment or repairing it,” Penney said.

Efforts to prepare local residents for jobs include a $10-million regional training centre in Pond Inlet, $1.5 million for Inuit training between 2021 and 2031 and a “Q-step” partnership, a $19-million employment program for Baffin Inuit with new funding from the federal government, in areas like work readiness, mining essentials, heavy equipment operating and trades apprenticeships.

Baffinland and the QIA initially agreed on the goal of achieving a 25 per cent Inuit workforce at the Mary River mine by 2016. But that had dropped to 12.5 per cent by early 2017.

That’s due, he said, to many changes.

These include a new $40-million accommodation camp, where workers now have private rooms with WiFi, television and their own bathrooms, as well as access to recreation.

Penney also said the retention of Inuit workers has improved due to what he called a new appreciation for the “core values” of respect, transparency and a respect for diversity.

That came from questioning around “what do we need to do differently,” he said

If the Phase Two expansion of the Mary River mine goes ahead, Baffinland will need many more workers: an additional 554 during construction and 1,010 more during operations.

The expansion now under review by Nunavut regulators would see production increased to 12 million tonnes of iron ore a year from the current six million tonnes, based around a 110-km railway running from Mary River to Milne Inlet.

A future expansion, for which Baffinland has already received approval from regulators, would see another railway extended south to Steensby Inlet and production rising to 30 million tonnes per year.

If the expansion moves ahead, Penney said it would bring more benefits to Nunavut: $680 million to the Government of Nunavut and $1.98 billion to Inuit organizations over the life of the mine.

However, a recent report by Oceans North, prepared by John Loxley, an economist from the University of Manitoba, concluded that ramping up production would produce fewer relative benefits for Inuit.

•  Blanket protection for Nunavut caribou not the only option: wildlife biologist

• Nunavut Mining Symposium brainstorms how to bring youth into mining