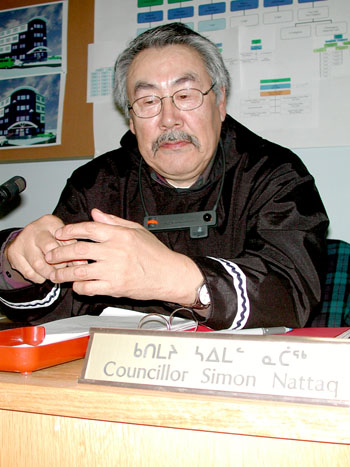 Coun. Simon Nattaq made remarks during Tuesday’s council meeting about Black taxi drivers being on their phone while driving. Mayor Kenny Bell said council “will deal with” those comments later. (File photo)

Iqaluit city Coun. Simon Nattaq’s comments about Black taxi drivers at Tuesday’s meeting led councillors to pause the session to consider whether he violated their code of conduct.

Nattaq singled out Black taxi drivers for “constantly” talking on their cell phones “in their language.” He made the comments during a discussion about a report on road safety in the city. Nattaq was speaking in Inuktitut, and his comments were translated by an on-site interpreter at the meeting.

“I have nothing against them but there’s been a lot of complaints from local people,” Nattaq said in Inuktitut.

Council’s public session was suspended for approximately 20 minutes. When it resumed, Bell gave Nattaq the opportunity to apologize for his statements, but he indicated, through an interpreter, that he didn’t know what to say.

“If you don’t know, then it’s definitely not a sincere apology,” Bell said, adding that council had moved on from the issue but “will deal with [it] at a later date.”

Brewster told Nunatsiaq News she plans to follow up with the mayor, and that she still expects Nattaq to apologize.

She said the comments “unnecessarily racialized” the issue of people talking on their cell phones while driving.

“The impact of casual racism is no less than the impact of overt racism,” she said in an interview.

When Brewster asked that council discuss Nattaq’s comments privately, she referred to the councillor code of conduct bylaw, which states that councillors must act in a way that is not discriminatory and to treat community members “in a way that does not cause offence or embarrassment to individuals or groups.”

“As an employer, and as a council, [we] must provide [a safe workplace] as well as a safe environment for all of our citizens,” Brewster said in an interview.

A statement from the City of Iqaluit to Nunatsiaq News said Nattaq’s comment doesn’t represent the values of city council.

“Councillors are accountable as individuals to follow the city’s code of conduct and human rights and anti-harassment policy,” statement reads.

Nunatsiaq News emailed Nattaq in Inuktitut on Thursday, requesting an interview to clarify his comments, but has not received a reply. In a phone call, Nattaq said he only speaks Inuktitut.

Iqaluit council has a history of punishing members for controversial comments. Last October, a then-councillor Malaiya Lucassie was asked to resign after she replied to a Facebook post by a Nunavut cabinet minister that seemed to criticize Black women who get abortions, and the Black Lives Matter movement as a whole.

Lucassie apologized once on Facebook and again in a statement to Nunatsiaq News. She resigned following council’s demand on Oct. 13.

The motion to call on Lucassie’s resignation was moved by Coun. Romeyn Stevenson and seconded by Nattaq.