Kitikmeot businesses hire lawyer to get compensation for stranded cargo 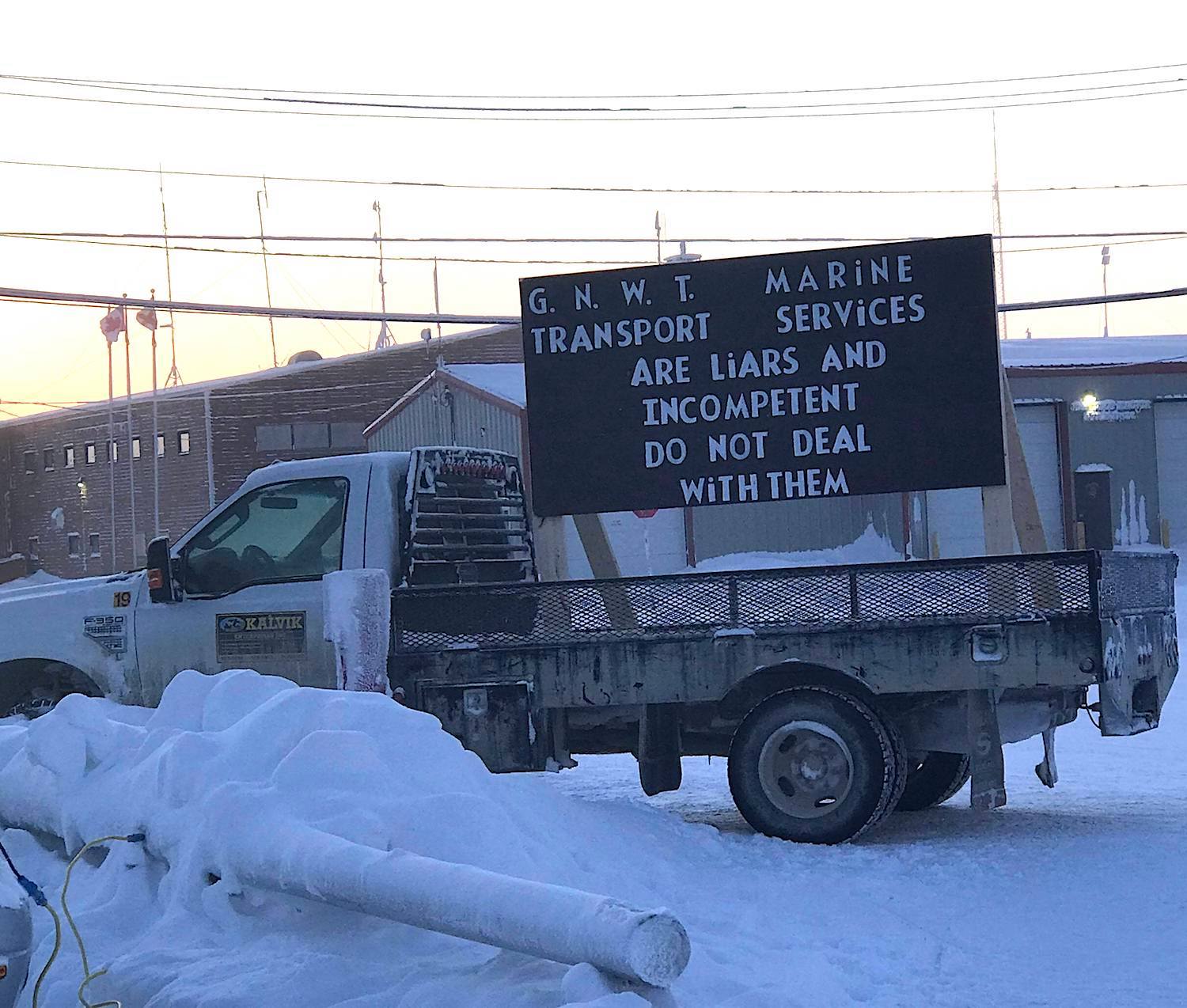 The October 2018 cancellation of the last barge into the western Nunavut town of Cambridge Bay still angers contractor Peter Laube of Kalvik Enterprises Inc., who put this sign on a truck during the Kitikmeot Trade Show to slam the Government of the Northwest Territories’ Marine Transportation Services. (PHOTO COURTESY OF KALVIK ENT.)

Outrage over last October’s cancellation of the Marine Transportation Services barge into western Nunavut and the company’s lacklustre response has yet to diminish.

The Kitikmeot Chamber of Commerce has now hired the Edmonton-based lawyer, Steven Cooper, to evaluate the legal options for MTS clients who never received their cargo.

Rostant and other MTS clients in Cambridge Bay and Kugluktuk say they continue to suffer big financial losses due delays in receiving needed materials, which are still sitting in Hay River and Inuvik.

Cooper, who has worked on many high-profile cases, for former residential school students and on the recently settled Ahiarmiut Inuit claim, met with the MTS clients during this month’s Kitikmeot Trade Show in Cambridge Bay.

Rostant said his company, Chou Consulting, sent a legally drafted letter to MTS this past November outlining their concerns and asking MTS, owned by the Government of the Northwest Territories, to provide written assurances about the state of their cargo and its storage as well as the company’s plans to deliver in 2019.

“Late last week I finally received a response from them. Their response is laughable to us and not something that I would/could consider signing,” Rostant said.

MTS has maintained that ice conditions prevented their barge from arriving on schedule.

“Yes, it was ice conditions that ultimately prevented delivery, but using ‘an act of God’ as your reasoning shows that they do not take any responsibility for their actions and decisions,” Rostant said in a document outlining his company’s dealings with MTS.

Rostant said MTS chose to take on private contracts and “rolled the dice” on attempting to schedule a later, and ultimately unsuccessful, barge delivery to the Kitikmeot.

This was “very clear and highlighted in the no confidence vote against Wally Schumann,” said Rostant, referring to the unsuccessful attempt to remove Schumann, the infrastructure minister, from the N.W.T. cabinet, due to the uproar over the barge cancellation.

“MTS’s plan backfired and we are the ones that have to now deal with their mess,” Rostant said. 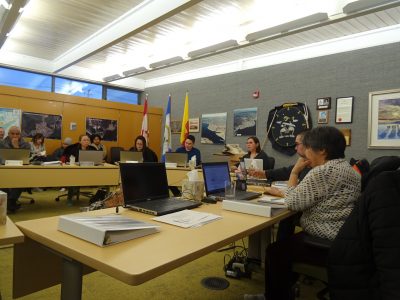 Cambridge Bay Mayor Pamela Gross speaks to representatives from the N.W.T. government and MTS during a teleconference last October on the barge cancellation. Afterwards, the promised airlift of cargo was much smaller in scale than initially planned. (Photo by Jane George)

He noted how there were initial plans for between 70 and 100 charter flights between the three communities of Paulatuk in the N.W.T., Kugluktuk and Cambridge Bay to fly in everything stranded on the barge in Inuvik.

Two weeks later, that commitment was reduced to a limited airlift. The N.W.T.’s government then said only fuel, dry goods and smaller vehicles, like snowmobiles and all-terrain vehicles, would go on the limited airlift.

“600,000 pounds of material was tendered for Cambridge Bay. In the end we got seven planes and 172,000 pounds—a fraction of what was promised,” Rostant said.

“This has been a big PR stunt by MTS to shut people up. Seven planes is laughable based on the scale of what is at stake for our local businesses and private residents. They have once again fallen way short on their changing promises and must be held accountable.”

The year 2018 marked MTS’s second season of barging, after the N.W.T. government purchased the assets of Northern Transportation Co. Ltd. for $7.5 million in 2016. NTCL had also left Cambridge Bay in the lurch in 2014, when it never brought in a large barge.

Rostant said his company invested everything in the construction of a four-plex residential unit in Cambridge Bay.

“It will cost our business $5,000 a month or $60,000 (year delay) in carrying cost on the material we have stuck in Inuvik. Our business is financially stretched and the unknown risk based on our concerns and MTS’s non-response has the potential to put us out of business,” he said.

“This is a very real possibility that we now have to address on a daily basis.”

Another angry MTS client, Peter Laube of Kalvik Enterprises Inc. in Cambridge Bay, put up a sign on his truck during the recent trade show urging people not to do business with the MTS.

Laube said he wanted to embarrass the company, which didn’t attend the trade show. It’s not the first public display of Laube’s anger: in November, at the Cambridge Bay landfill, as they burnt mouldy flooring that MTS had flown in, workers at Kalvik held up a sign saying “Thank-you, M.T.S.” 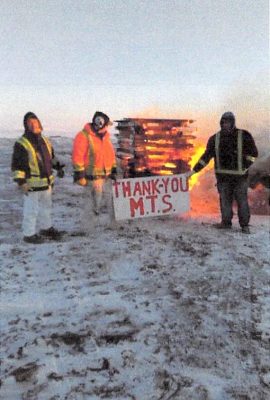 Laube said this week that he felt lied to, belittled and ignored by people at MTS who wouldn’t even return his phone calls. In the meantime, he said “we’re losing jobs over this.”

Laube said it is “shocking that GNWT has not stepped in and fixed the mess.”

“If they would just treat people properly and give people assurances and cover damages then people wouldn’t hesitate to deal with them again. It’s their actions that’s causing all this grief,” he said.

Last October, Ottawa announced it would give the GNWT $19.5 million to pay for four double-hulled barges to deliver fuel to northern communities, and opened a satellite training facility in Hay River that the Nunavut Fisheries and Marine Training Consortium will use.