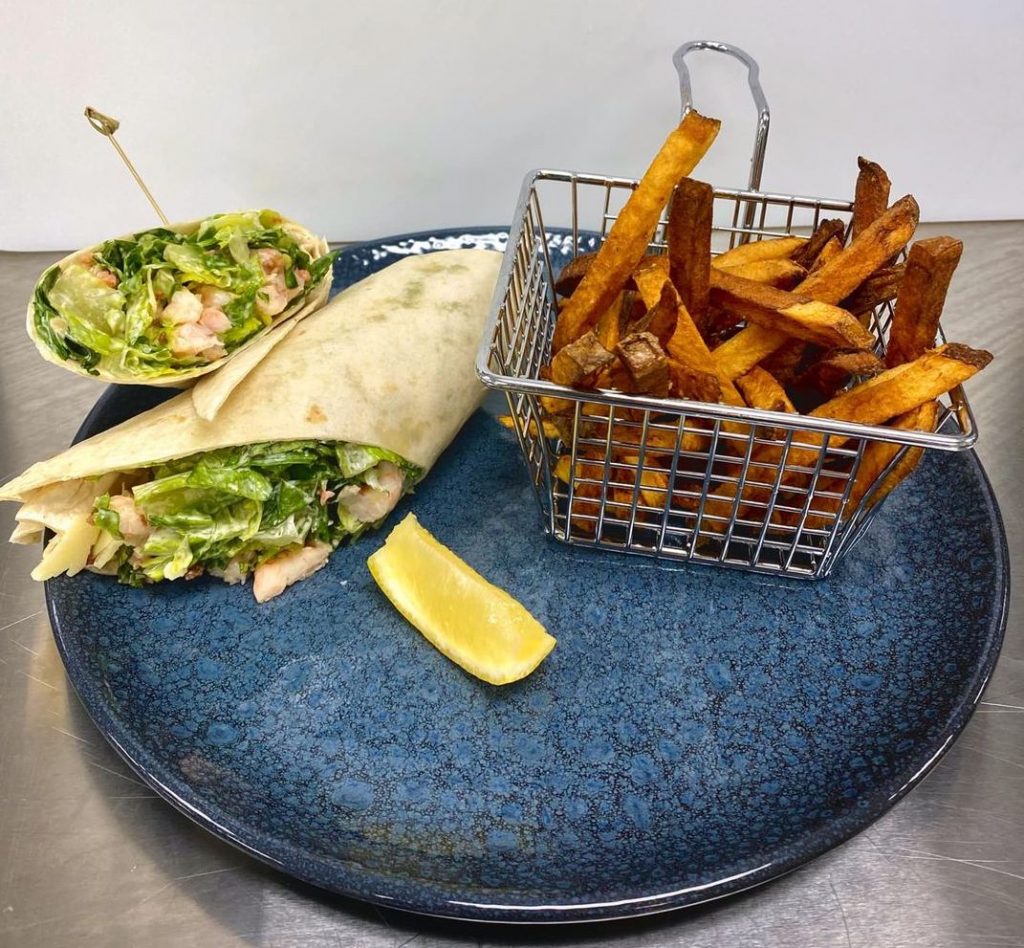 As the Aqsarniit restaurant in Iqaluit adapted its fine dining menu to takeout, head chef Brian Hourigan, along with Eliane Kanayuk-Gabriel, came up with this Arctic shrimp wrap. (Photo courtesy of the Aqsarniit Hotel and Conference Centre)

Owners and staff at two new Nunavut restaurants, one in Iqaluit and the other at the other end of the territory in Cambridge Bay, are breathing easier after the Nov. 30 announcement that restrictions limiting them to serving takeout would be lifted.

On Wednesday, food service and licensed establishments in the Kitikmeot and Qikiqtani regions may provide seated service at 50 per cent of their normal capacity, the Government of Nunavut said.

This means the Aqsarniit restaurant and lounge, which is part of Iqaluit’s new $70-million hotel and conference centre, can finally welcome people inside.

The Aqsarniit was ready to open to the public when Nunavut declared a two-week lockdown from Nov. 18 to Dec. 2.

“It was a bit of a bummer although we all understood,” said Herb Eaton, the operations manager at the Aqsarniit.

Iqaluit has seen no positive cases of the novel coronavirus, but it was just a matter of time before “we were going to feel some effects from COVID-19,” Eaton said.

So the Aqsarniit restaurant’s fine dining menu became a takeout menu. That was “a little rough” because the menu was not designed for takeout orders and “it can be hard to make some things look good when they come in a paper box,” he said.

As well, clients often became frustrated because there was only one phone line open to place orders, and sometimes the wait for order pickup was more than two hours.

After the first week, the restaurant changed its menu, dropping dishes like P.E.I. mussels and lobster macaroni and cheese.

But it also featured items like a wrap with shrimp “harvested from the purest of Arctic waters,” supplied by Qikiqtaaluk Fisheries Corp.

“You can only do so much, but it was nice to give people an idea of what they can expect when they come in,” Eaton said.

That will happen on Wednesday, with numerous preventive measures in place, such as sanitizing stations, Plexiglas dividers and masks for all staff.

Eaton said COVID-19 prevention is very much on their mind.

“We would feel terrible if we didn’t do everything in our power,” he said.

The lounge, with a half capacity of about 125, will open from 5 p.m. to midnight on Monday to Saturday, while the licensed restaurant will open every day, for lunch and dinner, for about 60 diners. 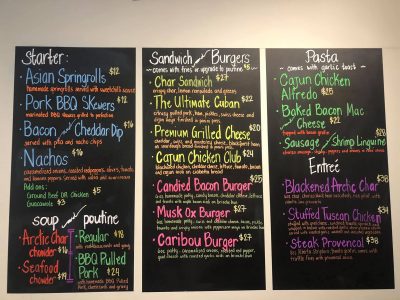 The Kuugaq Café in Cambridge Bay usually posts its menu on a blackboard. But for the past two weeks, the Kuugaq has only offered a takeout menu. (Photo courtesy of the Kuugaq Café)

Some 1,700 kilometres to the west, in Cambridge Bay, the Kuugaq Café had been reopened just two weeks before by its new owners, Adrixe and Marielle Nocon, when they had to move their operation to takeout only.

The Kuugaq Café closed earlier this year, when its former owners closed due to COVID-19 challenges.

Nocon said that business was “really good” for dinners and brunches when they first reopened the café in October, and “sometimes we had to shut off our telephone because there was too much takeout.”

But after the lockdown, business dropped off, although they changed their menu and even developed a special menu sold through the local convenience store Kalgen’s.

Last Friday, Kuugaq also tried to lure customers with an “Asian Night” takeout special, with “ginger beef that will warm you right up in this cold weather,” sweet and sour chicken balls, pork adobo and pork spring rolls.

But the reality was that the lockdown, as necessary as it was, took a lot of their sales and it was harder for people to come to get orders.

“We were losing quite a bit,“ Nocon said.

So was it a mistake to start up a restaurant in Cambridge Bay, in the middle of pandemic?

“We’re passionate on this one,” Nocon said. “It was my dream to have a restaurant, so when the opportunity came up we took it. We knew COVID was there but we’re taking the chance.”

As in Iqaluit, there have been no active cases of COVID-19 in Cambridge Bay.

But in Rankin Inlet, which has seen active cases, restaurants, like the Slap Shot canteen, must continue to operate on a takeout basis, the GN said on Monday.