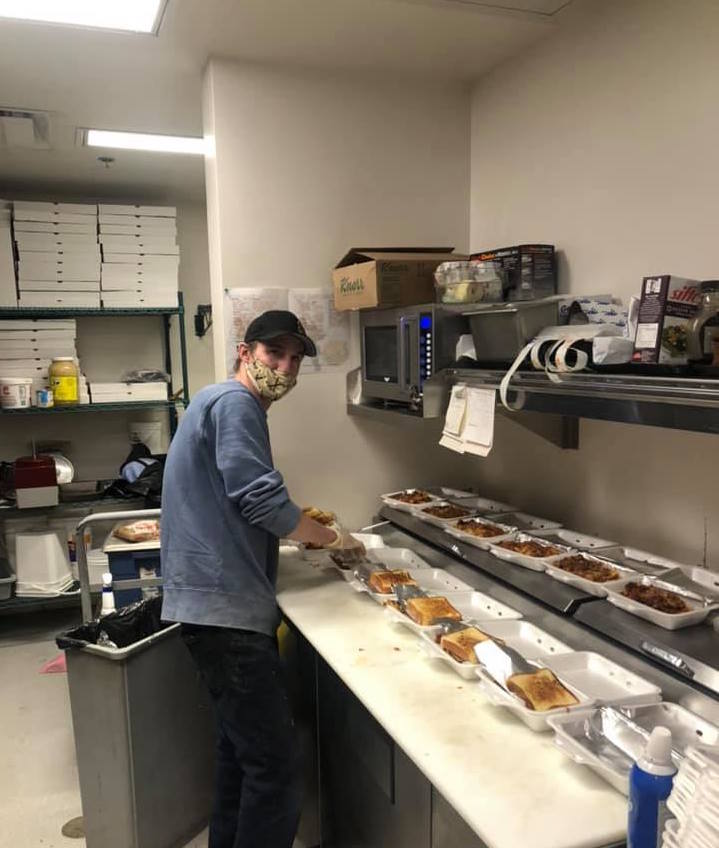 Businessman copes by serving up good food, adding “a bit of extra love”

Eleven days ago Rankin Inlet had no confirmed cases of COVID-19.

But that all started to change Nov. 11, with the first first confirmed infection in Rankin Inlet. On Sunday, Nov. 22, its roughly 3,600 residents learned that there are at least 15 positive cases of the new coronavirus in town.

“It’s a big emotional roller coaster,” said Burrill, who choked up as he talked to Nunatsiaq News about the worry that he and everyone else is feeling. 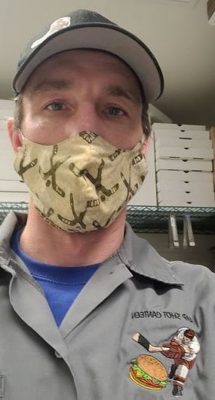 Chadd Burrill wears a face mask in in the kitchen of the Slap Shot Canteen. (Photo courtesy of Chadd Burrill)

Burrill’s Slap Shot Canteen had only been open for three months when the pandemic began in March, and he often donated pizzas to the hungry in town as he tried to make ends meet.

Located in Rankin Inlet’s new arena, his canteen was supposed to draw much of its clientele from the arena, which lays artificial turf down in the warmer months and ice for the rest of the year.

The arena would be a big draw in sports-keen Rankin Inlet, where National Hockey League star Jordin Tootoo got his start on the ice.

Burrill had expected to be busy, but then in March all events in the new $26-million arena were cancelled and it was made ready to become an emergency hospital, if necessary. But those preparations were not needed over the spring and summer, with no COVID-19 cases reported during that time.

Public health restrictions had finally started to ease in the summer and the canteen’s business picked up.

“This summer was pretty good. We had no cases, so we were operational, and everything went well for what we were doing,” Burrill said.

“We got back into the groove of things. We hired staff back and hired on new staff. The arena started opening up for the regular season, and they were putting the ice in.”

Then on Nov. 11 everything came to a halt again with the announcement of the first case of COVID-19 in Rankin Inlet.

The upcoming Terence Tootoo Memorial Hockey Tournament, honouring Jordin’s late brother, which had been postponed in March, was cancelled again until 2021.

So Burrill said he then went to his alternate game plan for the canteen.

“I have to think outside the box,” he said.

Burrill started by laying off his staff last week.

He said he told them, “You know, you got to get out of here. We have a confirmed case. I am definitely not going to put you in harm’s way.”

His galley kitchen would also be too small for two socially distancing chefs to work.

“This is my business. This is me,” Burrill said. As his family’s sole breadwinner, he said he is ready to take the risk of working with the public.

Burrill has since instituted a way for customers to pay for their orders without coming in, by using electronic money transfers.

And he also took a day last week to scrub down his kitchen from top to bottom.

When Burrill cooks, he now wears a mask.

But it’s not going to be easy for him to work solo.

When his only phone line rings, if he’s in the middle of cooking a hamburger or assembling a pulled pork poutine, he can’t always answer the phone. People do call back, he said.

“When you do everything alone it takes a lot longer. You don’t want to prep too much so you don’t waste, and you have to be clean,” he said.

But his goal is to make his food even better than before, he said.

“I want to give it a bit of extra love because they’re coming out to pick it up,” he said.

Customers must also sanitize their hands when they enter, socially distance and wear a mask when they pick up their orders.

“It brings me so much joy that people actually are coming in and want to support my canteen,” he said.

Right now, all Nunavut is under a territory-wide lockdown until Dec. 2.

But with the recent jump in COVID-19 cases in Rankin Inlet, and in the neighbouring communities of Whale Cove and Arviat, it’s possible that Rankin Inlet could see a longer lockdown.

As well, COVID-19 cases continue to surge in Manitoba, the province closest to Rankin Inlet.

Winnipeg is thought to be the source of the COVID-19 infections now in Nunavut: as of Nov. 22, there were 13,544 cases of COVID-19 identified in Manitoba and 243 new cases confirmed on Sunday, the largest increase on any single day to date.