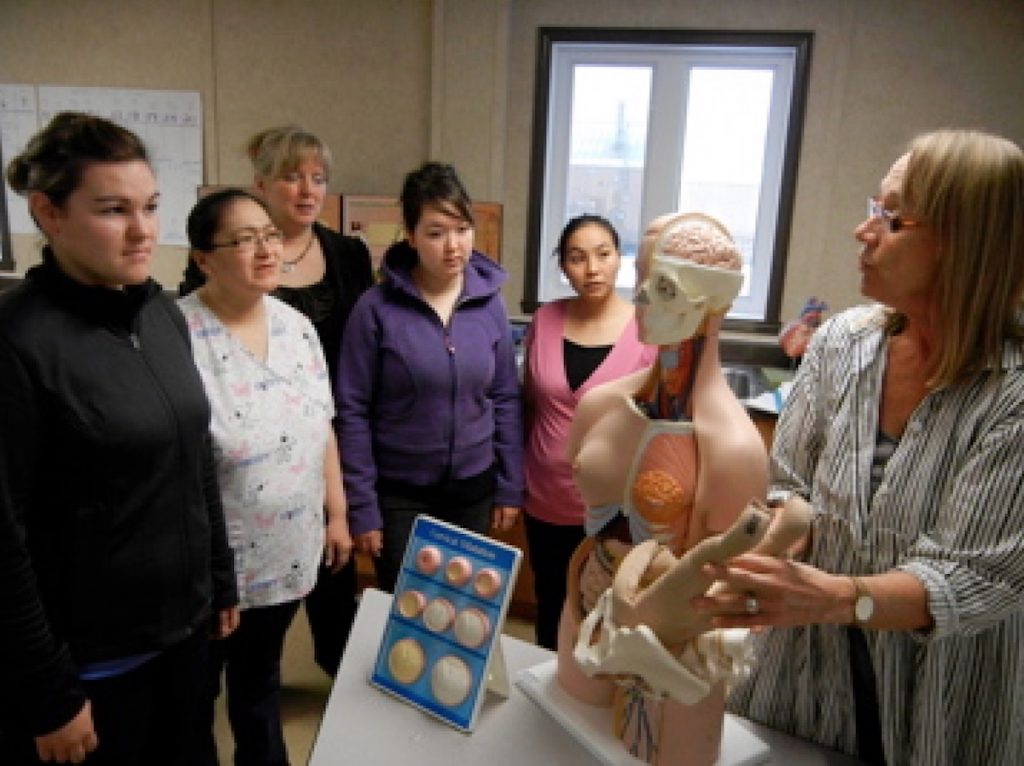 Instructor Elizabeth Hadlari uses a model of a woman’s body as a teaching tool during a 2011 session with students in a Nunavut Arctic College maternity care worker program in Cambridge Bay. (File photo)

A national association for Indigenous midwives says midwives and birthing centres in Nunavut need better support and funding if they’re to remain sustainable.

The birthing centre in Rankin Inlet recently closed. The Government of Nunavut said last week that prenatal care and birthing services for expectant mothers in the Kivalliq region have been temporarily suspended due to staffing shortages.

The recent departure of the centre’s two Inuit midwives, Catherine Connelly and Rachel Jones, prompted the closure. Both declined to speak to Nunatsiaq News but referred the newspaper to the National Aboriginal Council of Midwives.

Council co-chair Claire Dion Fletcher said she couldn’t speak specifically to the midwives’ reasons for departing, but pointed to ongoing sustainability issues in midwifery, and especially in Indigenous midwifery.

“I think this example in Nunavut is potentially an example,” Fletcher said. “In general, Indigenous midwives and midwives in the North are doing quite a bit of work.

“We know that having two Inuit midwives puts a lot of stress on the midwives and the midwifery program. They’re working really hard to take care of your community. And we want to see them well taken care of.”

Part of that means having a viable training program in place to graduate more Inuit midwives, she added.

Midwives deliver about a third of the births in Cambridge Bay and Rankin Inlet. Although there is now a midwifery program based in Iqaluit, there are currently no registered midwives working there.

The Government of Nunavut recently pledged support for midwifery in the territory. But of the 10 indeterminate registered midwife positions in Nunavut, there are only one or two that are currently filled.

Nunavut Arctic College used to offer a midwifery program based in Cambridge Bay, Rankin Inlet and, later, Iqaluit, until it lost funding.

“Inuit midwives can provide care in a way that midwives from outside the community just can’t,” Fletcher said.

“But it’s a hard job and there needs to be the ability to go off call, to spend time with your family and take a break from your work. And it’s not always possible when there’s not someone to cover for you when you’re gone,” she said.

“There needs to be a plan and the potential for more midwives to come into the community.”

While it was operating, Rankin Inlet’s birthing centre would staff four registered midwives and the occasional casual position.

Martha Aitkin, now an Ontario-based midwife, worked at Rankin Inlet’s birthing centre for about a decade, starting in 2006.

Aitkin was at the centre when both Connelly and Jones completed the midwifery program and started work there. She said both midwives were extremely competent, but they faced a lack of support and even racism from the health-care system.

“What I saw over that time was that they were just not heard and seen by a lot of other health-care staff, and I believe it was because they were Inuit,” Aitkin said.

“For example, [one of them] would be in the medical records room getting a chart for one of her clients, and a nurse from away would ask her what she’s doing there, assuming she was a clerk or a janitor, never believing that she could be a health-care provider,” she said.

“It was hard to put your finger on it, but you could see it and they could feel it.”

“The person at the health centre that they reported to didn’t understand how hard they were working and what they were doing and seemed to always expect them to do more,” Aitkin said.

With the closure of Rankin Inlet’s birthing centre, pregnant women in the Kivalliq will now be assessed and sent to either Iqaluit or Winnipeg to deliver, depending on their needs and their home community.

Nunavut’s Department of Health said there will be additional physician resources at the Qikiqtani General Hospital in Iqaluit to help provide prenatal care for expectant mothers in Rankin Inlet.

Nunavut Arctic College and the GN were asked for information, but had not responded by our deadline.