“I think we all have to have that sense of hope” 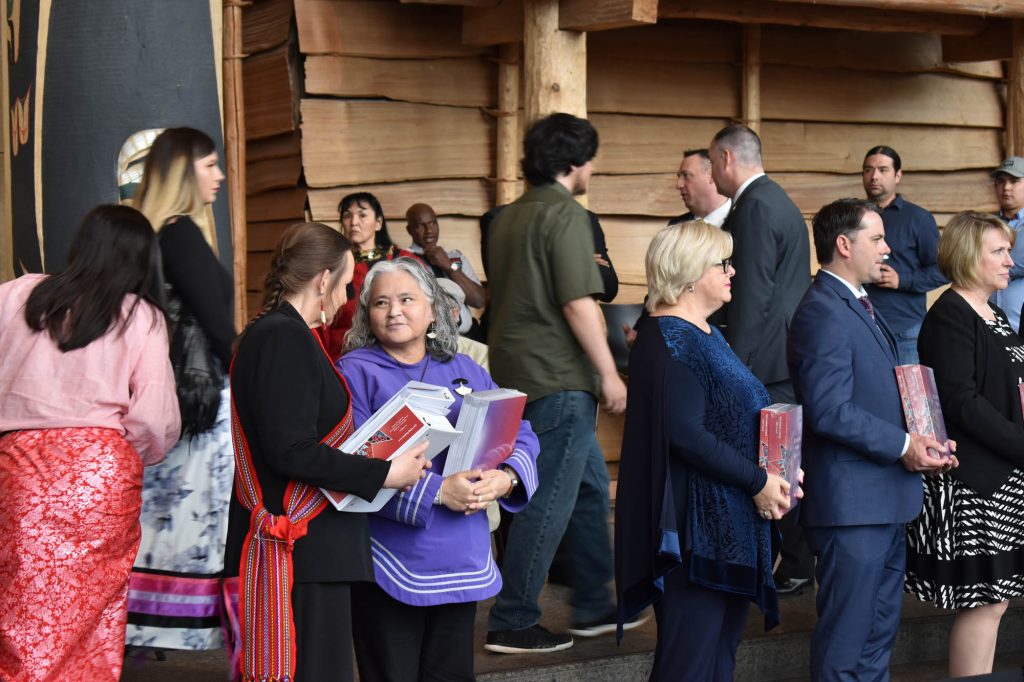 Elisapie Sheutiapik, Nunavut’s minister of family services, receives a copy of the final report of the National Inquiry into Missing and Murdered Indigenous Women and Girls on June 3 at its closing ceremony held in Gatineau, Quebec. Sheutiapik hopes the report will mean more funding for housing and health services in the territory. (Photo by Kahlan Miron)

The Government of Nunavut hopes the new report released by the National Inquiry into Missing and Murdered Indigenous Women and Girls will translate into funding for much-needed infrastructure across the territory.

Elisapie Sheutiapik, Nunavut’s minister of family services and minister responsible for status of women, attended the commission’s final ceremony on June 3 to receive its final report on behalf of the GN.

Sheutiapik said she left with “a sense of hope” from seeing the Inuit-specific section of the report, which comes with 46 distinct “calls for justice” based on feedback the commission gathered throughout the Inuit Nunangat.

“It’s very significant for our territory, when we have violence rates that are 11 times higher than the national average,” she said. “Last year, we had two murder-suicides in Iqaluit alone.”

Sheutiapik said housing is probably the most pressing need for Nunavut—for many reasons, but not least of them how overcrowded housing conditions can trigger incidents of domestic abuse.

And that just so happens to factor into the first of those Inuit-specific recommendations, for all governments to honour their socio-economic commitments to Inuit.

“Articles 23 and 24 of the Nunavut Land Claims Agreement, and commitments by governments to provide for the housing and economic needs of Inuit, must be fully complied with and implemented,” the recommendation reads.

Mental health support should be considered another priority for the territory, Sheutiapik said, as another call for justice highlights the need for “accessible health and wellness services within each Inuit community,” including treatment for trauma and addictions.

“In Nunavut, we have capacity issues,” Sheutiapik said. “So hopefully, with this report coming out, there’ll be a coordinated, national effort to combat it.”

Some of the report’s recommendations include services that Nunavut has already launched, Sheutiapik noted, like its new Umingmak centre to support victims of childhood abuse or the GN’s new therapeutic justice pilot program.

Just what role the Government of Nunavut could play in helping to implement those recommendations remains to be seen. Coming off a short but busy spring session of the legislature, cabinet has yet to sit down to discuss the report.

For her part, Sheutiapik said she’s still reading through the report and plans to table it in the legislature when it sits next in October.

Sheutiapik has been critical of the commission’s work in the past and not just as a politician; watching the national inquiry unfold over the last two and half years has been a personal journey for Sheutiapik and her family.

In 1986, her sister Mary Ann Birmingham, then just 15, was murdered in the family’s Iqaluit home. The case has never been solved.

Sheutiapik’s family members testified at the commission last year, calling on authorities to re-open the investigation into Mary Ann’s death.

“In our view, it’s been dormant all this time,” Sheutiapik said. “But we’re getting a sense that it’s an active file again, and we’re hoping that stems from the inquiry.”

To that end, she believes the commission has already had an influence on how institutions will treat cases of missing or murdered Indigenous women going forward.

“I think we all have to have that sense of hope,” she said. “We have too much invested into this.

“At the end of the day, hopefully this document will allow the federal government to assist in very much needed infrastructure that will help us deliver our programming better.”