“We are grateful to every person who spoke, listened, and shared” 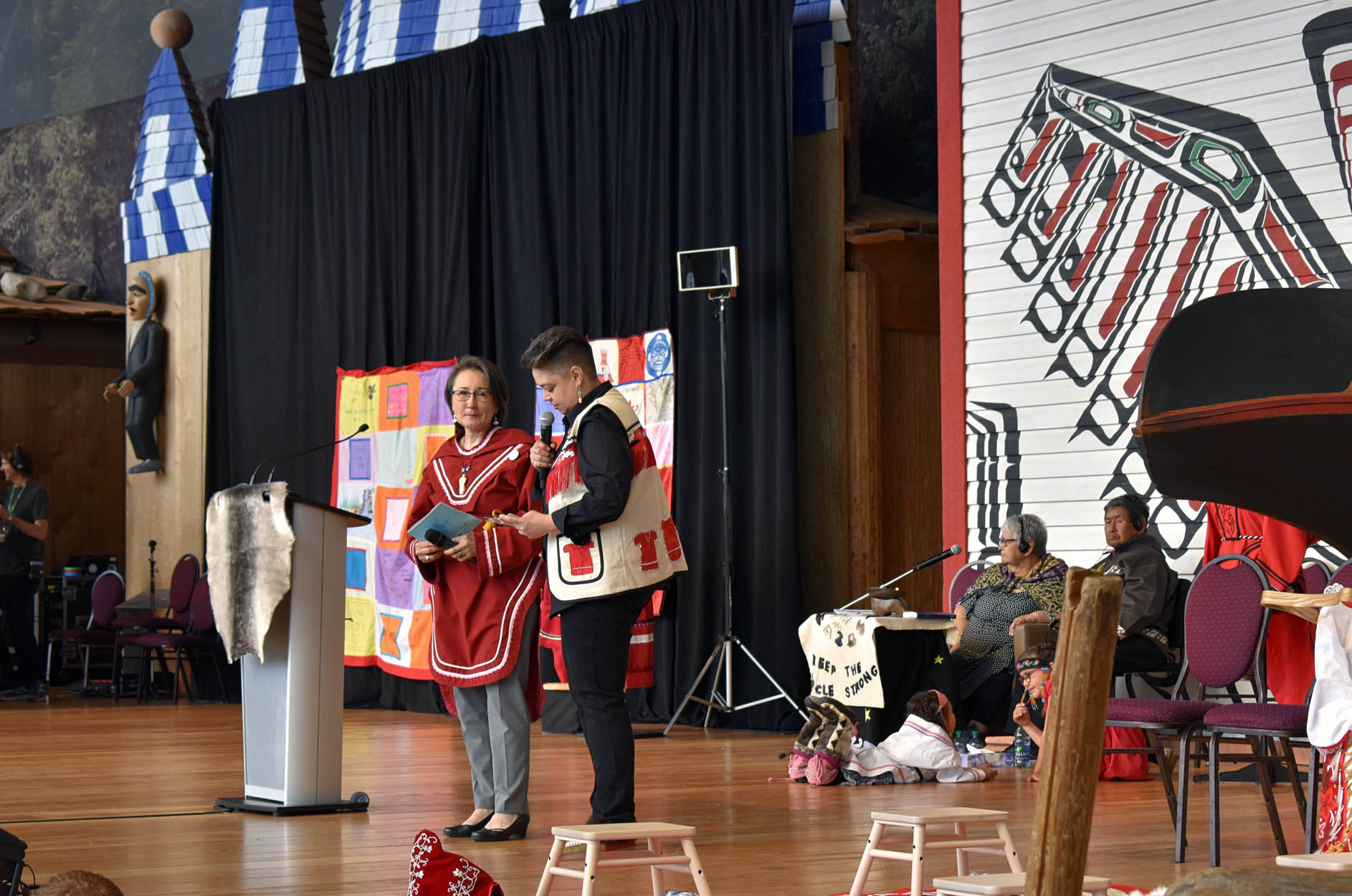 National inquiry staff members Lisa Koperqualuk, left, and Valerie Courtois co-host the closing ceremony on June 3 at the Human Rights Museum in Gatineau, Que. Behind them, Nunavut elder Meeka Arnakak tends to the qulliq lamp, which was present at all the inquiry’s hearings. (Photo by Kahlan Miron)

Inuit groups say they welcome new recommendations made on Monday by the National Inquiry into Missing and Murdered Indigenous Women and Girls.

Following an inquiry that lasted two and a half years, the commission released its final report on Monday, June 3, called Reclaiming Power and Place.

In it, the inquiry concludes the high rates of violence and death among Indigenous women amount to a genocide, driven by ongoing human rights violations.

Pauktuutit Inuit Women of Canada held standing through the commission, on behalf of a handful of other Inuit organization.

“Pauktuutit acknowledges that it was extremely difficult for Inuit, most of whom had to travel significant distances to participate,” the organization said in a news release on June 3. “We know that it was immensely difficult, and we are grateful to every person who spoke, listened, and shared.”

The national inquiry’s final report issues 231 calls to justice or recommendations, starting with a national action plan to address violence faced by Indigenous women, including major reforms to the justice system and better protection for Indigenous language and culture.

The report includes a section on distinct Inuit experiences and realities, which highlights the impact of the relocations and other government intervention on Inuit culture and well-being.

Pauktuutit president Rebecca Kudloo said it was encouraging to see Inuit-specific recommendations included, a request the women’s group made in its final submission to the inquiry last year.

A total of 46 of the report’s recommendations are Inuit-specific. Among them are calls for:

The Inuit-specific recommendations are listed in the final report, from numbers 16.1 through 16.46.

Kudloo said she was disappointed to see there was no mention of the growing number of Inuit moving to urban centres included in the report.

But Pauktuutit will be keeping a close eye on the provision of healing programs, housing and shelters across Inuit Nunangat, she said.

For its part, Inuit Tapiriit Kanatami said it supported each of the Inuit-specific calls in the report and would do its part to help to uphold them.

“I am optimistic that the findings of this report and its calls to justice will help leverage the actions necessary to remedy the complex challenges that put Inuit women, girls and 2SLGBTQQIA people at greater risk for experiencing violence,” said ITK president Natan Obed.

“This starts with Inuit men—and especially those of us in positions of influence—who have a responsibility for speaking out and taking action to end violence against women and girls in our households, communities, and society.”

The national inquiry’s report drew from a series of community hearings, expert panels, and the testimony and input of over 2,300 people, including hundreds of Inuit who gave testimony or statements.

Prime Minister Justin Trudeau said on June 3 that his government would take the inquiry’s calls to justice and put them into “meaningful, Indigenous-led action.”