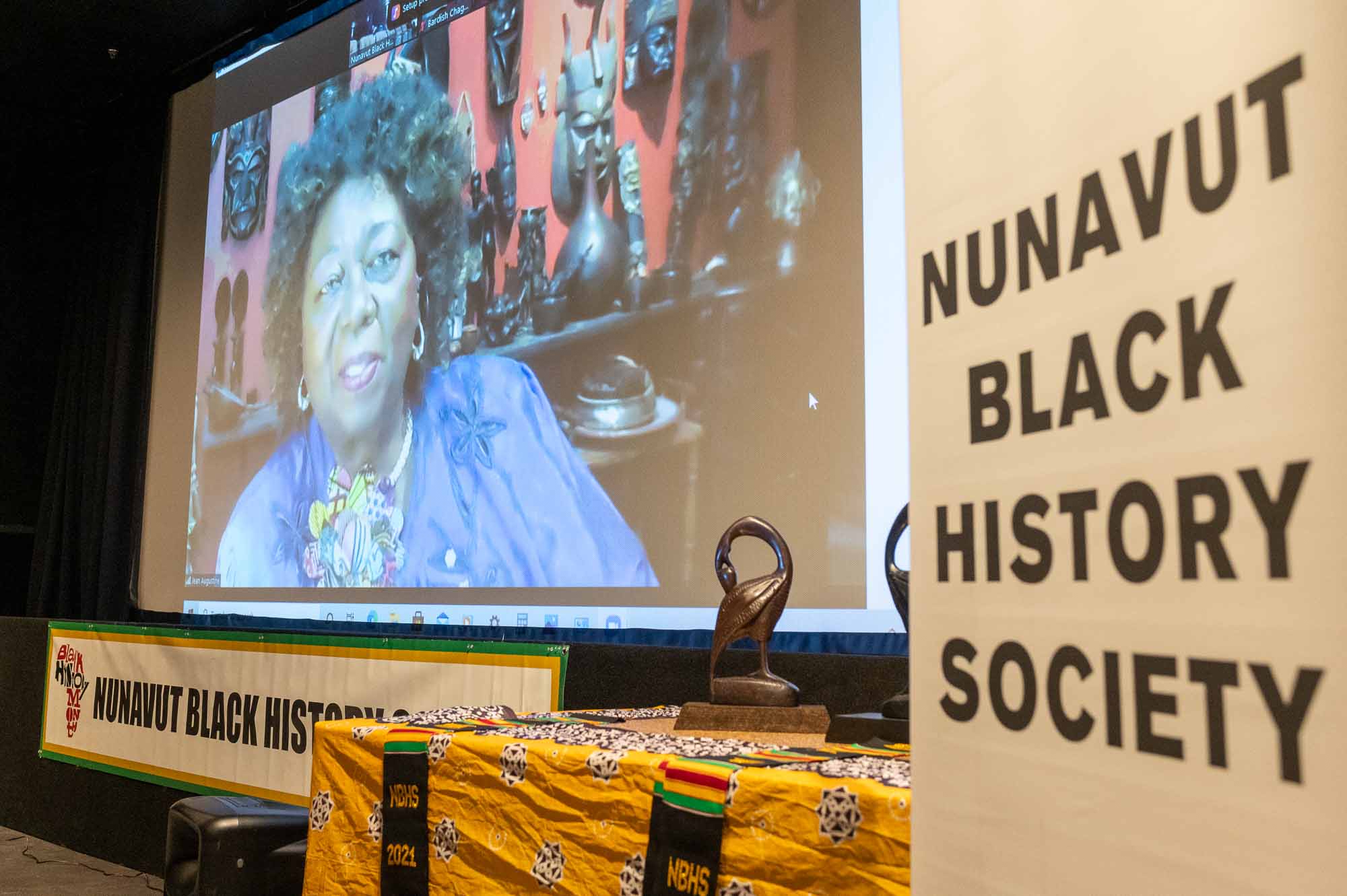 The Nunavut Black History Society presented Jean Augustine via videoconference with a Sankofa Lifetime Achievement Award on Feb. 7, during the opening ceremony of their Black History Month celebrations. (Photo by Dustin Patar)

Jean Augustine’s career has always been larger than life, but on Feb. 7 her on-screen appearance at the Astro Theatre in Iqaluit was just that.

“I’m so very pleased,” said Augustine. “I will have my Sankofa, when it reaches me, in a place where I can show it when I make my speeches on Zoom.”

The audience, noting Augustine’s large collection of African art behind her, burst into laughter.

Among those in attendance were Bardish Chagger, the federal minister of diversity, inclusion and youth; Margaret Nakashuk, Nunavut’s minister of culture and heritage; and Winston LaRose, the inaugural recipient of the Sankofa Lifetime Achievement Award.

While the award will join many others Augustine has earned over her career, the form, meaning and significance of the Sankofa was not lost on her.

The word Sankofa is a sacred ancestral term from the Akan people of Ghana, in West Africa, which translates to, “We must go back and reclaim our past so we can move forward.”

The figurines on the award itself depict a mythical bird with its feet firmly planted forward and its head turned backwards.

“This is the way we have to move,” said Augustine.

“What can we do today with the knowledge that we brought from the past? And how can that knowledge help us to move forward.”

Augustine also took the opportunity to echo a point she made during her last visit to Iqaluit two years ago.

“Black History Month is not just for Black people,” she said.

While Augustine would elaborate on more than a dozen ways to advance social justice, the theme of her keynote address, she circled back to events earlier in the night, including the lighting of a qulliq and the pouring of a libation.

“That’s the way we ensure that we know each other, that we are partners and we are allies,” she said.

Among the other Sankofa awards presented at the ceremony were:

Festivities to honour the legacy and contributions of Black Canadians will run throughout the month and continue into March. Here is a full list of the upcoming events:

All Black History Month Film Festival screenings will be held at the Astro Theatre and will begin at 6 p.m.

This story has been corrected to indicate Jean Augustine was Canada’s first female Black federal minister.