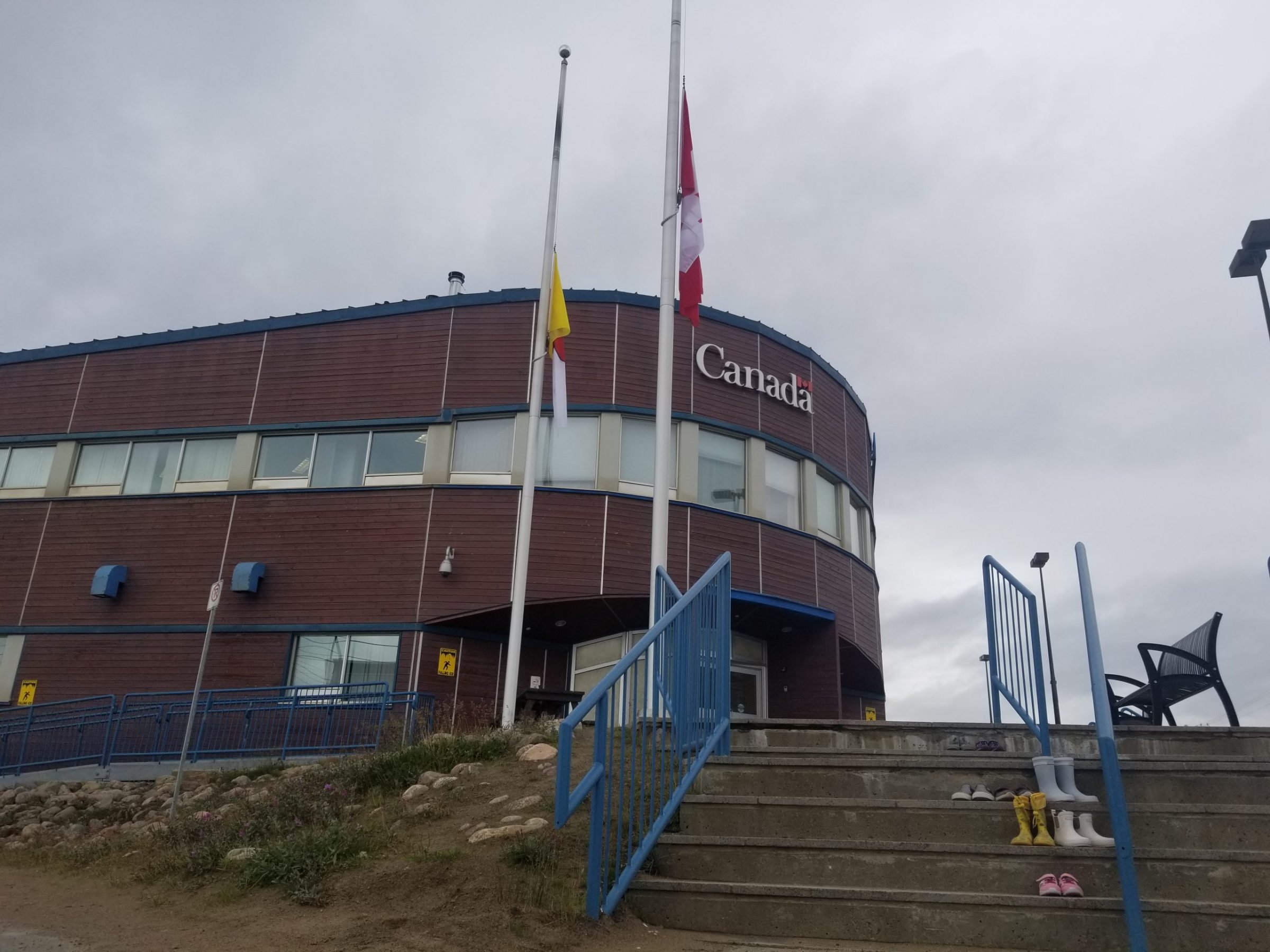 Flags on federal government buildings, including the Qimugjuk Building in Iqaluit, continue to flag at half-mast. They were lowered in May to honour Indigenous children who died at residential schools, following the identification of unmarked graves in Kamloops, B.C., in May. (Photo by David Venn)

Flags on federal government property should remain at half-mast to honour Indigenous children who died at residential schools, but much more needs to be done for reconciliation, say Nunavut’s candidates for the Sept. 20 federal election.

The Canadian government has kept flags on federal buildings lowered since May, after the Tk’emlúps te Secwépemc First Nation said it identified the remains of 215 children in unmarked graves at the former Kamloops Indian Residential School. Similar announcements soon followed from other First Nations about graves at other former residential school sites. The federal government hasn’t indicated when it will raise its flags.

Conservative candidate Laura MacKenzie said many Inuit don’t understand the symbolism behind flags being placed at half-mast because it’s a western tradition and there aren’t federal buildings in some of Nunavut’s smaller communities.

“People need to be aware: what is half-mast?” she said. “That’s a federal government type of thing that was brought up north.”

MacKenzie says real action needs to happen, such as having more Inuktitut-speaking counsellors who are trained in trauma therapy, as well as better health care, safe spaces and transitional housing, and that she is prepared to work with the Conservatives on reconciliation if elected.

Liberal candidate Pat Angnakak said the Liberals have “addressed some of the concerns” but that “we have to go a bit further.”

“[Lowering the flags to half-mast is] a sign of respect,” she said. “And I think Prime Minister Trudeau making that decision, means to me, that he’s taken seriously the death of children at residential schools.”

NDP candidate Lori Idlout said she agrees that the flags on federal property should continue to be at half-mast.

“As an Inuk, I’ve felt the impacts of intergenerational trauma, I’ve seen it among my friends, among other Inuit, and I know how serious and difficult it is to go through a healing process with the residential school experiences.”

Idlout, who is currently campaigning in her hometown of Igloolik, said, if elected, she will be an advocate for “finding ways to deal with intergenerational trauma so that we have more Indigenous Canadians that are proud of their heritage, proud of their strength as Indigenous people.”

The Government of Nunavut lowered its flags to half-mast on May 30 for 215 hours — one hour for the remains of each child discovered at the Kamloops Indian Residential School. Its flags were then raised.

“The initial gesture was done to stand in solidarity with our Indigenous communities,” wrote Cate Macleod, Nunavut Premier Joe Savikataaq Savikataaq’s press secretary, in an email. “We hope the flags at federal buildings [will] remain at half-mast as we continue to recover children at former residential school sites.”

Anyone in distress can contact the 24-hour Residential School Crisis Line at 1-866-925-4419 for emotional support and crisis referral if needed.