Nunavut education at a crossroads: reflections on Bill 25

“For 10 years, the Nunavut government has been indifferent to the goal of a fully bilingual education system” 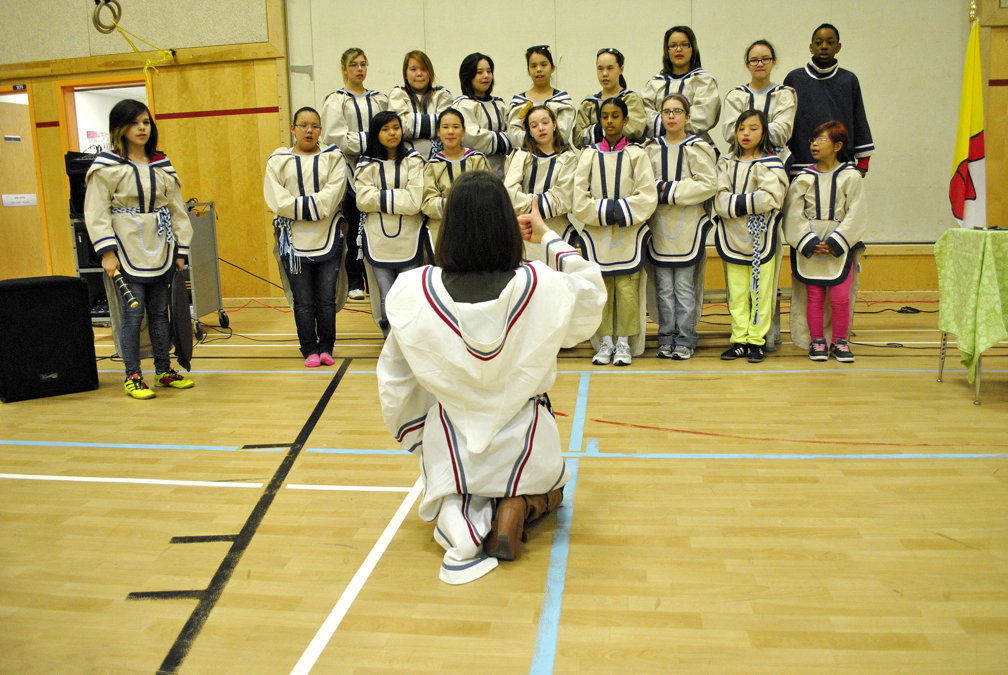 Children at the Aqsarniit Middle School in Iqaluit get ready to start a vocal performance during Education Week activities in 2012. In this opinion piece, Ian Martin says the Nunavut government has been indifferent to the goal of creating a fully bilingual education system. (File photo)

The year 2019 is the United Nations Year of Indigenous Languages. Many governments are passing laws and investing funds to strengthen, revitalize, promote and teach Indigenous languages.

In Canada, the federal government has recognized that Indigenous constitutional rights include language rights. In much of the world, Indigenous languages are being recognized as valuable.

It has turned its back on the main reason for the Nunavut territory: ensuring that the public government reflect Inuit ways of understanding and being.

Three times in the last 10 years, the government has had an opportunity to create bilingual education and implement Inuit language rights, and three times it has declined to do so.

Instead of reinvigorating a Nunavut Teacher Education Program capable of accrediting Inuit to become teachers, the Department of Education has chosen to staff Nunavut schools with high-turnover teachers from southern Canada.

The result: 75 per cent of the teachers don’t speak the Inuit language—certainly not the intention of the founders of Nunavut.

In 2008, the government committed itself to a bilingual education system in which Inuit would be taught principally in Inuktut from kindergarten through Grade 12 by July 2019. This was an important goal: to produce fluently bilingual graduates to staff the public service, for which a cohort of bilingual Inuit educators are needed.

The department was aware of the need to train bilingual Inuit teachers to teach in Inuktut. In 2005, it commissioned the 2006-2016 Qalattuq Strategy, a solid plan to invest in Inuit educators.

It is wrong to say, as Jim Bell has recently claimed, that the 2008 Education Act, with its July 2019 goal was “dead on arrival.” It wasn’t dead, it was politically killed.

The method of killing was the removal from the bill of the implementation schedule — this meant that there was no annual report on progress, and no follow-up on the Qalattuq Strategy, or requirements for NTEP to set up a plan to train Inuit teachers to teach in Inuktut.

All this set the department on a path toward non-compliance with its own legislation, which continues today.

In 2017, the government introduced Bill 37, postponing for 10 years the roll-out of bilingual education from Grade 4 to Grade 9 until 2029.

They offered no action plan to meet this goal, and no commitment to Inuktut in Grade 10 to Grade 12, despite the fact that future NTEP candidates would need to be high school graduates.

There was no plan to train Inuit educators to use Inuktut as a language of instruction throughout the grades, reflecting a deeply-held colonial prejudice alive and well throughout the department: that Inuktut is incapable of expressing ideas at the level of high school complexity. This prejudice has no place in today’s Nunavut.

The effect of all this is that Inuit high school students continue to receive exclusively English, not Inuktut, instruction in high school, with one result being that future teachers are not achieving the Inuktut proficiency needed to use Inuktut as a language of instruction at upper levels.

Bill 37 was met with opposition from all who support bilingual education, from Inuit parents and students, district education authorities, expert educators, and ultimately Nunavut’s legislators.
The defeat of Bill 37 — and I hope, the defeat of its avatar Bill 25 — served to raise awareness of the importance of Inuktut, and contained a message to the government to put in place a robust plan to recruit more Inuit into teaching and support them to teach in Inuktut and English at all grade levels and in all subjects.

The new administration chose instead to introduce Bill 25, which is very similar to Bill 37. But where Bill 25 is far worse than Bill 37 is that it effectively reduces Inuktut instruction to a language arts course or program.

Inuktut language-of-instruction timelines for all other courses are left to be set in the future, maybe. Of course, by 2039, many fluent Inuktut speakers will have passed on. It is killing a language by neglect.

Like its predecessors, Bill 25 comes with no plan even to reach the distant goal of 2039, no schedule for bilingual education upward through the grades, no commitment to 85 per cent Inuit employment in the education system, and no staffing plan other than a continuing infusion of 75 per cent of the territory’s teachers from the south.

If current Inuit teacher retirement trends continue, the system will be completely staffed by English-speaking teachers by 2026.

Lack of funding is not the problem – in the 2017-18 fiscal year, the department underspent its budget by some $39 million or 12.5 per cent, which could have been directed toward Inuit teacher training.

Nunavut Arctic College recently signed an agreement with Memorial University to offer joint credential degree programs, including NTEP. It is to be hoped that Memorial’s Indigenous education expertise will ensure NTEP can deliver, and that the much-needed transformation of that institution’s culture can finally begin.

It is, of course, sad that 2019, the UN Year of Indigenous Languages, is not the year in which the first class of bilingual students proudly graduated, as the 2008 bill intended.

But 2019 could be the year in which the GN, with the assistance of a major southern university committed to decolonizing education, begins a process of decolonizing the education system and NTEP.

Defeating Bill 25, from this perspective, is a necessity. But the important question isn’t about legislation, it’s about embracing change toward one of the main reasons for Nunavut: the flourishing of the Inuktut language and Inuit culture.

If such a transformation were to begin in 2019, it would be the most worthy way imaginable to celebrate the Year of Indigenous Languages, not only in Nunavut, but in all of Canada.

Ian Martin is an associate professor of English at Toronto’s Glendon College with a long involvement in Nunavut language issues, having worked as a consultant for Nunavut Tunngavik Inc., the Kitikmeot Inuit Association and the Government of Nunavut.