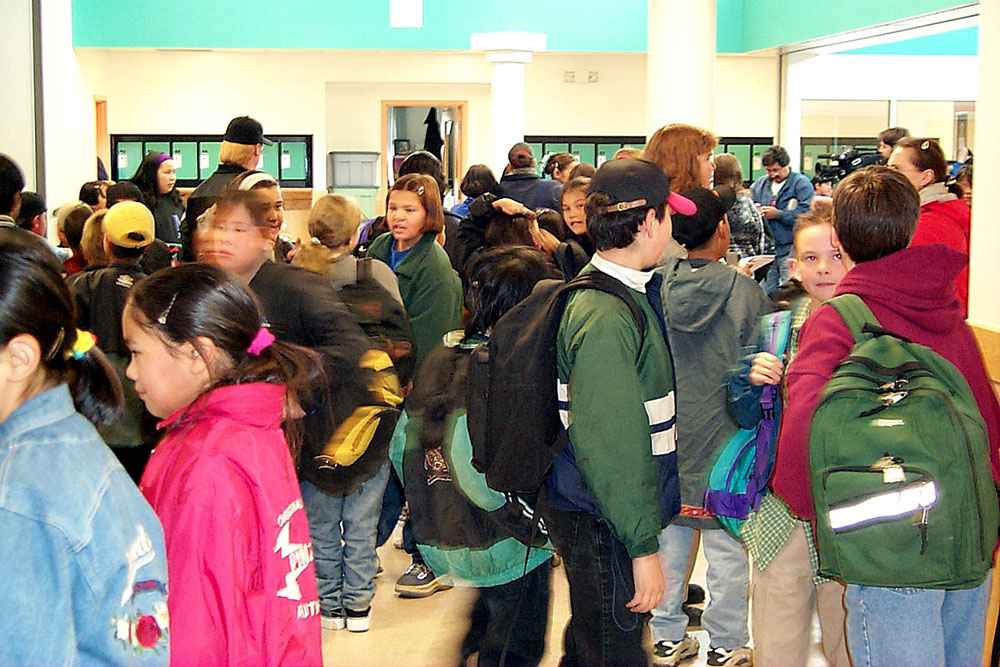 Opening day at Aqsarniit Middle School in Iqaluit more than 10 years ago. This week the Nunavut government will table its latest attempt to amend the Education Act and the Inuit Language Protection Act. (File photo)

The Government of Nunavut will likely introduce Bill 25 in the legislative assembly this week.

The bill will most probably resemble the GN’s last attempt to change the Education Act and the Inuit Language Protection Act. That one fizzled in the spring of 2017, when, after large expenditures of time, energy and money, regular MLAs simply refused to debate the GN’s proposals.

Will the second attempt succeed? Maybe, maybe not. But you know what? Set against the biggest issue the GN faces in education, it may not even matter.

That’s because the Department of Education’s biggest problem right now has nothing to do with legislation. Its biggest problem is a human resource issue and a training issue. To some extent, it’s also a budget issue.

That is the long-standing shortage of Inuit-language teachers in Nunavut, coupled with continuing uncertainty about the health of the Nunavut Arctic College program that is supposed to train such teachers: the Nunavut Teacher Education Program.

In simple terms, it’s a people problem. And until that people problem is addressed, it won’t matter what either the Education Act or the Inuit Language Protection Act end up saying about education in the Inuit language.

The current version of the Education Act, which came into effect in 2008, contained a schedule for introducing bilingual English-Inuktut instruction by 2019, from kindergarten to Grade 12, in all Nunavut schools.

Those language of instruction measures were dead on arrival. For those who hadn’t already figured this out for themselves, the Auditor General of Canada’s 2013 report providing damning confirmation.

The main reason for this failure, of course, is that the Department of Education is not even close to being able to employ sufficient numbers of Inuit-language teachers. The leads to a self-perpetuating downward spiral.

One reason for that, of course, is that the Nunavut Teacher Education Program does not produce enough fully bilingual graduates to meet the Department of Education’s needs.

The incapacities of NTEP are no secret. As far back as 2012, some MLAs and mayors were complaining that some of its graduates were not qualified for teaching jobs, while some who were able to get jobs were quitting or getting dismissed.

A few years later, in early 2017, Paul Quassa, then the minister of education, said some graduates of NTEP prefer to teach in English. For that, and other reasons, he promised the GN would do a “review” of NTEP.

So what did that review say? We don’t know. In March of 2017, the GN hired a firm to do that review of NTEP. Quassa, still serving as minister, promised the work would be done by June of that year.

But if the NTEP review report has indeed been completed, the GN has not made it public. We’re still waiting for it. Significantly, few, if any MLAs have bothered to ask about it.

Meanwhile, the current minister of education, David Joanasie, bragged last November that a record number of people are enrolled this year in the NTEP program: 93 people, 90 of whom are Nunavut Inuit. They’re scattered around nine communities and studying at various levels, with 23 expected to graduate this year.

On the surface that looks like a mildly encouraging development. But no one knows how many of those participants will make it to the end.

And of those who graduate, no one knows how many will stay in the teaching profession. The employment rolls of multiple Inuit organizations and government departments are filled with the names of former Inuit teachers who were educated at the government’s expense and then moved on to other jobs.

According to a spreadsheet that Nunavut Tunngavik Inc. helpfully included in its recent research paper, titled “Is Nunavut education criminally inadequate?” the current Nunavut teacher employment numbers are rather less than encouraging.

Don’t forget: the NTEP program is designed to train people capable of teaching up to about Grade 6 only. For Grade 7 to Grade 12, there isn’t and never has been any identifiable program or strategy set up to train people who are able to use Inuktut as a language of instruction in those grades.

No such program existed in 2008, when MLAs passed an Education Act that said “bilingual education” for those grades was to have been phased in between 2016-17 and 2019-20. Those who believed in that possibility were either lying to themselves and to the public, or they were seriously deluded, or they just didn’t care.

That’s why we said earlier that the 2008 act was dead on arrival. It contained unrealistic provisions that were impossible to implement.

So it’s understandable that leaders with organizations such as Nunavut Tunngavik Inc., and many other observers, are enraged by the GN’s failures.

“Inuit children receive the majority of their education in the dominant languages instead of their mother tongue. This constitutes cultural genocide,” Aluki Kotierk, the president of NTI, said last month in a statement.

But at the same time, members of the Nunavut legislature can’t afford to indulge in another exercise in unreality. As in 2017, they will be presented with a bill in which a schedule for introducing Inuktut as a language of instruction is tied to the GN’s capacity to offer it.

“Timelines for implementation would be tied to targets outlined in the Department of Education’s Inuit Employment Plan,” the GN said in a recent information brochure.

In other words, it will occur when the Department of Education solves its people problem.

This is a difficult, complex subject and this 1,000-word editorial barely scratches its surface. But this time around, MLAs would be well-advised to hold their noses and vote in favour of Bill 25.

And while they’re at it, they might also want to think about asking a question or two on that review of NTEP. JB