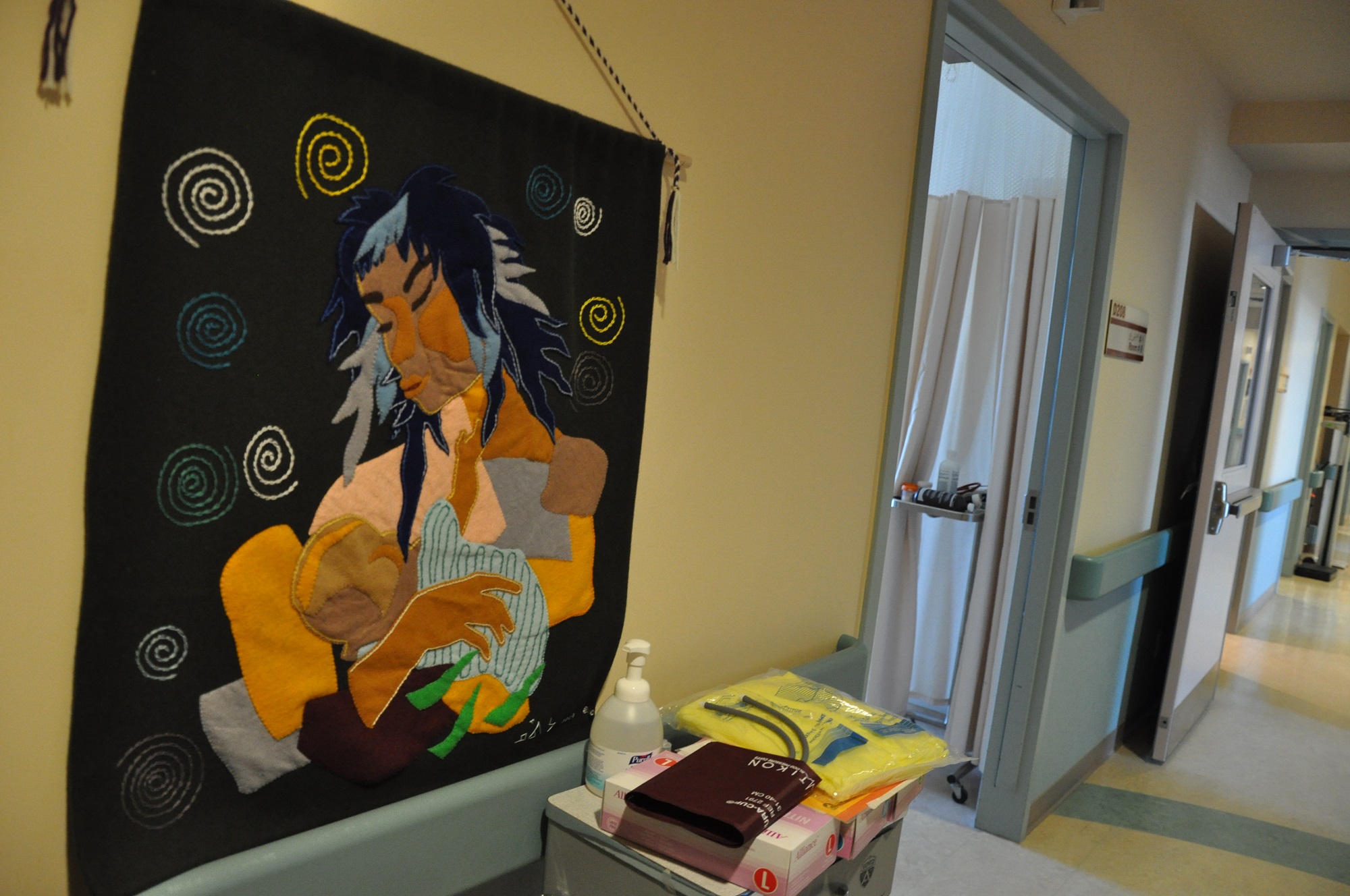 A wall hanging decorates the hallway outside the birthing room at the Kivalliq Health Centre in Rankin Inlet, where full services haven’t been offered since two Inuit midwives quit in August. (File photo by Sarah Rogers)

Nunavut’s health minister, Lorne Kusugak, says he has spoken with two Inuit midwives who say they quit their jobs because they experienced racism at the Rankin Inlet birthing centre.

He told the legislature about the conversation on Tuesday.

“We want to see all of the particular details,” he said. “And move forward so this does not happen to them or anybody else again.”

The two former midwives recently told the Canadian Press they quit their jobs after years of mistreatment. Their departure resulted in the suspension of birthing services at the Rankin Inlet birthing centre last summer.

Mike Courtney, Kusugak’s executive assistant, confirmed the call happened in February. He said the minister has been adamant he wants the Rankin Inlet birthing services resumed, but not the way it was run before.

He said Kusugak wanted to hear the women’s concerns firsthand since they quit before he took over the health portfolio, on Nov. 9, 2020.

Cathy Towtongie, the member representing Rankin Inlet North-Chesterfield Inlet, asked the minister whether he would commit to reviewing allegations of racism when it is occurring, and not after the fact, in the legislature on Tuesday.

Kusugak said the Nunavut government has a zero-tolerance policy for harassment and complaints can be made anonymously.

“If anybody feels they are not [treated fairly] or that they are made to feel they are at a disadvantage, I am more than happy to take their call and concerns,” he said.

Kusugak said one of his first priorities after taking the health portfolio was to deal with the issues at the Rankin Inlet birthing centre.

Without offering up a concrete plan, Kusugak has reiterated over the past week in the legislature that bringing midwifery services back to Nunavut is a priority.

“We are in the planning stages and are identifying what is needed … to move midwifery forward properly,” he said.

Kusugak has also stated a goal to bring midwifery back to all three regions of Nunavut, but has not given a timeline for that goal.

The midwifery program was also dropped from Nunavut Arctic College in 2014.

On Monday, Amittuq MLA Joelie Kaernerk asked whether midwifery programming will return to the college.

Kusugak said there weren’t enough people applying and the program is too expensive to offer to one or two people, but his department is looking at partnering with training organizations to design a proper course and Nunavut Arctic College would be included in this conversation.

In 2019, the territorial government vowed to build up midwifery in the territory. In August 2020, the National Aboriginal Council of Midwives told Nunatsiaq News midwives and birthing centres in Nunavut needed better support and more funding to be sustainable.

The final report of the National Inquiry into Missing and Murdered Indigenous Women and Girls recommended improved midwifery services by and for Inuit, when released in 2019.