Nunavut impact board takes down signs that deride Baffinland 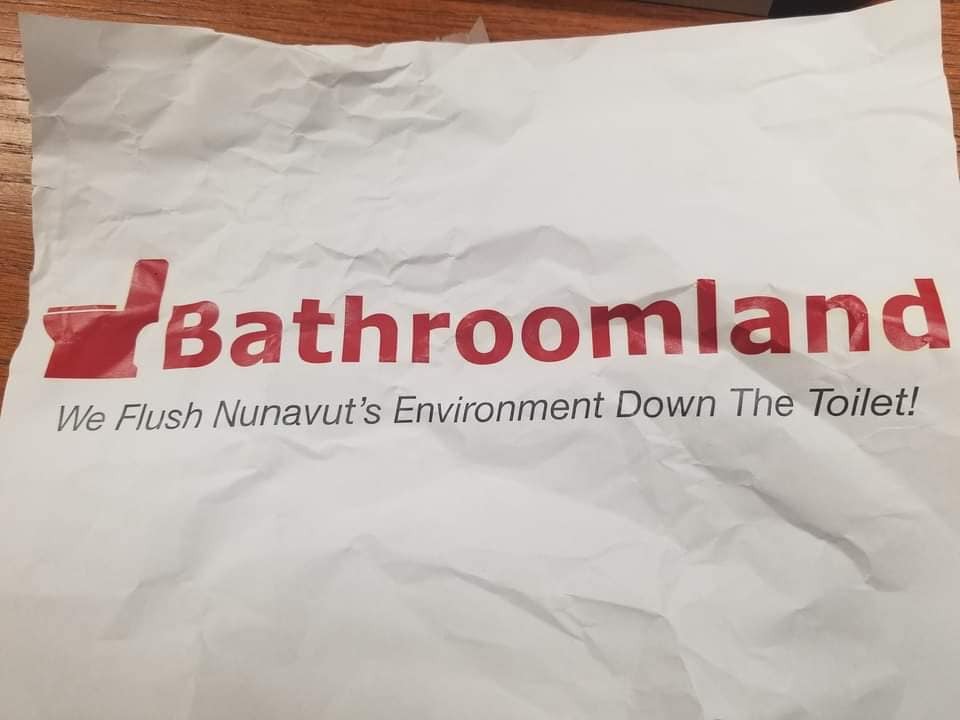 Signs deriding Baffinland Iron Mines Corp. were posted around Pond Inlet during the Nunavut Impact Review Board’s hearing on the company’s proposed mine expansion. This one was found on the outside of the Government of Nunavut building. (Photo courtesy of Cara Killiktee/Facebook)

Signs that mock Baffinland Iron Mines Corp. have been taken down from the Pond Inlet community hall, where hearings on the company’s expansion plans are underway.

“Bathroomland: We Flush Nunavut’s Environment Down The Toilet!” reads one sign.

“Several” such signs were posted inside and outside the venue hosting the Nunavut Impact Review Board’s final hearing on the company’s expansion plans, according to the board’s chair.

“While the board understands the feelings are running high, and that parties have a right to free expression, attempts to create an atmosphere of intimidation within these proceedings is not acceptable,” Marjorie Kaviq Kaluraq said.

She said the signs will be taken down immediately if they are found again.

Baffinland said it supports the board’s “efforts to ensure this process is completed expeditiously and with fairness to all parties.”

Pond Inlet Mayor Joshua Arreak said he hasn’t seen the postings and was surprised to hear of them.

“This is really not the way to be dealing with controversies,” he said.

Representatives from North Baffin hamlets and hunters and trappers organizations continue to express concerns about the environmental impact of the mine expansion plans.

The hearing, which started Jan. 25 and runs to Feb. 6, will reconvene sometime in March to allow affected groups a chance to continue raising questions.

When the hearing is completed, the three-member panel will send its recommendation to the federal minister of northern affairs, Dan Vandal, who will either approve or reject the proposal.