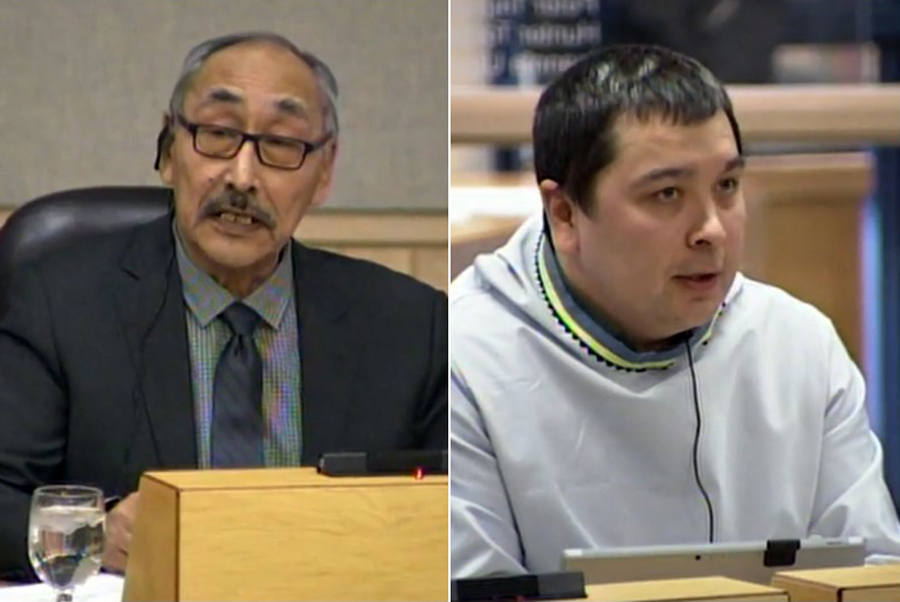 Bill 20 passed on Tuesday, March 12, but received opposition from one member—Aggu MLA Paul Quassa, left, who voted against. Education Minister David Joanasie, right, said he will table new amendments to the Education Act in the spring. (File photos)

All but one Nunavut MLA voted to pass Bill 20 this week, effectively eliminating the Nunavut government’s legal responsibility to provide Inuit-language instruction from Grades 4 through 12 by a previously mandated summer 2019 deadline.

The Interim Language of Instruction Act was introduced last month to suspend a section of the Inuit Language Protection Act that would have guaranteed Inuktut-language instruction in Nunavut’s schools from kindergarten through Grade 12 by July 2019.

The bill was drafted to give the government more time to table its overhaul of the Education Act, expected later this year.

Bill 20 received its third reading on Tuesday afternoon, on the final day of the legislature’s winter sitting.

But it received opposition from one member—Aggu MLA Paul Quassa, who voted against it.

“If this bill is passed, it would mean to Nunavummiut that it’s okay that the government doesn’t provide instruction in Inuktitut,” Quassa said before the vote.

“[It sends the message that] the Nunavut government doesn’t necessarily have to teach Inuktitut. That’s the reason we established Nunavut.”

The legislation itself notes the challenge the Education Department faces, citing “insufficient numbers of certified teachers available to provide Inuit-language instruction in Grades 4 to 12.”

Quassa, a former premier and past education minister, acknowledged the lack of Inuktut-speaking educators in Nunavut, but said the territory has had a decade to plan for this.

As education minister, Quassa introduced amendments to the bill in 2017, which proposed postponing the introduction of Inuit-language instruction for all grade levels to 2030.

But that attempt failed when regular MLAs defeated the bill before it could even be debated.

In a legislative proposal obtained by Nunatsiaq News last spring, the GN shared concerns that it was at risk of non-compliance with its obligations under its education and language legislation, specifically its 2019 bilingual education deadline.

The GN said it feared litigation from Nunavut Tunngavik Inc. for violating those obligations, although NTI later said it had never made such a threat.

What the Inuit organization has proposed is using a $34-million fund won through a lawsuit to pay for educator and language specialist training to help the GN meet its Inuktut-language instruction goals.

Now, Education Minister David Joanasie has said the department has completed a new round of consultations on the Education Act and Inuit Language Protection Act and plans to introduce new amendments in the legislative assembly’s spring sitting at the end of May.