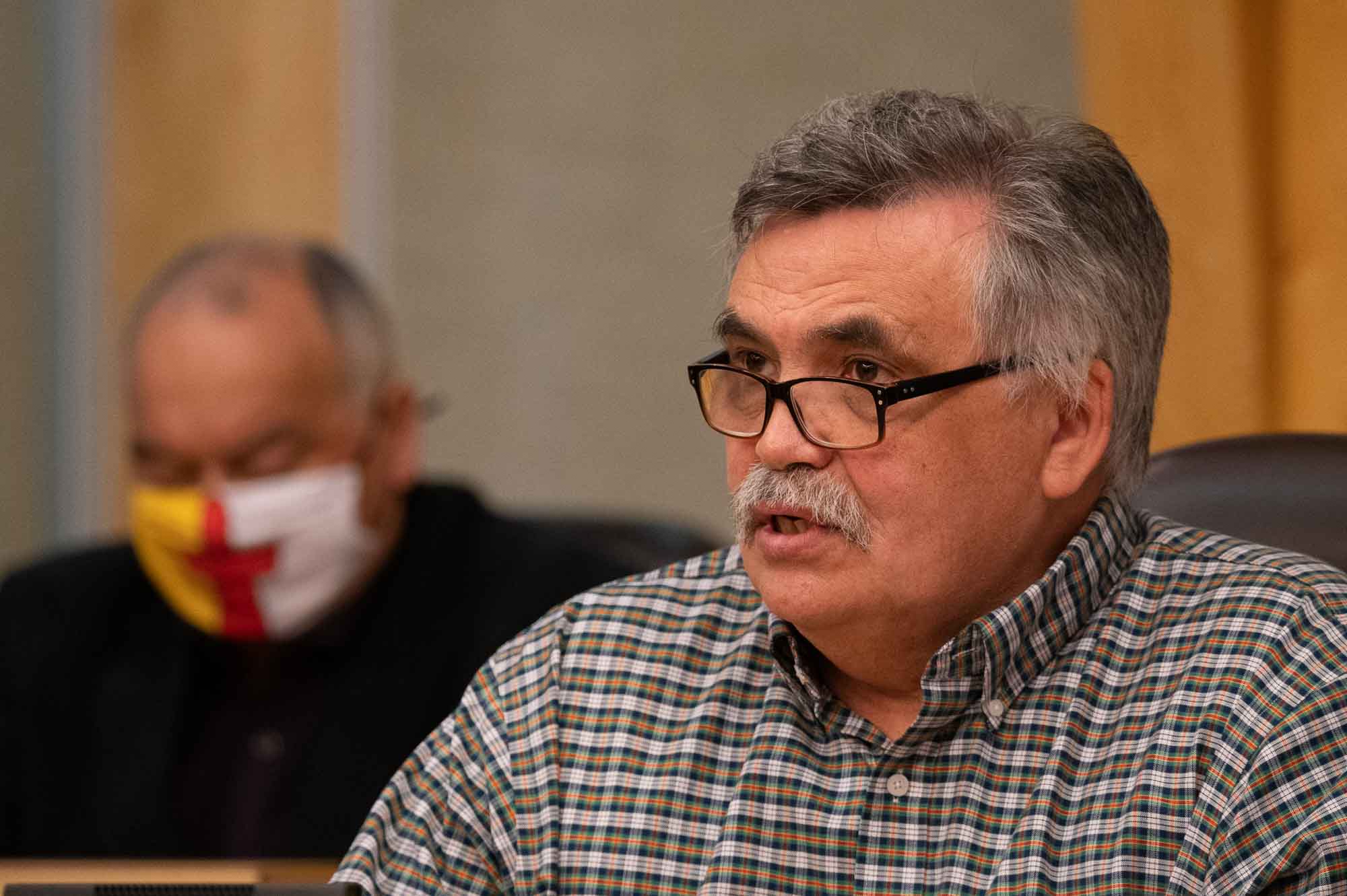 Health Minister Lorne Kusugak used Monday’s COVID-19 news conference to address rumors that two passengers on a Canadian North flight traveling from Iqaluit to Rankin Inlet on Friday were allowed to travel despite waiting for COVID test results. “The individuals who tested positive on Friday night in Rankin Inlet were not even identified as contacts until after their flight had departed,” said Kusugak. (Photo by Dustin Patar)

The COVID-19 outbreak in Iqaluit has now been linked to the U.K. variant of the SARS-CoV-2 virus.

Dr. Michael Patterson, Nunavut’s chief public health officer, made the announcement during a news conference on Monday morning after test results from southern labs were received over the weekend.

The U.K. variant, otherwise known as B117, may spread more easily than the general strain of the virus, said Patterson.

“That increased rate of transmission makes it even more important that people follow the current public health measures,” he said.

“Fortunately, our current restrictions are enough to control the spread of the variant if people take the restriction seriously.”

Research shows that the Moderna vaccine is effective against the variant, Patterson said.

As of Monday, only 21 test results from southern labs had been received by the government, but all indicated the same variant.

All positive test results of COVID-19 are being sent south for variant testing.

Monday’s announcement comes as Iqaluit recorded nine new cases and nine recoveries, bringing the total number of active cases to 42 in the capital city, among the 47 in the territory.

There are currently three active caes in Kinngait and two in Rankin Inlet.

Over the weekend, the Government of Nunavut made a plea for those who were at the Chartroom lounge on April 14 to get tested for COVID.

Patterson said that roughly 20 per cent of all positive COVID-19 cases in Iqaluit originated from that night, and “it fits the description of a super-spreader event.”

The Chartroom had held a karaoke night on April 14, which Patterson said is “almost certainly a factor” in the spread. “Singing has been associated with other super-spreader events,” he said.

In addition to the territory-wide restrictions placed on restaurants and bars last week, Patterson also said that’s why karaoke and singing in those establishments have also been banned for the time being.

Meanwhile, Patterson said the other 80 per cent of cases come from public sites, workplaces and household or private get-togethers.

In addition to the Storehouse and Chartroom, Patterson had also previously identified Canadian North as a workplace of possible exposure and on Monday he indicated that more than half of the cases identified in the second half of last week were linked to the airline.

“There is no truth to the rumours that these people left Iqaluit waiting for their COVID test results,” said Kusugak.

“The individuals who tested positive on Friday night in Rankin Inlet were not even identified as contacts until after their flight had departed.”

Instead, both Kusugak and Patterson pointed to fast and effective contact tracing and public health teams as the reasons why these cases were isolated, tested and confirmed so quickly.

Canadian North has shared the passenger manifest with contact tracing teams and all individuals sitting nearby the infected passengers have been contacted, Patterson said, adding that there has not been a confirmed case of transmission on domestic flights in Canada.

Despite this, all travellers leaving Iqaluit must continue to isolate themselves for two weeks once at a destination within Nunavut.

“All intra-territorial, non-essential travel in and out of Iqaluit is prohibited or restricted with few exceptions,” he said.

“If you are not a medical traveller, an essential worker or returning to the community you live in, you should not be travelling and could be fined under the [public health] orders if you do.”

Although the origin of Iqaluit’s COVID-19 outbreak is still unknown, Patterson now says that COVID was definitely circulating in the City of Iqaluit before April 10 but at this point, it can’t reliably be traced back further than that.

As of Monday morning, there remained one individual for whom contact tracing teams do not yet have a link, but Patterson stopped short of calling this single case community transmission.

Patterson also said that health teams are in the process of offering surveillance testing to certain groups and facilities including taxi drivers, men’s shelters, the elders centre, staff at the boarding home and hospital and some correctional facilities.

To date, there have been 836 tests conducted in Iqaluit and 103 in Kinngait.

Since the outbreak began, Patterson said that more than 800 residents have contacted the hotline.

COVID-19 updates will continue this week on Wednesday and Friday at 11 a.m. eastern time.