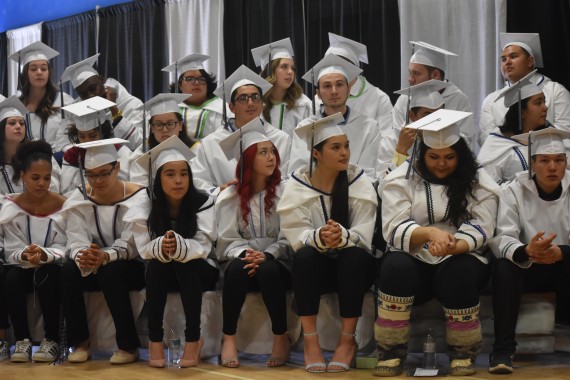 The class of 2018 at Inuksuk High School in Iqaluit is seen here. The federal government has launched a task force to look at how to improve outcomes in post-secondary education across the North. (File photo)

Three Nunavummiut will sit on a new task force the federal government launched this month to look at how to improve post-secondary education across the North.

The initiative was one of the pledges outlined in the government’s Arctic and Northern Policy Framework. Specifically, the framework aims to close the gaps in education outcomes between northern and southern Canadians, and to provide learning and skills development opportunities for Northern students, including Indigenous knowledge.

A group of 13 leaders and education experts have been appointed to the task force. The group has $1 million and several months to draft recommendations on how to improve education outcomes across the North.

Task force members were nominated by northern governments and Indigenous organizations. Its Nunavut-based members are the following:

The other task force members are the following:

No representatives were appointed from Nunavik.

The Task Force on Northern Post-Secondary Education is expected to deliver a first draft of its recommendations by the end of the winter.

“When more Canadians are able to continue their education, practise new skills, or learn on the job, they are better prepared to find and keep good jobs now, and in the future,” said Northern Affairs Minister Dan Vandal.

“When we look beyond the COVID-19 pandemic, the recommendations of this task force will be critical in shaping that recovery.”