“For basically the past 30 years, it’s always been talked about” 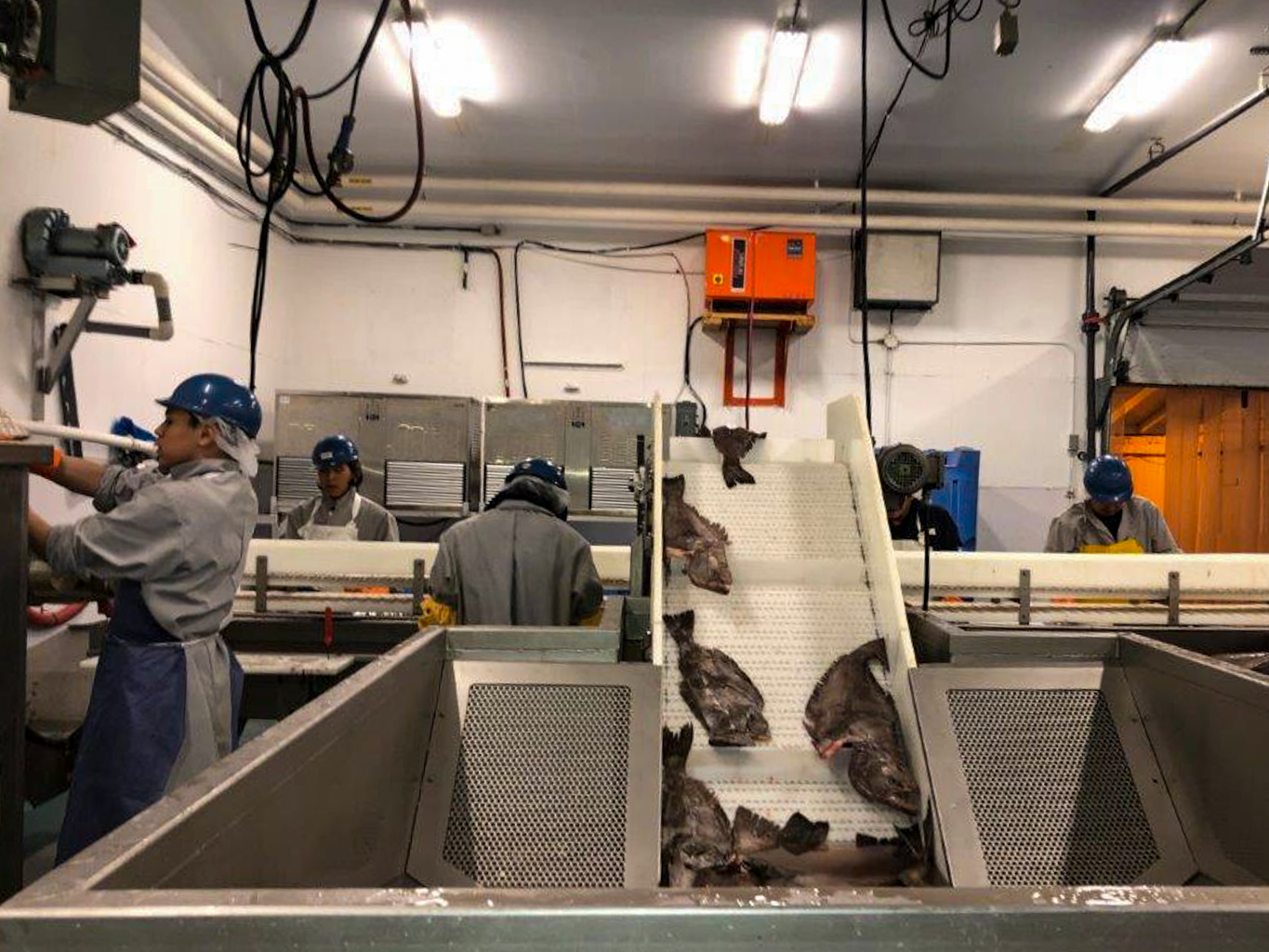 When the Black Eagle, a 61-foot-long fishing boat from Newfoundland, pulled up to the dock in Pangnirtung at around 4 a.m. on a cold and rainy Saturday earlier this month, it was the realization of an idea that had been decades in the making.

For the first time ever, Pangnirtung was going to process a summer season of turbot, otherwise known as Greenland halibut.

“For basically the past 30 years, it’s always been talked about but never really pursued,” said Keaton Guy, production manager for Pangnirtung Fisheries Ltd.

In the past, Pangnirtung’s fish plant only processed turbot caught in the winter by local fishermen often using nets and long lines strung under the sea ice.

“The plant is quite successful in the winter, they harvest a million pounds of turbot through the ice, so that’s a great story for Nunavut,” said Chris Flanagan, CEO of Baffin Fisheries.

“[But] you’ve got this great asset that’s not used the rest of the year.”

During previous summer seasons, Cumberland Sound Fisheries, which operates in partnership with Pangnirtung Fisheries and owns the offshore turbot quota for the region, would sell their allocation to Baffin Fisheries who would then do the harvesting and land the catch in Newfoundland.

While this arrangement brought money into the community and the company, all three fisheries companies wanted to do more.

“We wanted to create some jobs for the community,” said Guy.

“So through working pretty much all winter … we decided to give it a go-ahead and bring the first boat into Pangnirtung and see what we could do.”

Ten hours after the Black Eagle had arrived in Pangnirtung on Aug. 8, nearly 100,000 pounds of turbot had been off-loaded.

According to Flanagan it was supposed to have been the first of four such landings, which in total would have seen the Pangnirtung plant process upwards of 300,000 pounds of summer turbot.

But that won’t be happening.

The second landing, which was originally slated to be ten days later, was diverted to Newfoundland.

“Between storage space and production capacity, we couldn’t handle any more,” said Guy.

In the winter, when the plant is running at full capacity, Guy said they can get through between 20,000 and 25,000 pounds a day.

But with the current staffing levels, the plant is only capable of around half of that, 10,000 pounds a day, said Guy. Of the 30 positions open, on average, only 10 are filled.

“Consistent staffing is a big issue for us,” he said.

“It’s tough to get people in here working inside of a building when it’s so nice out.”

“We’ll have to come up with an alternative solution to try to get some workers in here,” he said.

The third and fourth landings are also likely not to occur in Pangnirtung.

Despite the abbreviated season, Guy views it as a success.

“Considering this was the first run, we didn’t really know what to expect,” he said.

“Now that we’ve seen it in action, we can do a lot of things to make it a lot faster.”

Flanagan sees it the same way. “It’s a learning experience,” he said.

The other trial run this season is how the fish will be shipped south.

Typically that happens via air cargo. The processed turbot are flown to Montreal and then to Halifax before being shipped to Chinese and other international markets where the oily fish is a popular choice for consumers.

“It gets very pricey when we’re doing that over the long term,” said Guy.

This year, to try and change that, Baffin Fisheries purchased two refrigerated containers, shipped them to Pangnirtung and made arrangements for them to be brought back full on one of the last sealifts of the season.

“This is the first attempt at bringing the fish out by sea container, which will significantly reduce shipping costs and make it profitable,” said Flanagan.

“When we harvest turbot on the vessel and we land the vessel in Newfoundland, the cost to ship it to China is pennies per pound.”

According to Flanagan, the cost to fly the turbot from Pangnirtung just to Montreal is around a dollar a pound.

“It’s a huge, huge cost,” he said. “That’s why to us, this new approach of sailing by sealift is a really great test.”

“If it’s feasible and if it works well, we’ll look into building a storage facility down there by the docks that we can store all of our fish from the year and wait until the sealift and ship it all out at once,” said Guy.

“A lot of uncertainty”

Other future plans for the summer Pangnirtung fishery, like the possible leasing of a dedicated vessel to pick up the processed fish or the purchase of a dedicated fishing boat, will similarly depend on the outcome of a post-season review of the summer fishery.

But aside from the abbreviated season, another factor has hampered what the fisheries were able to try out this season: the pandemic.

“We were also hoping to have a number of Inuit workers from Pangnirtung on this boat [the Black Eagle], but with COVID-19 we’re not allowed to mix crews. The crew are not allowed to set foot on shore and you have to go all or nothing,” said Flanagan.

The pandemic has also had a global impact on the market for turbot in general.

“Unfortunately, prices are dropping and there’s a lot of uncertainty,” said Flanagan.

“They’re not fully recovered, plus, they’re using COVID as a reason to drive down the prices given they’re such a big buyer,” he said.

Nevertheless, the price drop isn’t something that will be factored into the post-season review, said Flanagan.

“We believe the price drop is 100 per cent caused by COVID and so we’ll look at last year’s numbers and use that as more of a baseline for future decisions.”

While the pandemic has been a bust for certain aspects of the turbot fishery, in other ways it may be a boon.

Last week Flanagan received a notice from the Canadian Food Inspection Agency notifying him of a new COVID-19 precaution implemented by China.

“If an employee in the factory, or anyone on a vessel, gets COVID-19, China will ban imports of all products from that company,” said Flanagan.

“Which makes Nunavut quite attractive because there’s no COVID.”

“What I want to see work”

Precautions to avoid the spread of the virus initially meant that the small test fisheries in Pond Inlet and Clyde River would continue with strict safety protocols, but eventually led to an early end to the season.

“There was so much uncertainty, we just had to say, we’re not gonna be able to make this work,” said Flanagan.

Instead, Baffin Fisheries purchased the turbot from the fishermen—2,000 pounds in Clyde River and 2,600 pounds in Pond Inlet—and donated it to the communities.

Despite these setbacks, Flanagan remains committed.

“The inshore fishery is a smaller scale, but for me, it’s absolutely what I want to see work,” he said.

“They have great potential to provide really meaningful jobs for people in those communities, jobs that really match the lifestyle of the people and the skills of the people who live there.”

According to Flanagan, Baffin Fisheries leverage the profits they make from their offshore fisheries to help fund the development of these sorts of inshore fisheries.

“We’ve already sent up lots of infrastructure like gas-powered haulers, qamutik material, nets and packaging materials, and helped build freezers and laid the groundwork for this to get going,” he said.

“It’s early days, but I’m really optimistic that this inshore fisheries development is just going to grow and grow every year in Nunavut.”