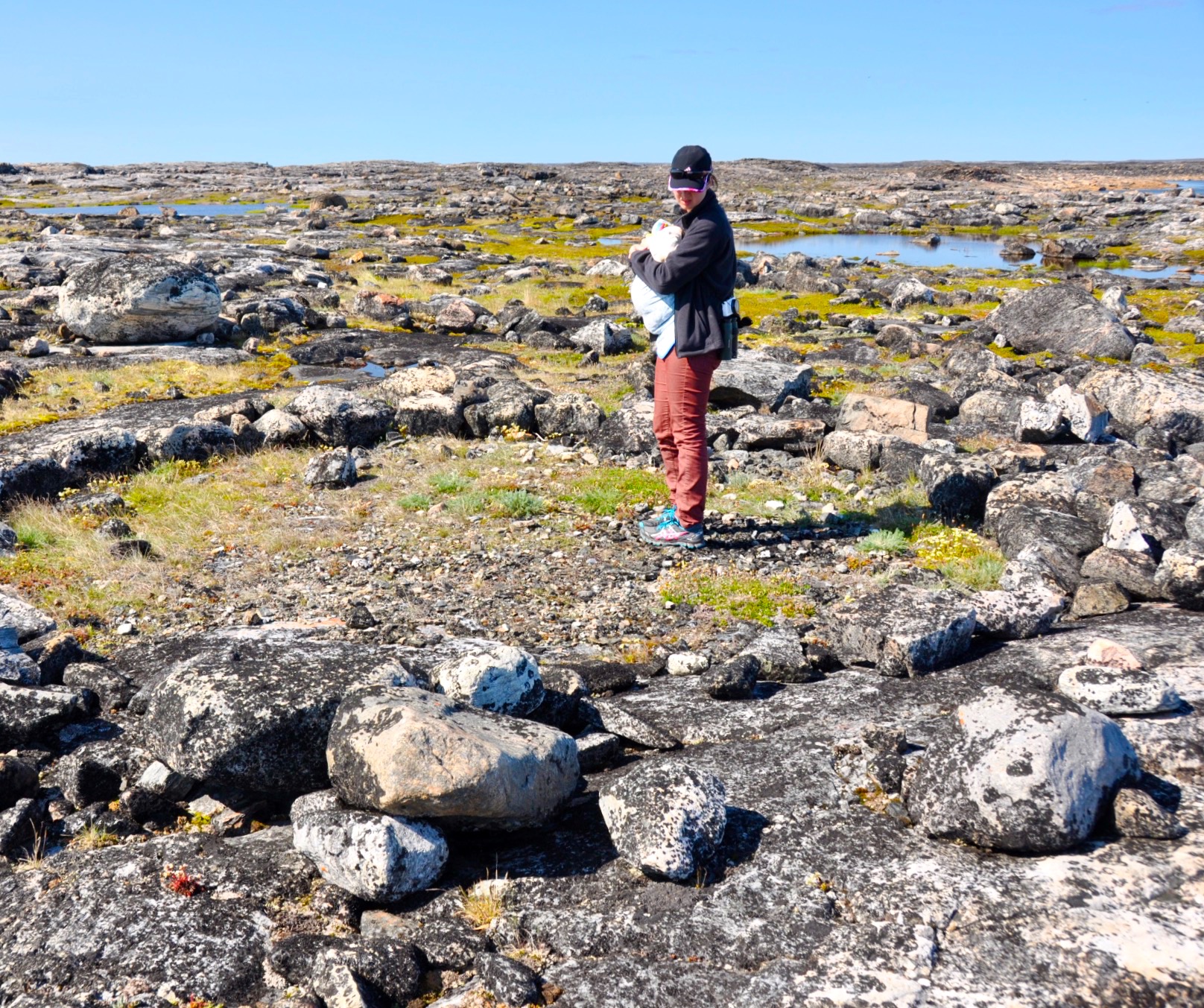 Krista Ulujuk Zawadski stands with her daughter at Qatiktalik, where she plans to focus her PhD research on the whaling that once took place there. (Photo courtesy of Krista Zawadski)

For Krista Ulujuk Zawadski of Rankin Inlet, this summer couldn’t come quickly enough, because she is eager to return to Qatiktalik or Cape Fullerton to continue her research there.

Qatiktalik was a wintering station for American and Scottish whaling ships and a trading point between Inuit and southern whalers during the 1900s.

Located about 100 kilometres northeast of Chesterfield Inlet, where Zawadski grew up, today it is part of Ukkusiksalik National Park.

Zawadski said she plans to reach out to Inuit in the area, to hear their oral history traditions about Qatiktalik, what these mean to them and how they ties in with their genealogy and kinship.

“So it’s really anthropological in that sense,” she said.

Zawadski said she knows she isn’t the first to look at the history of whalers there: Dorothy Harley Eber wrote “When the whalers were up north” in 1989.

“But what’s different is that I am an Inuk. I am from here. I know the place very well,” Zawadski said. “I was just there a month ago and I’ll be there next month. It’s a big part of my family and my personal life and my children’s life.”

Zawadski’s parents’ cabin is located near the site. She said that her personal connection to the area, and her identity as an Inuk, means she will bring a different lens to this history.

Recently, Zawadski got the good news she has been waiting for, since the beginning of the COVID-19 pandemic: her research licence was approved, as was her ethics licence, so she can start her research.

Zawadski also learned she had been selected for a $10,000 Polar Northern Resident Scholarship from the Association of Canadian Universities for Northern Studies.

“Presenting this year’s winners comes at an unsettling time due to the COVID-19 pandemic. With travel bans and research plans cancelled for the summer, our award recipients face unprecedented challenges,” the association said in a news release. “[The] scholarships program offers some hope and security during this time of uncertainty.”

Zawadski is midway through her five-year PhD program at Carleton University, where she is enrolled in an interdisciplinary program, combining art history and anthropology.

And she can now plan to spend her summer preparing for an exam concerning her proposed research, which is another step ahead towards her doctorate.

But to get there, Zawadski said she must read about 50 books and articles, and then develop the proposal.

Zawadski brings a strong academic background to her research. A graduate of Nunavut Sivuniksavut, she has been in post-secondary studies for 14 years, for her bachelor’s degree at Carleton, then for her master’s degree at the University of British Columbia in anthropology, and now back at Carleton for her PhD.

“I am so thankful for FANS [Financial Assistance for Nunavut Students]. Without that I would not be able to pursue my education,” she said.

But it doesn’t cover everything. So the ACUNS $10,000 scholarship will be a big help, she said.

Over the long years in school, Zawadski said she often had to manage on her own.

Along the way, many encouraged her to persevere, particularly her parents, Brian Zawadski and Maggie Putulik.

“To be honest I am doing this research because they are very interested in this topic,” she said. “I am reading these 50 books and they are asking, ‘can I read that book when you’re done?'”

Zawadski said the legacy of her late great-grandfather Victor Sammurtok, an acclaimed artist, also inspires her.

“I heard stories about how he was meticulous … and he inspires me to give that focus and that drive for detailed work.”

And then there are her memories of Leonard Putulik, her late grandfather, who was a runner like her.

Zawadski is by nature someone who looks ahead: “I am very goal oriented. And when I set myself a goal, I get it done,” she said.

In ten years, Zawadski said she is hoping to be a curator in a large museum and a university professor.

But her life likely won’t be in Nunavut.

“That’s the thing. I would love to stay here. This is where my kids call home. My family is here but even as a curator where can I work in Nunavut? And a professor? There is no job for me. I am forced to look for a job down south,” she said.

Zawadski has worked in Rankin Inlet for the GN as its Inuit art curator, choosing the Inuit art displays at the Iqaluit airport, as well as managing Nunavut’s collection at the Winnipeg Art Gallery, where she has also been involved in curating exhibitions. 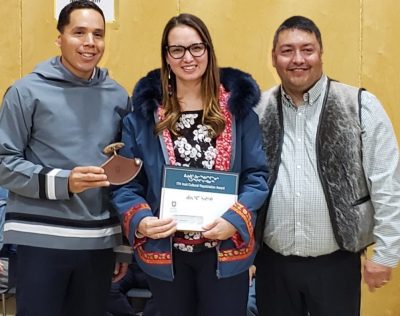 Previously, in 2014, Zawadski also participated in the Smithsonian’s Summer Institute in Museum Anthropology at the National Museum of Natural History, Washington, D.C.

Her research there focused on art motifs of traditional Inuit and Yupik tattoos and the motifs found on needle cases or kakpiit across the Arctic.

She also worked for the Kivalliq Inuit Association in Rankin Inlet, where she was involved in geographic information systems work and in a place names project, consulting with communities and digitizing traditional ecological knowledge onto maps.

That award is presented to an organization or an individual who demonstrates leadership in recognizing and respecting Inuit cultural rights and works to overcome the misappropriation of Inuit cultural heritage.

Zawadski said her research on Qatiktalik for her PhD thesis should also produce exhibitions, videos and a book, which she plans to share with everyone who contributes to the research, as well as with the public.