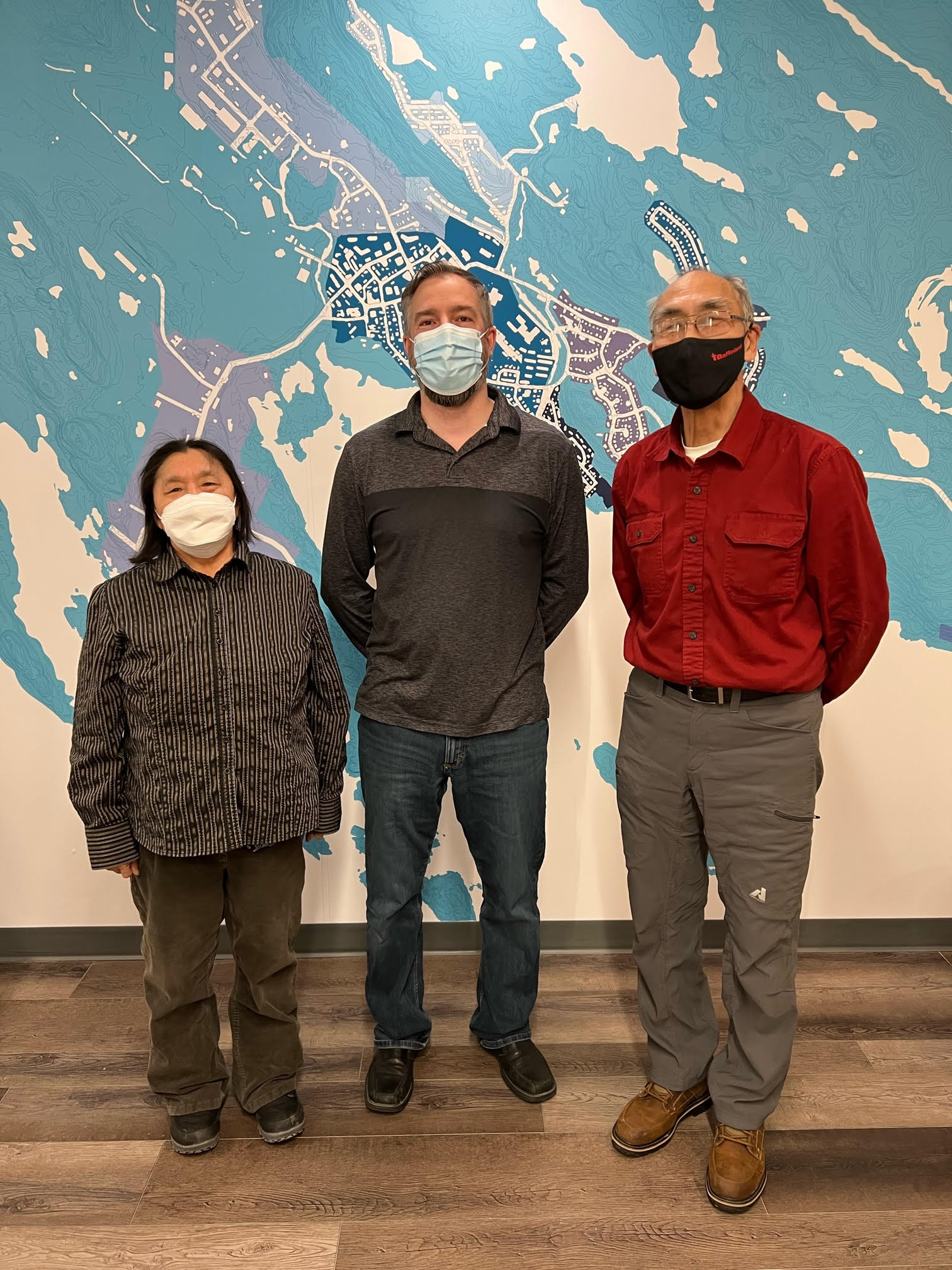 From left to right: Coun. Ookalik Curley, Mayor Kenny Bell and Coun. Paul Quassa pose for a photo outside of City of Iqaluit council chambers Tuesday evening, after Curley and Quassa were chosen by ranked ballot to fill two empty seats on council. (Photo courtesy of Aleksey Cameron/City of Iqaluit)

Iqaluit city councillors have chosen Ookalik Curley and Paul Quassa to be their new colleagues.

The pair will fill two council vacancies that were created last year by the resignations of Janet Pitsiulaaq Brewster and John Fawcett.

The vote to fill the seats took place during Tuesday’s regular council meeting.

The city asked residents to apply for the open positions throughout February, rather than choosing the next two runners-up from the 2019 election. There were seven applicants by the end of the month.

Each of the seven applicants answered two questions during Tuesday’s meeting. The first question was, what can you contribute if you are appointed as a city councillor, and the second was, what do you think the most important qualities of a city councillor are and why.

Curley gave her speech in Inuktitut.

She told council she was born about 110 kilometres from Iqaluit and has spent her entire life in Apex and Iqaluit. She is a former vice-chair of the Nunavut Human Rights Tribunal, a member of the Nunavut Labour Standards Board, and an employee of the City of Iqaluit and Government of Nunavut.

Curley became emotional when speaking about why it’s important to run for council and about her mother and father, who have died.

“These elders, I want them to be remembered. It’s because they wanted us to have a good future by being involved [as] councillors, lay workers at churches, or work somewhere, that is why we are here today,” she said.

“Our ancestors that have left us [have] guided us very well.”

Quassa, a former Nunavut premier with years of political and administrative experience, shared ideas about how he thinks the city can progress.

“There’s an opportunity where we can work with other institutions,” he said, adding that the city should explore more public-private partnerships.

“We have a lot of corporations here, right in our city. We have mining companies. Now, if they want to be good corporate citizens, I think we can work with them, and I think it’s very important.”

After applicants gave their answers, councillors filled out ballots, ranking the candidates.

Lili Weemen, Kimberly Smith, Noah Papatsie, Samuel Tilley and Swany Amarapala were among those who were not voted in.

The results were announced shortly after 7 p.m., and passed unanimously by council moments later to make it official.

“Thank you to everyone who put their name in,” Mayor Kenny Bell said. “We really appreciate it.”