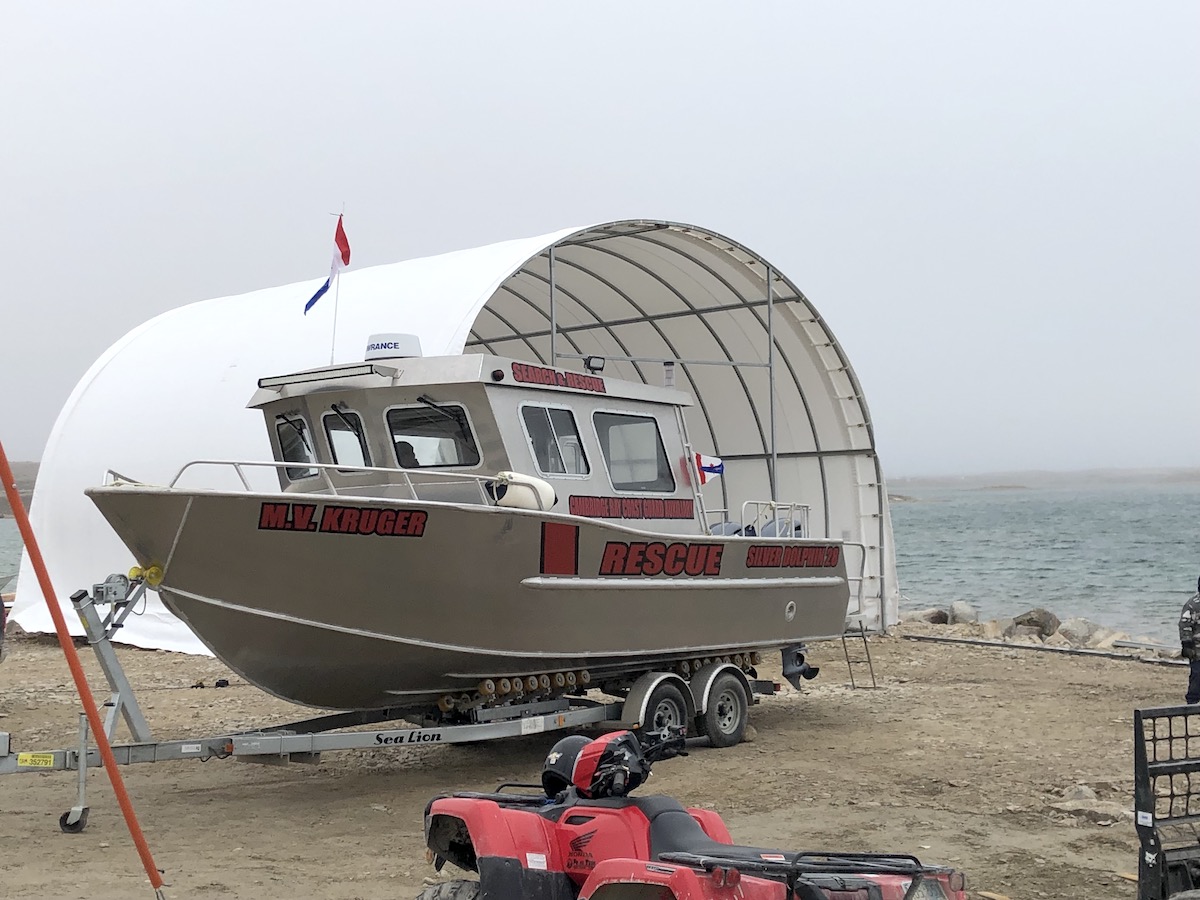 Here you can see Cambridge Bay’s new rescue boat, the MV Kruger, beside the Quonset hut that was supposed to shelter the vessel during the winter. But a stop-work order was handed down by the Government of Nunavut in September after a local resident raised his concerns in Iqaluit. This means the Quonset remains unfinished. No work will resume now until the hamlet amends its zoning bylaw for open spaces, and the developer applies again for a development permit and then obtains a building permit. (Photo by Jane George)

CAMBRIDGE BAY—A half-finished Quonset hut by the shore in Cambridge Bay has become a visual reminder of this western Nunavut town’s growing pains.

Construction work on the structure, which was intended to shelter its new Coast Guard auxiliary rescue boat, was shut down in mid-September.

The exchanges of emails that led to this work stoppage reveal missteps as this growing community of about 1,800 moves ahead with its ambitious development plans.

Meanwhile, the future of the Quonset structure, whose walls were flapping in 70-kilometre winds this past weekend, remains uncertain.

In August, Gordon Bligh, who lives across the street from the site, noticed that many big rocks had been pushed out beyond the high-water mark and that a pad was being prepared there.

At that point, he said he wasn’t even aware that in April the hamlet had established lease boundaries and later approved a development permit for the lot.

Bligh tried to get municipal officials to respond to his various concerns about the site and its preparation, saying work had “created a safety hazard for those that will not remember that there are huge boulders in that area for this skidoo season.”

Bligh said he was also concerned that the hamlet had altered their lot development and land use plan, which is completed though community meetings and consultations.

Bligh wrote the hamlet repeated emails but he said he felt his concerns were brushed off.

Bligh then wrote a letter on Sept. 13 to Constance Hourie, the deputy minister of Nunavut’s community and government services department.

On Oct. 4, Hourie wrote back to Bligh.

She confirmed that the proposed development of the lot did not conform to the hamlet’s open-space zoning bylaw.

That’s because the maximum area for any building is 36 square metres and the maximum height is four metres on such an open-space lot—”both of which are exceeded by the Quonset building,” she said.

The municipality will be required to amend its zoning bylaw to allow the Quonset to go up. This will require a public hearing, Hourie said.

After that, the auxiliary will have to apply for a new development permit once the zoning bylaw has been approved, she said.

This process will offer Bligh two occasions “to address your concerns to the municipality regarding this project,” she said.

By the time Hourie answered Bligh, work had been stopped on the Quonset.

The Government of Nunavut building officer, Mel Bursey, had stopped by to deliver a stop-work order on the construction for the first time shortly after Bligh wrote to Hourie.

The stop-work order was delivered to Wilf Wilcox, the contractor on the Quonset construction and owner of Jago Services Ltd., as well as the unit leader of the Coast Guard auxiliary.

That move to stop construction took place around the time when the auxiliary held its low-key Sept. 14 official “launch” of the new boat, the MV Kruger, named after Jack Kruger, a former RCMP officer and Coast Guard auxiliary trainer, who died in 2014 at 68.

But, among other things, the Quonset building appears to lack that permit.

The hamlet now plans to move ahead with a meeting to amend its zoning bylaw after the new mayor and councillors are elected on Oct. 28.

Wilcox is among those running in the election for a seat on Cambridge Bay’s municipal council.

Some in Cambridge Bay suggest that the Quonset should be moved to the other side of the bay, near the tank farm. That’s where the Martin Bergmann research vessel is pulled out of the water in the winter and where there is a suitable ramp for the rescue boat to enter the water.

Cambridge Bay’s Coast Guard auxiliary then received additional money in 2019 from the Department of Fisheries and Oceans to have the Silver Dolphin aluminum-hulled boat shipped and to cover the costs of the lot’s land lease, about $56,000.