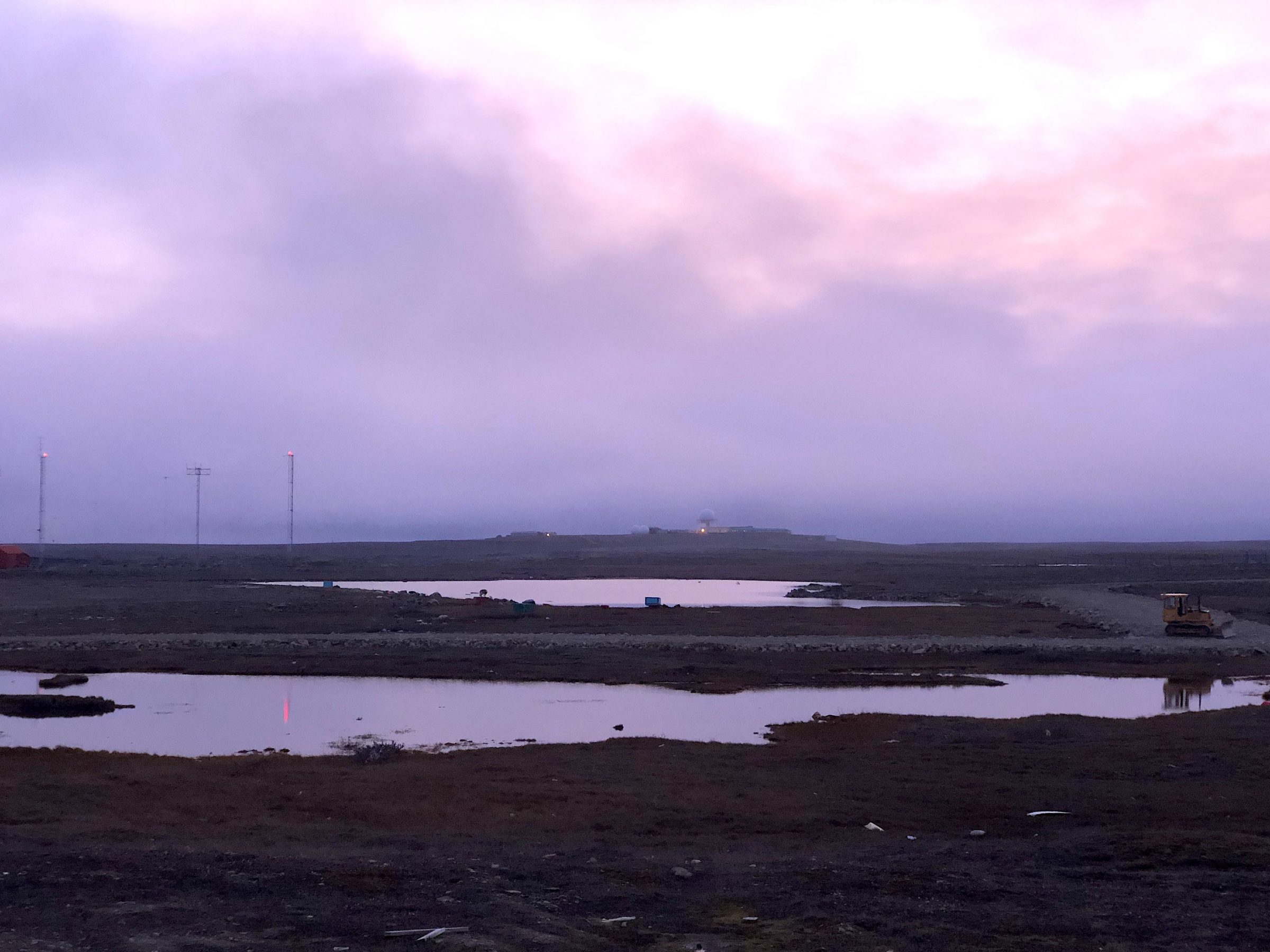 The sun sets over Cambridge Bay, with the North Warning System radar in the background. Someday soon two hotels will share this view as the area is built up. Hotels, a recreation complex and conference centre are all part of this western Nunavut’s plan for the future. (Photo by Jane George)

CAMBRIDGE BAY—Surprise, surprise: the western Nunavut hub of Cambridge Bay, whose official population was about 1,760 in 2016, has recently ballooned to perhaps as many as 2,000 or so residents.

When the location of the Canadian High Arctic Research Station was first announced in 2010, things started to change for the community, says Cambridge Bay’s senior administrative officer, Marla Limousin.

“It was an impetus for development,” Limousin said of CHARS, whose castle-like science building is so tall that its round turret peeks above roofs around Cambridge Bay where you least expect to see it.

With CHARS, Cambridge Bay became a priority for new infrastructure, such as the $11-million hamlet office, which opened in 2015.

The community also received a new water treatment system, tank farm and airport expansion, as well as new garbage and sewage trucks and a fire truck. 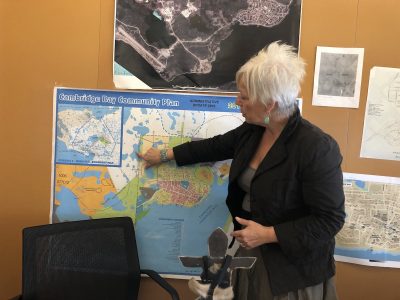 Marla Limousin, the SAO of Cambridge Bay, points to some of the areas slated for development under the town’s updated community plan. The hamlet plans to take a census of all the residents who live in the community to get a better idea of its actual population. (Photo by Jane George)

And, for the municipality and territory, this meant that demand for services increased. Along with that came a growing need for more housing for staff to deliver these services.

To meet that need, 75 units have been built in the past three years.

The town continues to grow: there’s a new subdivision, now dubbed Aurora Heights, where already you can see a modular eight-plex under construction.

It’s being built by a local company called Illu Inc. whose owners, Cynthia Ene and Solomon Amuno, say their goal is to build affordable staff housing for tenants.

Rent for a 1,140 square-foot, two-bedroom, two-bathroom unit in the new building will come in at about $2,500, including utilities—inexpensive by Iqaluit standards.

Right now, the new eight-plex sits at the edge of an empty subdivision that someday soon will also contain some of the tiny homes—or “smart homes, small homes” as Limousin calls them—Cambridge Bay wants to build to deal with its chronic lack of housing.

These affordable homes could be overseen by a non-profit society, Limousin said.

Soon, not far from that new subdivision, there will also be two 40-bed hotels. These will be built by local companies, one by Illu and the other by Bruce Peterson’s Inuksuk Enterprises Ltd. which owns, among other ventures, the Green Row suites and other businesses.

Limousin said the municipality also has plans to build a conference centre and recreational complex.

“We can pull more (meetings) from Yellowknife because in Yellowknife you can’t even get hotel rooms, and we’re only an hour and a half away (by air,)” she said, referring to the crunch on hotel rooms in the Northwest Territories capital due to, among other factors, an increase in tourism from Asia.

Another task for the municipality will be to clean up the town’s aging core. That will involve cleaning up the moldy former town office and arena, and seeing whether the curling rink, which has been thought of as a possible new recreational space for children, can be transformed into a greenhouse.

Not everything has been smooth as Cambridge Bay forges ahead: a recycling program stalled not long after it started in 2015, although you can still see the grey and blue bins everywhere.

And a pilot project that would use gasification, a process that uses high temperatures to convert organic materials and biodegradable waste into energy, encountered technical issues right from the start.

But now Limousin said “we have a vision of where we’re going.”

“That vision is being created by a planning process with the public. We’re not making any of these decisions in isolation,” she said.

Another community development meeting is scheduled for Oct. 15 in Cambridge Bay, from 6 p.m. to 9 p.m. at the Luke Novoligak Community Hall, where people will continue to discuss process and planning.

This story has been updated to specify that the $2,500 rent for a two-bedroom unit includes utilities.