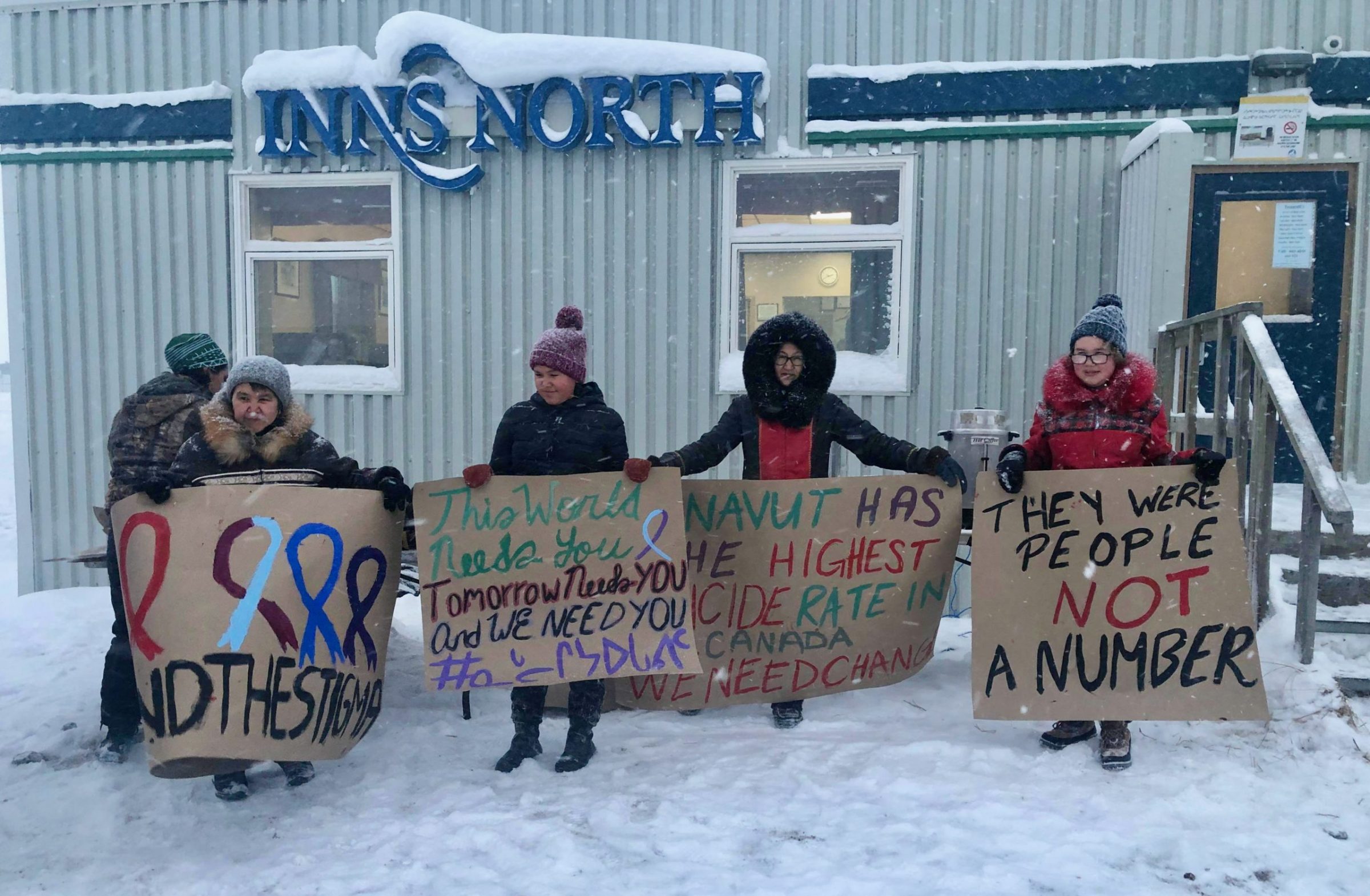 A group of people in Rankin Inlet gathered on Sunday to rally for more mental health resources and to end the stigma around mental illness. (Photo by Veronica Conelly)

Rankin Inlet residents of all ages marched to end stigma about mental illness and rally for more resources to address high suicide rates on Sunday.

“There’s just too many people dying by suicide in Nunavut,” said Meagan Akumalik Netser, one of the organizers.

Netser said about two dozen community members joined the walk, beginning and ending at the Turaarvik hotel, despite snow and winds gusting up to 50 km/h.

The march came about two weeks after a similar rally was held by Iqaluit youth.

With the highest suicide rates in Canada and some of the highest rates in the world, Netser said Nunavut needs change.

On top of needing more mental health resources like staff and programs, Netser said work needs to be done to reduce the stigma around it.

“People just need to know there is help available and that it’s OK to ask for help,” she said.

Some help does already exist in the community. Rankin Inlet has a men’s healing group that meets once a week and Embrace Life Council’s Healing Through Talking program is available to Nunavummiut over the phone.

But Netser said she’d also like to see someone in each school and workplace trained in mental health and psychological first aid.

Even though there are more mental health professionals in Rankin Inlet than in some smaller Nunavut communities, with two permanent and one short-term mental health nurse in town, Netser said it’s not enough.

She said the transient nurses mean well and are often passionate about helping people, but it’s not ideal to have mental health workers on short-term contracts.

“It’s like playing telephone, your story gets passed on and diluted and it’s a painful story to tell,” she said.

Glenn Woodford, the retail store manager at Rankin Inlet’s Co-op, said he got involved in the march to support his friends, staff and community members.

Woodford said he has reached out for mental health help in the past, but after a few sessions the mental health nurse he was seeing stopped working in Rankin Inlet.

“That’s frustrating and it happens up here all too often,” he said.

“It frustrates people to no end, like, ‘What’s the point of going and asking for help if the person you are expected to confide in and trust is going to leave,’” he said.

Woodford said when suicides happen in Rankin Inlet, they have devastating, long-lasting and profound effects on the community of about 3,000.

“When I go to work and there’s a report of a suicide in the community I can see it in my staff,” he said.

As a father of three, Woodford said he also sees the negative effects on his children.

Woodford said he hopes Nunavut’s new MLAs will pay attention to these issues and find solutions.

P.J. Akeeagok, Nunavut’s premier, said in a Nov. 25 interview that he’s proud of those leading the charge on mental health issues lately, and thanked those in Rankin Inlet fore making their message known.

“They’re using their voice to ensure that there’s actual change coming,” he said.

If you’re experiencing emotional distress and want to talk, call the Kamatsiaqtut Help Line, which is Nunavut-specific and offers services in Inuktitut. The phone number is 979-3333 for Iqaluit residents and 1-800-265-3333 for other Nunavummiut.

The First Nations and Inuit Hope for Wellness Helpline is also available at 1-855-242-3310 or you can chat online at hopeforwellness.ca.